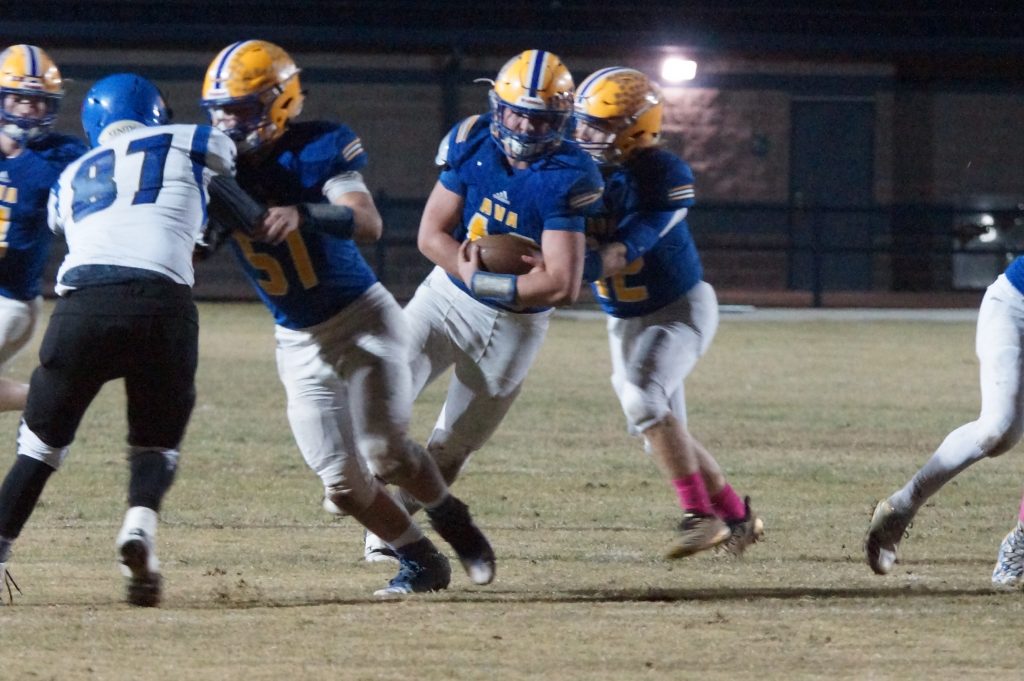 There was no slowing down the Bears Firday night as they took on the Forsyth Eagles in the first round of the district playoffs.

The Ava Bear hosted the Forsyth Panthers in the first round of district play Friday night. There was no splashing around in the mud this week at Harlin Stadium, but the Bears mad a big splash in the scoreboard, letting their future opponents know they are ready to go the distance this season.

The Bears came out strong against the Forsyth Panthers, who are only in their second season with a varsity football program, and were only able to play the main twelve starters through most of the 1st quarter and into the second quarter. The Panthers received the ball to start the first quarter of play, but are held to negative yards, Josh Bray, able to squeeze through the defenders to block Forsyth’s first punt of the game and the Bears take over on the 8 yard line.

This is where the Bears begin to shine under the lights Friday, Steven Copeland scores on the 1 play of scrimmage for the bears, Caden Myers barrels in for two, making it an 8-0 ballgame at the 10:05 mark of the first quarter. This would be the first of six touchdowns in the first quarter.

Kayden Myers would see the end zone next, as he would barrel through the defenders from three yards out at the 6:12 mark of the first quarter. Two point conversion pass was no good making it a 14-0. Nate Swofford made an unbelievable one handed interception to set up another scoring drive. Steven Copeland would score for the second time in the quarter, and only touching the ball twice the whole game, from 34 yards out as he would coast in for six more at the 5:30 mark.

Nate Swofford, back to return as Forsyth would punt the ball once again, and Swofford would have an impressive run as he beats several defenders downfield. With just 2:47 left to go in the first quarter Caleb Johnson would find Zach Mendle downfield to score from 20 yards out. Caleb Johnson would kick the point after, making the score 37-0. This would not complete the scoring for the Bears in the first quarter. Steven Copeland would intercept the ball and run it all the way down to the 10 yard line, setting up an impressive run by Josh Bray to get across the goal line. Caleb Johnson kick would be good, ending the first quarter of play and 44 unanswered points by the Bears.

Ava would recover a Forsyth fumble early in the second quarter. Nate Swofford would cap it off with a twelve yard touchdown run, Caleb Johnson’s kick is good giving the bears a 51-0 lead early in the second quarter. This is where Coach Swofford and the staff would bring in some fresh jerseys. The rest of this game would be played predominately by the junior varsity players on both side of the ball. Sophomore, Martez Pearson, would score for the first time in varsity play from two yards, showing his quick speed. Caleb Johnson would kick another point for the Bears, making it a 58-0 ball game at the 7:43 mark of the 2nd quarter. Zach Richards, freshman, getting a lot of time under center Friday night, scores from seventeen yards out on a QB keeper at the 3:42 mark of the second quarter. This would compete the scoring for the first half of play, at 64-0 Bears.

Colby Miles would complete the scoring for the Bears at the 6:48 mark of the third quarter. Miles would score from 31 yards out, a very impressive run from the sophomore. Zach Richards would run in for two, completing the 72 unanswered points by the Bears.

Ethan Pederson, Waylin Moon, and Anthony Merritt slammed shut any possibility for the Forsyth Panthers to move the ball Friday night, and prove to be getting better every week. Bray, skillfully catching the opposing QB off guard, comes out with his first sack in district play.

The Ava Bears are playing good football when it matters, each week getting better. The Bears will see Mtn. View-Liberty Eagles Friday night for the second time this season. The Bears beat the Eagles 24-14 early in the season. But you can bet the Eagles will show up ready to play at Silvey Field, but the Bears are on a 9 game winning streak and aren’t ready for this season to end. Friday night’s winner will move on while the loser goes home and the season is over.