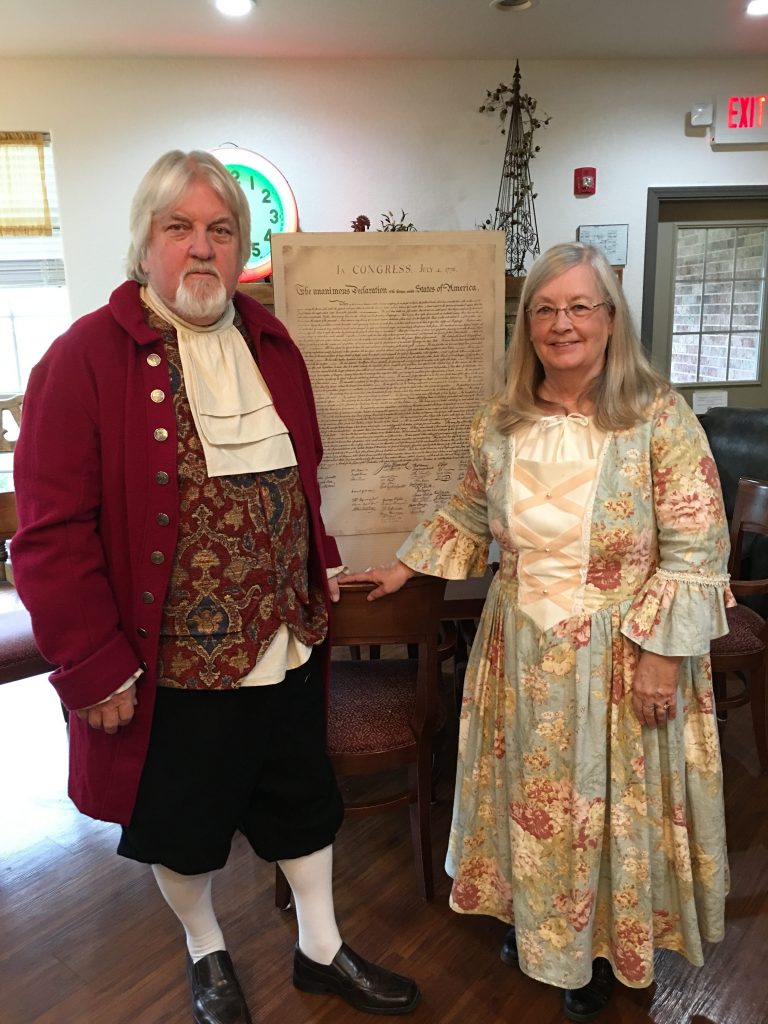 Charles & Patti Knight delivered a program on The Declaration of Independence wearing full historical costume with a replica of the nation’s earliest document.

Wright County Retired Teachers and All Other Support Personnel Meeting was Tues. 10/16/18.

Karen Sinning reported that it was time to renew state dues and also pay local dues.  We also donated to the WCCH for their auction.

Branson fun days are this week. Region 10 today Friday on 10/19/18 @ 9am in Cabool.  Vickie Stewart was our Distinguished Retiree and will be honored at the Region 10 meeting.

Volunteer hours are due at the November meeting.

New Business: Date for Christmas Party will be discussed at November meeting.

The Program was given by Charles and Patti Knight to teach us about The Declaration of Independence.

Dyanna Shaver and Sue Durden voted to approve the minutes.

Next month’s meeting is Tuesday, 11/20. Hannah Kelly will be our speaker.  The meeting will be at the Country Living Assisted Living Center in Mountain Grove at 10am.

Jimmie Marler has a One-Man Art show at the Harlin Museum at West Plains from Wed. Oct. 24 through Nov 17th. The Museum hours of operation are Wed-Sat from noon till 4pm. He has a Gala Night for his show on Nov. 2nd from 6pm-8pm.  Jimmie has donated prints for  the Region 10 fundraiser.

Janet Atchison and Dottie Killough made a motion to adjourn.