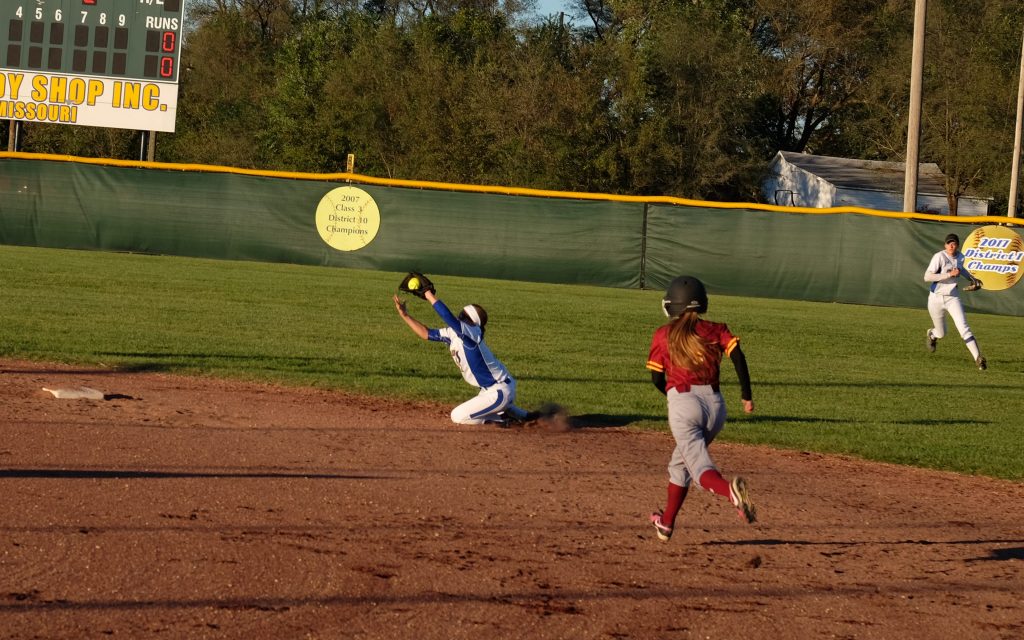 2nd baseman Ashton Bewley fights off the sun as she snags a line drive last Thursday against the Mansfield Lions.

Drawing the #2 seed in the Class 2 District 11 tournament Ava awaited the winner of the Mansfield/Seymour matchup. Willow Springs, with the #1 seed, would matchup up with the winner of the Hartville/Gainesville game.  Willow would learn their opponent first as Hartville steamed through Gainesville 17-2. Ava would learn soon after who they would face off against as Mansfield just got by Seymour 6-5.

In the semifinal matchup, Willow Springs showed why they were the number one seed as they shut out the Hartville offense that had just scored 17 the day before 10-0.

The Lady Bears semifinal game held little suspense as the Bears jumped out to a quick five-run lead after the 1st inning of play. Tacking on an additional run in the 2nd Ava carried their 6-0 advantage to the 5th where Mansfield made the game interesting as they scored 3, cutting the Ava lead in half. The threat was shortlived though as Ava got the 6 run lead back scoring 3 in the bottom of the 5th. With another 2 runs in the Ava half of the 6th, the Lady Bears put the game away. Mansfield would make some noise in the 7th scoring 2 but Gracie Heinlein induced two groundballs to end the threat and Mansfield’s season as Ava advanced to the district finals on the strength of an 11-5 win.

A cold, wet, cloudy day greeted the Lady Bears as they prepared to take on the hard-throwing Sydney Miller and the rest of the Willow Springs Bears Friday. In their last meeting, October 1st, Miller and the Willow Bears had little difficulty dispatching Ava 10-3 as Miller struck out 10 that afternoon. This time Ava prayed it would be different as they fought for the district title.

Ava would lead off the top of the 1st, playing as the “road” team in this game. Miller made her presence known right away striking out the first two Bears. Ashton Bewley would be the first to at least put the ball in play as she lined out to right field. Willow wasted no time in jumping to a 2-0 lead three batters into the game after a hit batter and error put two on base. A passed ball scored the first run then a ground ball single to center scored the second. Gracie Heinlein and the Lady Bears buckled down from then on to limit the damage inducing a double play and a pop out to escape the inning.

In the 2nd Ava would cut the Willow lead in half. Miquia Heinlein walked and was replaced with Hailey Nelson as a courtesy runner. Nelson would steal second base and would score on Julia Henry’s RBI double to center. Another pair of strikeouts would allow Willow to close the inning stranding Henry at second. Ava nearly shut down Willow in the 2nd after turning their second double play of the game, erasing the runner on base after an error. The third out proved to be more elusive though as Willow Springs followed that up with a double, an RBI triple and an error by Ava allowed the fourth Willow Springs run to score. After 2 innings Ava found themselves down 4-1.

The Lady Bears showed life though in the 3rd. A strikeout followed by a pair of walks to Kiaunna Snow and Macey Phillips got the Bears into scoring position. Snow would be erased at third on Ashton Bewley’s fielder’s choice ground ball for the second out. Regan Koop got the line moving though as she loaded the bases with a single. From there Ava would score 5 runs as Miquia Heinlein walked, while Henry and Taylor George each picked up singles. Willow helped Ava out as they committed a pair of errors in the inning before Miller finally escaped the inning picking up another strikeout. In the 3rd Ava would finally hold Willow to less than two runs as they managed a lone run aided by an error by Ava. After the first three innings of play, Ava clung to a 6-5 lead.

With a chance to pad their lead the Lady Bears went quietly in the 4th losing their lone baserunner to a caught stealing at 2nd. Willow Springs went to work in their half of the 4th. Miller helped herself with a leadoff triple. Two pitches later Willow tied the game on an infield single. Two more singles and a 2 run triple had Willow Springs up 9-6. Ava would shut down from there as Willow Springs hit into their third double play of the game followed by a groundout to short pushing the game into the 5th.

Ava would make some noise in the 5th with a two-out RBI double by George pulling the Bears to within a run, 9-8. Willow Springs would answer back as they have all game, scoring 4 in the bottom of the 5th, and push their lead to 5, 13-8.

With the game looking bleak for Ava entering the 6th the Lady Bears gave the home crowd a glimmer of hope to hold on to as they mounted a two-out rally, scoring three, cutting the Willow lead to 2, 13-11.

Willow Springs didn’t let the good times last long though as they scored another three runs in the bottom of the 6th taking their lead to five runs, 16-11.

Ava entered the 7th inning knowing it would take a huge inning just to tie the game. It started off well as Julia Henry reached base on an error by the first baseman. George would push her to third on a double to left. After that Sydney Miller shut Ava down as she struck out the next batter, got a first-pitch ground ball out and then put the game away as she struck out her 12th Lady Bear to secure the district championship.

Five Lady Bears were named to the All District squad as Ashton Bewley, Kiaunna Snow, Gracie Heinlein, Miquia Heinlein and Macey Phillips all received the honor.