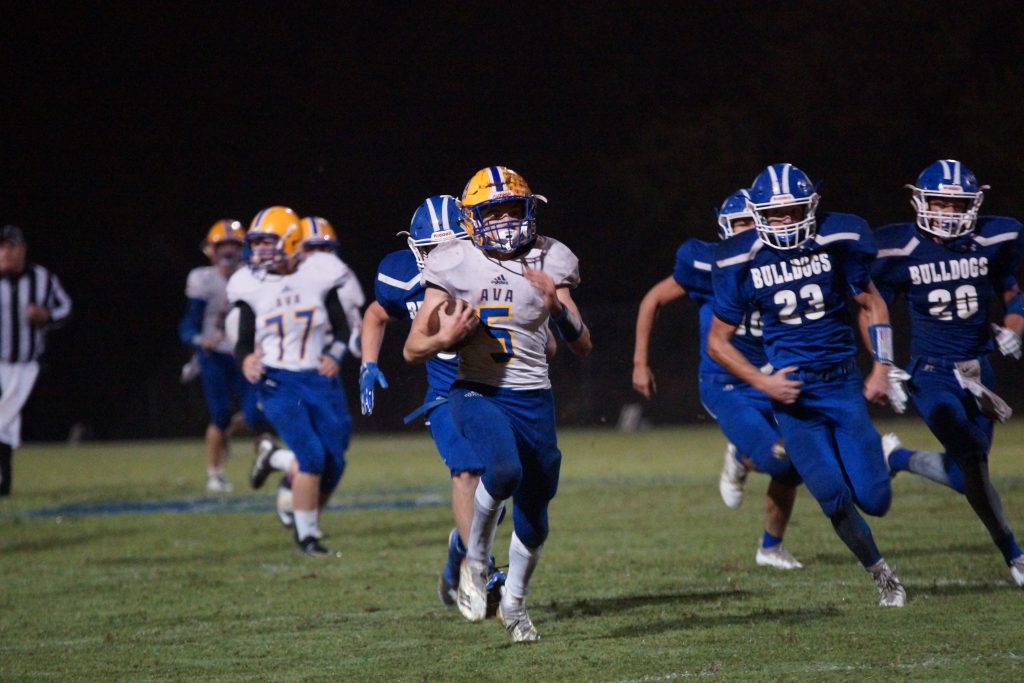 Nate Swofford and the rest of the Bears offense was off to the races Friday night in Cabool as there scorched the Bulldogs for 58 points.

Can the Bears keep their 6-week winning streak? The last three the Bears have been able to shut out the opposing team, putting up some big numbers on offense as well.

The Bears were facing the Cabool Bulldog in The Pit with rain and cold weather on the mind.  Ava was trying to sweep the Bulldogs and next week the Willow Springs Bears to go undefeated in the SCA Conference two years in a row, and win an outright conference championship.

The Bulldogs received the ball to start the fight within the pit, and boy did they come out guns blazing. The second play from scrimmage the Bulldogs were able to break free on a dive play up the middle putting the Bulldogs on the board first after a 60 yard run just minutes into the game.

The Bears though are able to strike back quickly and often through the next four quarters. Steven Copeland starts the scoring for the Bears, as he gets outside with his speed at the 9:05 mark of the first quarter. The extra point, no good making it 6 all, after the first possession of play.

The defense of the Bears will not be fooled again, as Josh Bray is able to keep the Bulldogs from getting a first down.

With the Bears offense clicking on all cylinders the offensive line of the Bears gives Caleb Johnson enough time to complete a beautiful pass to Copeland to put another 6 points on the board at the 5:05 mark of the first quarter. Copeland, able to get the ball in the end zone for the two-point conversion, makes it a 14-6, Ava lead.

Waylin Moon, as Cabool is fighting to get the first down, gets another sack, holding the Bulldogs once again on downs and forcing them to punt.

Johnson with yet another pass down the field to Nate Swofford sets up a 3-yard touchdown run by Copeland at the 8:04 mark of the second quarter. Myers is able to fight the defenders up the middle to get the two-point conversion. 22-6 Ava Bears lead and they don’t look back.

Josh Bray gets a big hit on the corner forces a fumble and the Bears are able to recover it. Within less than a minute, the Bears score on a pass from Johnson to Zach Mendle at the 7:27 mark of the second quarter. Nate Swofford gets in for two, making it a 30-6 ballgame.

The Bears received the ball to start the second half of football and drive down the field, but fumble close to the 20-yard line giving the ball back to the Bulldogs.

Myers is able to redeem himself by intercepting a Bulldog pass and running it all the way back to the Bears end zone. Johnson kicks in the point after, and give the Bears a 45-6 lead at the 7:45 mark of the third quarter.

With the big lead Coach Swofford starts rotating people in the lineup. Swofford who was put in at the quarterback position breaks a 66 yard run on a QB keeper up the middle. The point after by Johnson was no good, making it a 51-6 ball game.

Steven Copeland is able to score one more time in the third quarter from 60 yards out with less than a minute left to go in the third. Johnson’s kick this time is good, completing the Bears 58 unanswered points on the night.

Coach Swofford and the coaching staff begin rotating in fresh players into the game in the fourth quarter.

The Cabool Bulldogs were able to score one more time with 8 minutes left to go in the game,58-13 after the successful extra point.

The Bears are on a hot streak of 7 wins. With the regular season winding down, the Bears are getting better every week. A win over Willow Springs Friday night should put the Bears with home field advantage going into district play and seal the SCA Conference championship two years running.