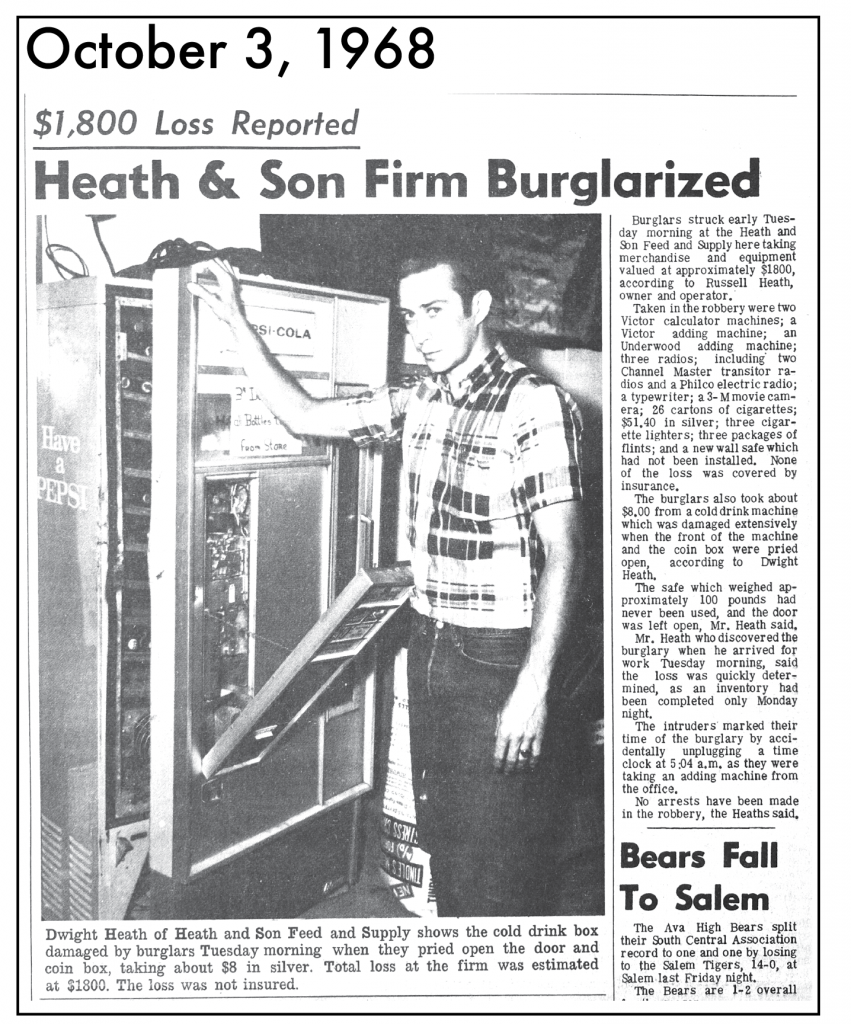 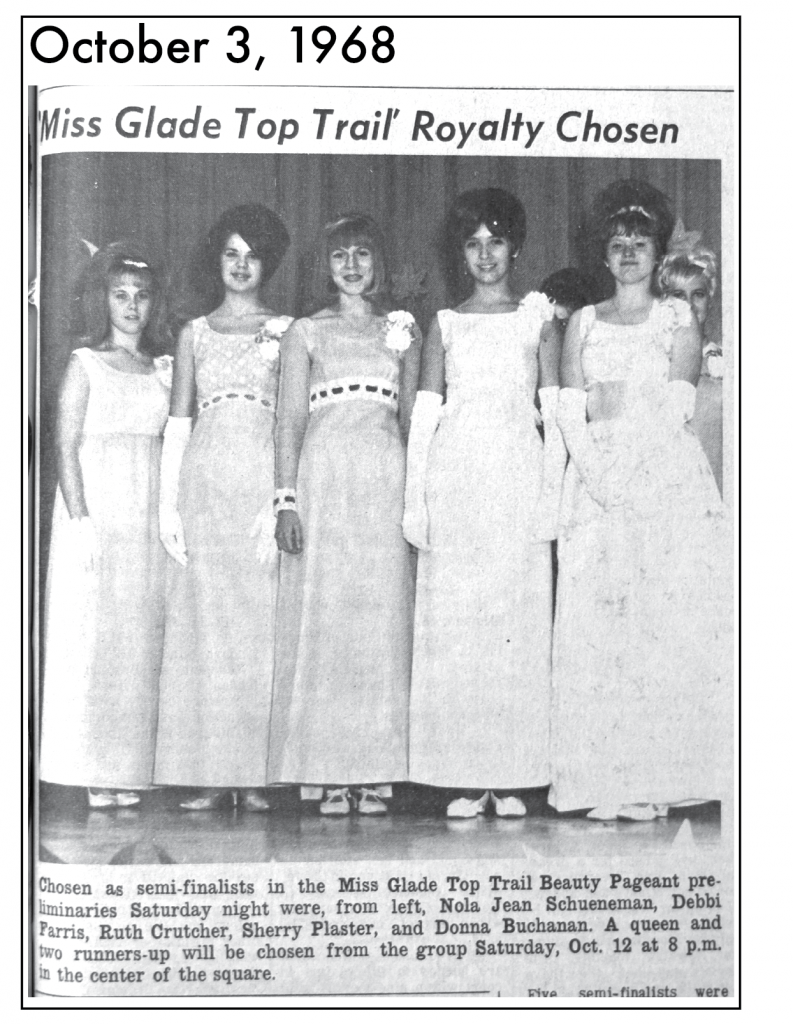 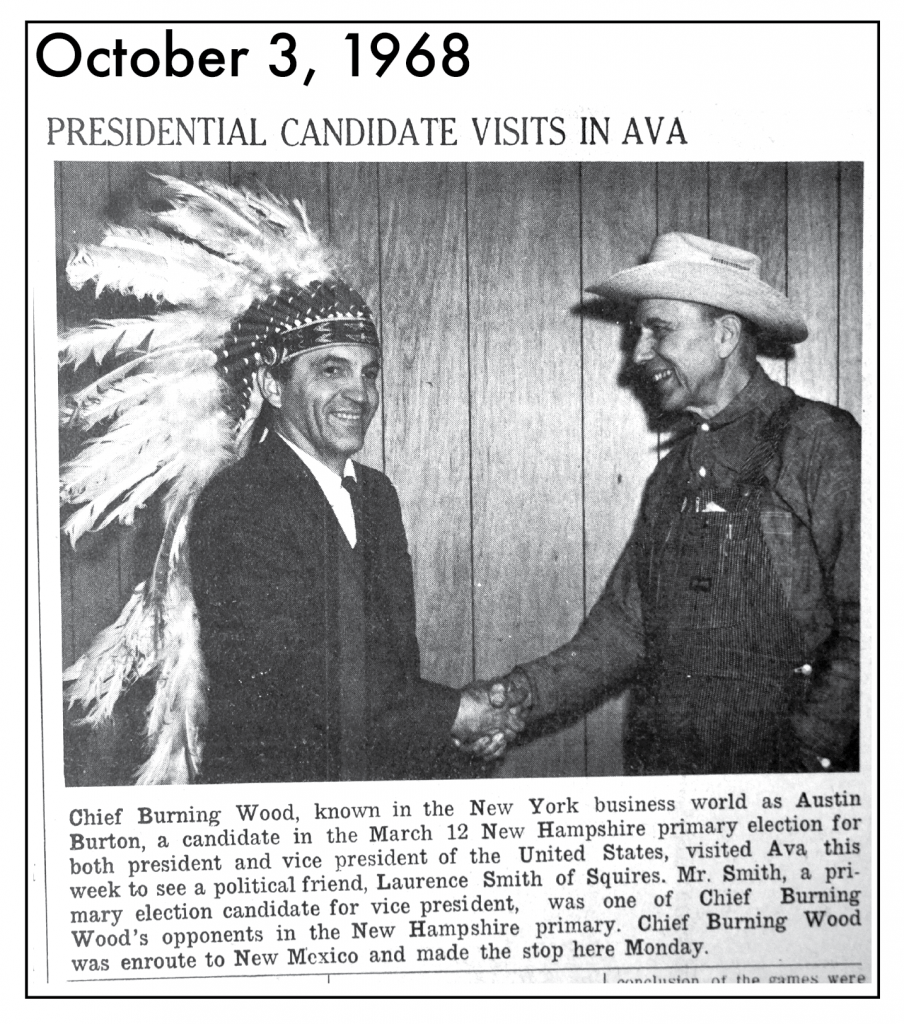 Bill and Delores (McClure) Cradic will celebrate 40 years of marriage on Oct. 17.  The couple were married in Pacific, Mo., in 1953 and now reside in Ava.

Ava backs averaged more than 6.5 yards per carry at Cabool last Friday night as the Bears roughed up the Bulldogs, 48-12, in South Central Association action.  But the Bears age getting set this week for what could well be the biggest game of the season as the Salem Tigers come here for an SCA Showdown that will also be homecoming for Ava.

Mellanie and Anthony Potter wish to announce the birth of their baby brother, Richard James Potter, Jr., born September 24 at 4:46 a.m. in Texas County Hospital. He was 7 lb. 14 oz. and 19-1/2 inches long.

Max and Nancy Bushman of Kimberling City, Mo., came to Ava Wedsnesday last week, and they were accompanied to their home by her sister, Beulah Gentry.

ALMARTHA –– Kenny and Erma Karr of Ava and Mr. and Mrs. Carl Ray all went to Mt. Home Sunday and had dinner and did some sight seeing.

ONGO –– It turned cool again after another rain. The roads are still bad from the flood we had. The little bridge at Punchin Creek isn’t safe to cross, but people have to cross.

MT. TABOR –– Brandon Reed was a weekend guest of his grandparents, Mr. and Mrs. Don Beason.

SMALLETT –– Visiting in the home of Arlean Henningsen Wednesday night and having dinner and playing games were Joe Cox, Albert and Joyce Erickison, Ray Johnson and Ora Stamper.

Burglars struck early Tuesday morning at the Heath and Son Feed and Supply here taking merchandise and equipment valued at approximately $1800, according to Russell Heath, owner and operator.

City crews began placing up baskets of fall flowers this week furnished by the Business and pRofessional Women’s Club.  Hanging the baskets are Ivory Cook, and Rick Crumley.

Mrs. Eunice Henderson of Independence visited in Ava last week with her aunt, Mr. and Mrs. J.R. Spurlock, 619 NE 3rd Avenue, and during the time she also saw other relatives and friends in the community.

Two Springfield doctors are defendants in a $165,000 damage suit filed by Wilma and Boyd Robertson of Mountain Grove for alleged negligence. The Robertsons are former residents of Ava.

Chief Burning Wood, known in the New York business world as Austin Burton, a candidate in the March 12 New Hampshire primary election for both president and vice president of the United States, visited Ava this week to see a political friend, Laurence Smith of Squires.  Mr. Smith, a primary election candidate for vice president, was one of Chief Burning Wood’s opponents in the New Hampshire primary.

Mr. and Mrs. Elmer Kilburn and son, Donnie, were dinner guests Sunday noon in the home of the couple’s daughter, Mr. and Mrs. Howard Haynes, of Route 1.

BREMERHAVEN, Germany –– Specialist 5 Bobby J. Clouse, son of Mr. and Mrs. George A. Clouse, Ava, was recently promoted to his present rank. He is a Medical Corpsman in the Outpatient Department of the 33rd Station Hospital US Army Terminal Command, Europe.

Among the items to be checked on vehicles presented for inspection under the State’s Motor Vehicle Inspection Law are the brakes.  One front wheel and drum will be removed on all passenger cars and commercial motor vehicles licenses for a gross weight of 12,000 pounds or less. This includes pickup trucks.

WASOLA –– Mr. and Mrs. Tilford Clayton, Joyce Porter and Ronnie Pinckney were in Kansas City Friday to visit Theta Clayton. She has employment there. They also called on Edgar Paul Stewart.

Jose I. Duran of Ava, a dairy manufacturing major at the University of Arkansas is among a group of girls and boys who make up the University of Missouri team which will compete against some 20 similar teams in the Collegiate Dairy Products Evaluation Contest to be held in Chicago Oct. 14 in conjunction with Food and Dairy Industries Expo 68 at the International Amphitheatre. 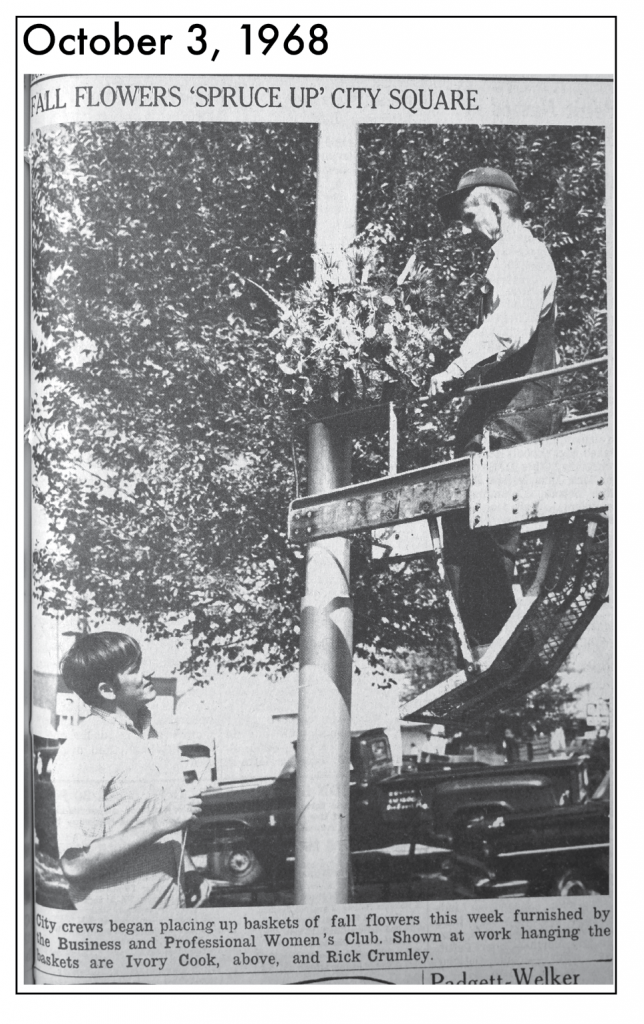 Jerry Calvin, chairman of the Douglas County USDA war board, has received announcement of a dairy payment program in which a great number of farmers of this county will be eligible to participate. The program is designed to restore feed costs to the September 1942 level without disturbing the prices of milk or other dairy products.

Elza Hutchison, machinist mate first class in the U.S. Navy, arrived in Ava Sunday and will spend a 15-day leave here with his mother, Mrs. Willie Hutchison, and other relatives. Mr. Hutchison docked in San Francisco early last week after spending 33 months on submarine duty in the South Pacific.

Floyd Hensley, who is visiting with his mother, Mrs. Sam Hensley of Mansfield, was in Ava Saturday and Sunday and visited with friends here.  Mr. Hensley who works for the Douglas Aircraft Company, has just returned to the United States after spending six months in Iceland.

Warships and planes of a strong U.S. carrier force raided Wake Island Tuesday in one of a series of lightning blows that may herald a major offensive in the Pacific, it was announced from Pearl Harbor Wednesday.

Hunters, save your used cartridges and shells, the conservation commission urges.  These can be salvaged for the brass and converted into war materials.

Private and Mrs. Joe Pitts returned to Missouri the first of this week from Chandler, Arizona after being notified of the serious illness of Mrs. Pitts’ mother, Mrs. W.D. Blankenship of Buffalo.  Private Pitts is in the Army Air Corps, stationed at Williams Field, and Mrs. Pitts is employed at the same field.

Mrs. Ethel Bean sold the Beano Cafe to Mr. and Mrs. Vandiver Upchurch Tuesday of this week, and the Upchurch’s took immediate possession of the business.  The cafe was established 14 years ago by Mr. and Mrs. Bean, and since Mr. Bean’s death several years ago has been operated by Mrs. Bean.  Mr. and Mrs. Upchurch are natives of Douglas County, having been born and reared here.

Owing to the spread of “Spanish” influenza, a few cases of which were discovered in Ava the first of the week, the Board of Health has ordered that all public gatherings including school, picture shows, churches, Sunday school, and theaters, be discontinued until further notice is given.

On August 1, 1918, the telephone system of the country went under government control. We are instructed by the government to collect $5.00 for installing each phone and where there is a change of the name from one person to another of the same phone without putting in another phone a charge of $2.00 is made.  We are subject to the regulation of the government. We have the instructions and will show them to any desiring to see them.  Very truly, Ava Telephone Co.

The kaiser put his back to a wall in the vain effort to check the allies on the western front, and the wall collapsed.  Bulgaria surrendered, practically unconditionally.  Turkey at once put out peace feelers.  Austria Hungary cried for cessation of the war, and the Ukranians rose in revolt against the Huns.  Meanwhile the allies kept up their ceaseless hammering at the kaiser’s front wall –– the Hindenburg line –– and by smashing through it at many points proved it was not the system of defense that the Germans had supposed it to be.

GIRDNER NEWS –– Lottie Bragg’s little son was recently bitten by a copperhead snake, but is alright now. Dr. James was the attending physician.

Work has started on the new garage being built by L.H. Pettit on Jefferson Street, just north from the square.

Among the cases of influenza reported in Ava are: L. H. Pettit, Cole C. Coffeen, Chas. Victor, Misses Edith and Ethel Fletcher, Ethel Hodges, the R.F. Jankins family, Master Ivan Burdett and Clifford Reynolds. The only serious case yet reported is that of L. H. Pettit.

Last year 23,895 seamen and passengers were lost on British ships. Out of every 187 sailors one lost his life through shipwreck or other accidents.

The voting of the Rio Grande men on the proposition of President Jeffery to reduce salaries 10 percent was concluded yesterday. Every indication is that the men will accept the reduction.

Congressman Talbert of South Carolina says the proudest memory of his life is that he was a rebel soldier and adds that “we are ready to fight again.”  Mr. Talbert is more democratic than discreet. The grip of the confederate party upon the government is hardly tight enough yet to warrant such frankness.

The youngest bride of the season took upon herself the responsibility of wifehood in the Vernon County recorder’s office last evening. The bride was Miss Lilly Barker, being only 14 years of age.  Her grandmother and guardian attended the marriage, giving consent.  The groom, J.W. Shelton, is 21-years old. Both are residents of Nevada Mo. It is reported that Dr. Baldwin of Ava expects shortly to become a resident of Forth, Taney County.  The removal of Dr. Baldwin will be a serious loss to the church and Sunday school interest of Ava.

The Missouri Wesleyan College in Cameron has 125 students.

In southwest Missouri, it is believed that zinc is the best material for roofing.

Dade County expects the completion of its first public bridge in January 1894.

Fifteen prisoners in the Kirksville Jail while away the hours with a mock court.

A Stone County man has patented a velocipede which is worked by the rider’s hand and arms.

The first electric railway in Siam, in the far East has been started by Dr. Robert M. Boyd, a Missourian.

Learned geologists predicted in 1851 that the lead supply of Missouri was nearly exhausted.  They were badly mistaken.

A Missourian, Rev. Ned Forrest, was the first preacher to get in a sermon on the town site of Enid in the Cherokee strip.

There is no nonsense about Judge Broaddus of Chillicothe Circuit. He lately fined a juror $50 with ten days imprisonment for neglecting to attend.

Rev. Benjamin Stevens and wife of Hannibal have celebrated the 70th anniversary of their wedding. Mr. Stevens is 93 and Mrs. Stevens 88 years of age.

After a month passed in transplanting skin from different parts of her body to her burned back, 100 pieces in all, Evalina Pace, a little girl of Salem, Dent County, lives and can walk about.

George Reynolds, the goat king of Missouri, has 100 goats on his ranch. Last spring the animals were sheared of their hair, some of which measured eight inches. The clip was sent to New York, the only goat hair depot in America, and the price obtained was 32 cents.