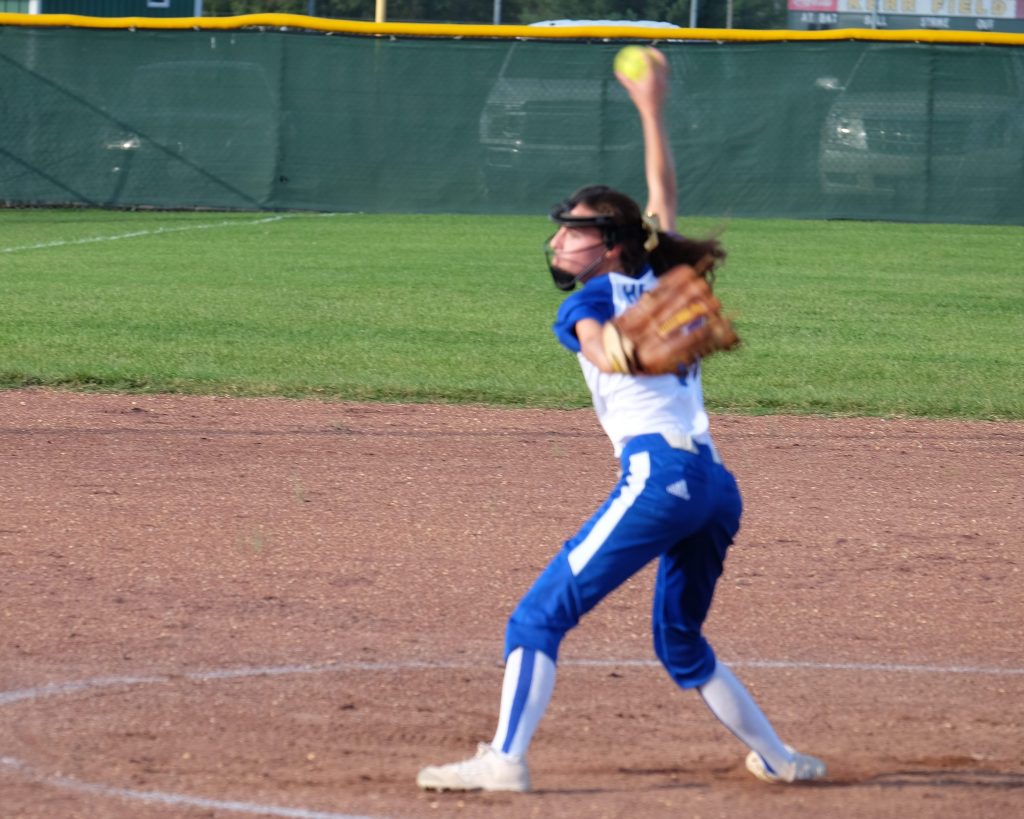 Ava pitcher Gracie Heinlein delivers a pitch in the 2nd inning of Monday’s game against the Gainesville Bulldogs. Ava would win the game 7-3

The Lady Bears would use a pair of big innings to power their way to wins this week. A five-run barrage in the 2nd inning against the Gainesville Bulldogs here in Ava Monday evening gave them all the cushion they would need as they weathered a 3 run outburst in the 7th by the Bulldogs on their way to a 7-3 win.

Against the Parkview Vikings a 4 run first inning provided all the offense the Bears would need. While the 10 run 4th inning would prove to be the backbreaker in the game that ended after 5 innings.

Gracie Heinlein gave the Bulldogs little reason to hope through the first 3 innings Monday as she held them hitless the first time through the lineup while her teammate jumped out to a 6 run lead before Gainesville could collect their first hit in the 4th. The Lady Bears would strike first in the 2nd inning. Julia Henry led off with a single, an error and passed balled moved her to 3rd before  Taylor George drew a walk. Jada Gunter would strike out but not before George was able to steal 2nd. Araina Evans would drive in the first two runs of the day on a double to left. Kiuana Snow followed up with a single scoring Evans. Macey Philips would keep the line moving as she too doubled, scoring Snow, after Snow had stole second. An Ashton Bewley line drive out to center left Phillips at second but Regan Koop was able to pick up the RBI with a hit to left scoring the 5th run of the inning for Ava.

Julia Henry would again lead off the inning with a single as the Bears entered their half of the 3rd. Taylor George would draw a walk and Gunter’s single loaded the bases. A pair of pop outs by Evans and Snow put the Bulldogs on the edge of escaping unharmed but a passed ball with Phillips at the plate allowed Henry to score pushing the Ava lead to 6 runs. Phillips would ground out to the shortstop to end the inning.

The Bears would plate their final run in the 5th as Gunter lined a double to center and after Serena Stewart, who came in to run for Gunter, advanced to third on another passed ball by Gainesville. Araina Evans would then single to right scoring Stewart.

Tuesday at Parkview the Lady Bears put the pressure on early and never let up. Snow led the game off drawing a 4 pitch walk. Phillips groundout to the shortstop advancing Snow to 2nd. Koop would then get Ava on the board with a hit to right, scoring Snow and moving Bewley to 3rd. Miquia Heinlein was then hit by a pitch loading the bases for Ava. Henry singled scoring Bewley. George then hit a ground ball to 3rd base. Koop was out advancing to home. Jada Gunter walked scoring another runner, Devin Rowe, who was running for Miquia Heinlein. Evans then wrapped up the scoring in the 1st with a single allowing Henry to score and giving Ava a 4-0 lead.

Gracie Heinlein once again held an opponent hitless through 3 innings. By the time the Vikings scraped up a hit Ava was up by 16 and fully in control of the ball game.

The Lady Bears were able to knock out 12 hits 16 runs while only striking out once as five different Lady Bears stole bases. 10 walks given to the Lady Bears helped hasten the Viking’s demise. Gracie held the Vikings to just 2 hits and 1 earned run for the night while walking no one.

Ava will play next October 11th as they await the winner of the  Mansfield/Seymour game as the district tournament gets underway. The Lady Bears earned the #2 seed as the Willow Springs Bears sit at #1 awaiting the winner of the Hartville/Gainesville game. The district finals game will be held the next day, October 12th, with the winner moving on.