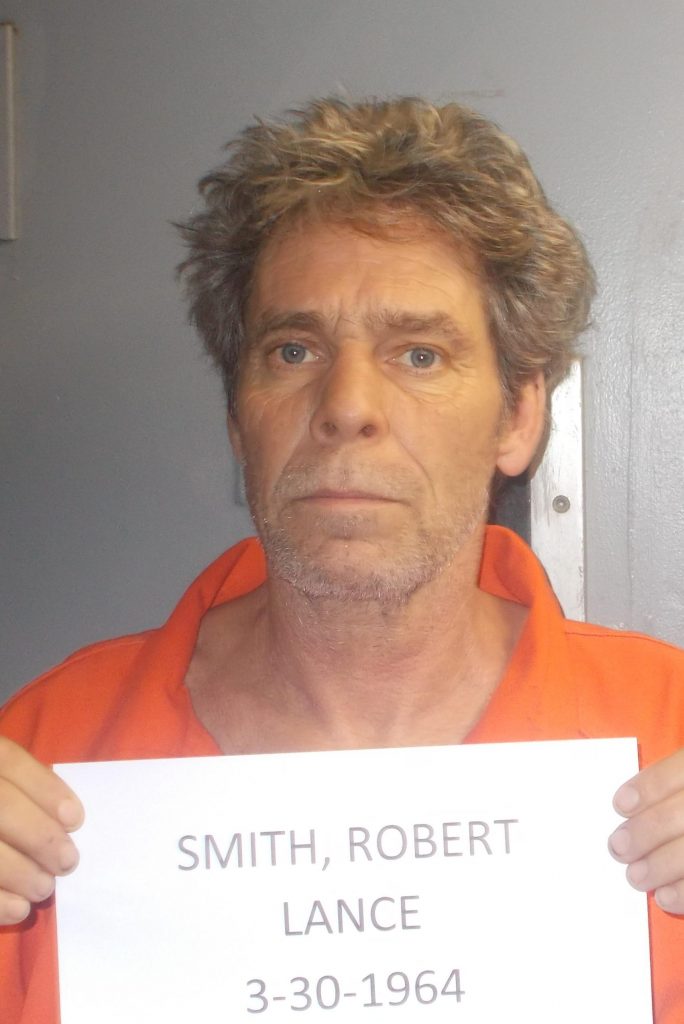 On Oct. 1, 2018, Vincent Mayo age 49, of Ava, was arrested from CPS on a Failure to Obey Judge’s Order and is currently serving a 10 day sentence.  On Oct. 4, a search warrant was served at Mayo’s residence, south of Ava, where several stolen items were recovered as well as methamphetamines, drug paraphernalia and two handguns.  Formal charges are pending from the search warrant.

On Oct. 4, 2018, Douglas County Sheriff’s Office received a call about a suspicious vehicle in the area of Arno on County Road 519, right off PP highway.  Upon arriving on scene, a female, who appeared to be disoriented and lost, was eventually detained after an illegal substance was located inside her vehicle.  Sharon Brown age 60, of Wasola, was arrested and charged with Trafficking Drugs Felony C with a bond of $20000  10% cash surety with CPS drug testing.  Brown has since posted bond. 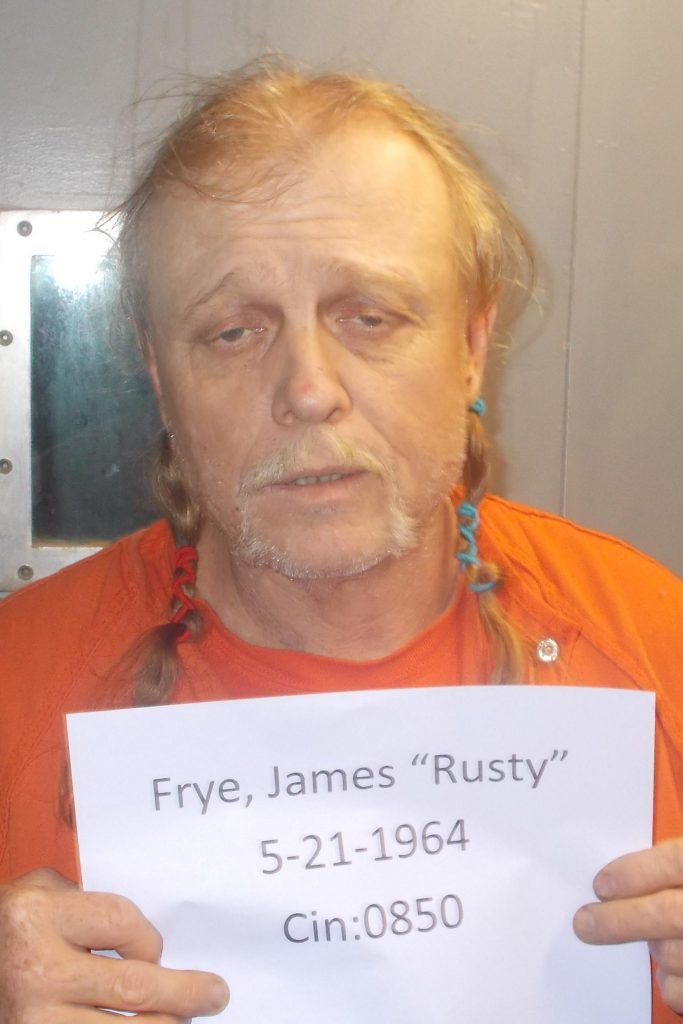 On October 4, 2018, Sheriff Degase made a traffic stop which resulted in James “Rusty” Frye age 55, of Squires, and Kimberly Kachiroubas age 33, of Ava, to be detained.  Frye who is on Probation for Possession from a 2016 incident, admitted to using methamphetamines and was sentenced to a 10 day shock in the Douglas County Jail.  Kachiroubas was arrested for Possession of a Controlled Substance with a bond of $10,000 10% cash or surety, which was the result of a traffic stop conducted by Deputy Harley in December of 2017.  Due to Kachiroubas having drugs on her during the time of the stop, another warrant was also issued for Possession, with a bond of $15,000 10 % cash surety. Both are currently still in the Douglas County Jail. 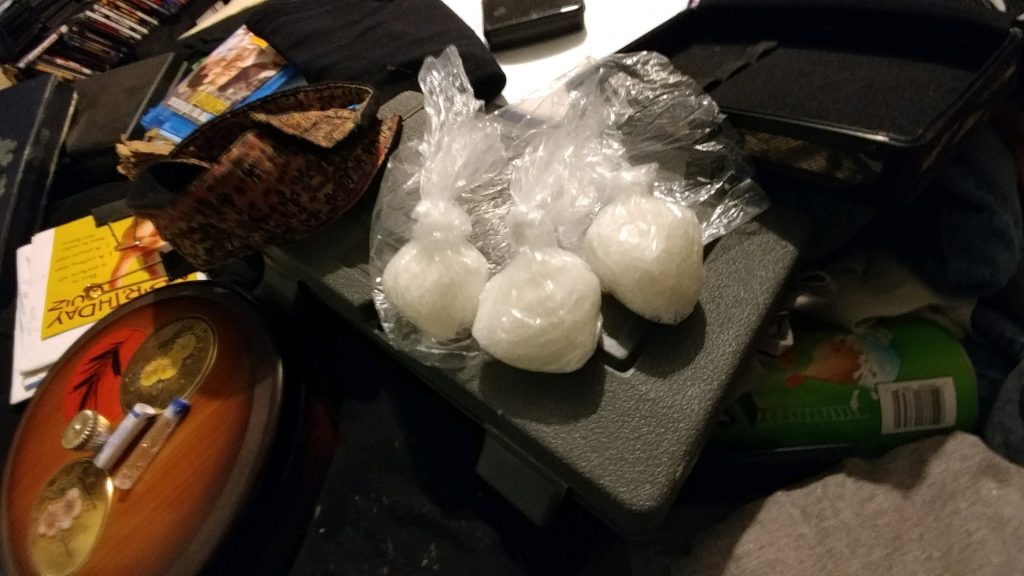 In the early morning hours on October 6, 2018, the Douglas County Sheriff’s Office served a search warrant in Wright County with the aid of the Wright County Sheriff’s Department, on information collected over a period of months.  Two individuals, Edward France and Amber Henry, were taken in to custody as well as approximately 80 grams of methamphetamines, 10 guns, as well as stolen items including a weed-eater and pole saw that were stolen from a burglary at Camp Joy in Douglas County. Douglas County Sheriff Chris Degase prepared the search warrant for the residence in Wright County after a lengthy drug investigation and burglary in Douglas County lead him to the Edward France residence in Wright County just north of Hartville. Both subjects face Delivery of a Controlled Substance Felony C, Possession of a Controlled Substance Felony D, Endangering the Welfare of a Child x2 Felony D, and Unlawful Use of a Weapon, Felony E.  Bond has been set at $25,000 cash only.

On October 6, 2018, the Douglas County Sheriff’s Office received a distressed call from a

homeowner on East 14.  The caller stated that she had just had an individual break into her home, heavily armed and was talking about a biker gang chasing him. The individual briefly took the phone from the victim and identified himself as Robert Smith of Reeds Spring, then fled from the home, firing shots as he took off behind the house.  When Sheriff Degase and Deputy Harley arrived at the residence and took position, shots were fired from behind their location and back up was immediately called.  Deputies from Ozark County as well as Missouri State Highway Patrol responded.  After entering into a heavily sloped wooded area and splitting up, Deputy Harley kept Smith distracted by yelling and talking long enough for Sheriff Degase to locate and detain him.  Upon detainment, Sheriff Degase and Deputy Harley were able to locate 4 guns Smith had placed in and around the area, most loaded and ready to use.  Smith continued to talk about individuals he claimed were in the woods with him and those at his house in Stone County.  A search warrant was served by the Stone County Sheriff’s Office where methamphetamine, marijuana and scales were located, as well as numerous holes in the walls from being shot with a gun.  Robert Lance Smith age 54, of Reeds Spring, has been charged with Burglary 1st Degree Felony B, Armed Criminal Action x 3, Unlawful Use of a Weapon and Property Damage.  Bond has been set at $50,000 Cash only and Smith is currently still in the Douglas County Jail. 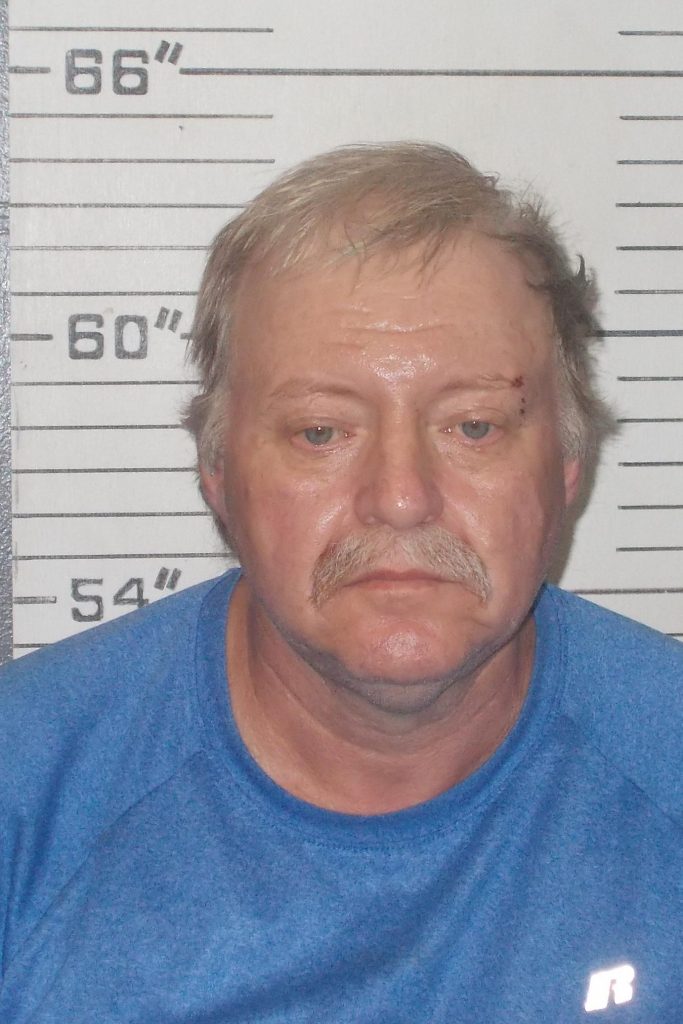 On October 6, 2018, Deputy Harley made a traffic stop on a vehicle on South 5 that resulted in a felony warrant arrest from Ozark County on Kevin “Red” Smith.  Smith had been on the run since a search warrant had been served on his property in July of 2018, where methamphetamines and a large amount of drugs were seized.  The search warrant was a result of an ongoing narcotics investigation conducted by the Douglas County Sheriff’s Office that carried over into Ozark County. Sheriff Degase prepared the search warrant for Smith’s residence from information he had received and the warrant was served by Douglas County Sheriffs Office and Ozark County Sheriffs Office.