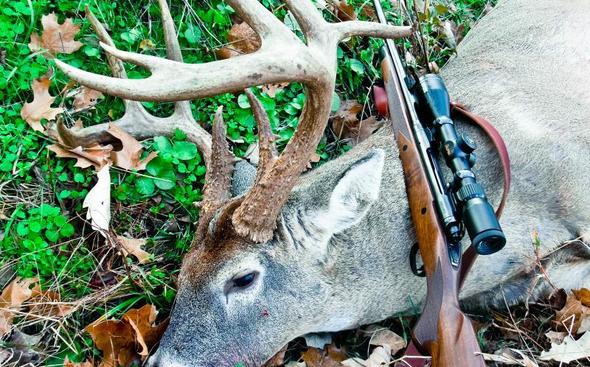 MDC reminds deer hunters that properly disposing of carcasses of harvested deer is important in limiting the spread of chronic wasting disease (CWD). MDC also reminds hunters who harvest deer, elk, or moose outside of Missouri and bring the animals back must follow related regulations to help limit the spread of CWD.

Properly dispose of carcasses and follow laws for deer harvested outside Missouri.

JEFFERSON CITY, Mo. –– The Missouri Department of Conservation (MDC) reminds deer hunters that properly disposing of carcasses of harvested deer is important in limiting the spread of chronic wasting disease (CWD). MDC also reminds hunters who harvest deer, elk, or moose outside of Missouri and bring the animals back to follow related regulations to help limit the spread of CWD.

CWD is a deadly illness for white-tailed deer and other members of the deer family, called cervids. CWD kills all deer and other cervids it infects. It has no vaccine or cure. CWD is spread from deer to deer through direct contact and through contact with soil, food, and water that have been contaminated through feces, urine, saliva – and carcasses — of infected deer. Learn more at mdc.mo.gov/cwd.

CWD has been found in Missouri and is slowly spreading. MDC needs the help of hunters to help limit its spread.

Carcasses or carcass remains of CWD-infected deer can expose other deer to the disease. Long after infected carcass remains decompose, the soil around the remains can stay infectious, possibly exposing other deer.

Place in Trash or Landfill: The best way to prevent the spread of CWD is to place carcass remains in trash bags and dispose of them through trash collection or a permitted landfill.

Bury on Site: If you can’t bag and place in trash or a permitted landfill, bury carcass remains at or near where the deer was harvested. Bury deep enough to prevent access by scavengers. Burial will reduce but not eliminate the risks of spreading CWD.

Leave on Site: As a last resort, leave carcass remains onsite. While this will not prevent scavengers from scattering potentially infectious parts, the remains will stay on the general area where the deer was taken. If CWD is already present on that area, it will likely remain there and not be moved to another area.

Do Not Place in Water: It is illegal to dispose of carcasses or remains in streams, ponds, or other bodies of water.

Do Not Burn: Only commercial incinerators reaching over 1,800 degrees Fahrenheit can generate enough heat for long enough to destroy the prions that cause CWD.

Follow laws for harvested deer and other cervids brought into MO

Hunters who harvest deer, elk, or moose outside of the state and bring the animals back must report the entry into Missouri within 24 hours by calling 877-853-5665, or reporting it online at mdc.mo.gov/carcass. The carcass must be taken to a licensed meat processor or taxidermist within 72 hours of entry.

Hunters just passing through Missouri on their way to another state are exempt from this requirement as long as they are not in Missouri for longer than 24 hours.

The reporting requirement is only for whole carcasses and carcasses that have the head and spinal column attached. Parts that do not require reporting and that are at lower risk for harboring CWD include:

-meat that is cut and wrapped; boned-out-meat;

-quarters or other portions of meat with no parts of the spine or head attached;

-hides or capes from which excess tissue has been removed;

-antlers, including those attached to skull plates; and

-skulls where all muscle and brain tissue has been removed.