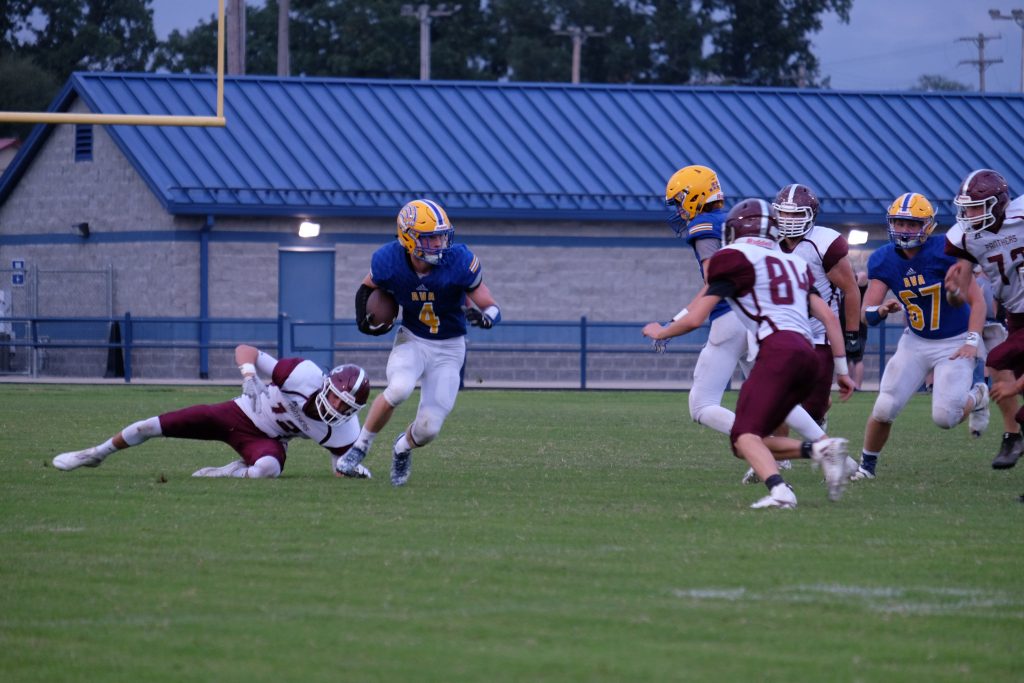 Player X breaks a tackles as he rushes for a gain early in game Friday night against the Mtn. Grove Panthers

An evening that very well could have been a soaker, turned into a beautiful night for Ava Bear football. SCA conference play started this week for the Ava Bears as, well as many in the area. But the one we are most focused on tonight is, “good vs. evil”! Will good prevail?

Ava kicked off to start the first quarter of play. The defense of the Bears look small, compared to the offensive line of the Panthers. Despite losing Josh Bray to an injury, at Hallsville, last Friday night, and moving people into different positions, Ava’s defense was able to shut down the Mtn.Grove Panthers, in their first two possessions in the first quarter.

The Panthers’ defense was able to keep Caleb Johnson and his quick offense out of the end zone, as well. With the first two possessions of the ball, stopped for both teams, it looked like it was going to be another week of, whoever had the best defense, was going to win this football game.

Ava, with the ball late in the first quarter, eager to get the first points on the board, scored on a 62 yard run. Caleb Johnson faked the pitch, dodged a couple Panthers, and got the Bears on the board first, with 1:12 left to go in the 1st quarter.

The point after attempt was no good, putting the Ava Bears up 6 to 0 over the Mtn. Grove Panthers.

The Panthers, with the ball back, trying to run on Waylon Moon and Ethan Pederson, proved it’s not going to work, as they kept good containment. Ava held the Panthers early in the 2nd quarter, to get the ball back, after Zach Mendel nearly intercepts the football.

Caleb Johnson got the ball back across mid-field, with an excellent punt return.

Steven Copeland, appearing to be healthy, had his lightning speed back this week, got the Ava bears all the way down to the 18 yard line.

Nate Swofford, quickly getting to the sideline, appears he’s going in for the touchdown, but gets pushed out of bounds, just shy of the goal line.

Caleb Johnson’s next play gives it to the big and powerful Kayden Myers, who crossed the goal line. A penalty flag is thrown and pushed the Bears back to the 7 yard line, but Steven Copeland seals the deal, getting the ball into the end zone, completing a 34 yard drive, at the 8:48 mark of the 2nd quarter. Caleb Johnson tried a quarter back keeper on the two point conversion and failed, giving the Bears a 12-0 lead over the Panthers, in the 2nd quarter.

Ava’s defense is doing a number on the Panthers, as the second quarter continued, only giving up 2 first downs. The Bears stop the scoreless Panthers once again, as they are forced to punt. The Panthers get an exceptional punt off, leaving Ava deep in their own territory.

The Bears offense, not showing the energy to answer back, after the Panthers touchdown, end the first half of play leading 12-6

Ava, with the ball back starting the second half of the game, appear to have found another gear, as they recollected themselves at halftime.

Caleb Johnson’s pass to Kayden Myers, early in the third quarter, appeared to be a touchdown, as he broke loose from the field, with no one close to stop him, but he was tripped up, by his own feet, and fell short at the 20 yard line. The Bears aren’t able to complete the drive to get more points on the board, as the big defense of the Panthers shut them down.

Ava’s defense is working hard, but Grove is able to put the ball in the air, to get them in good scoring position. Then a big run by Grove, after missed tackles, gives them momentum.

Ava started to turn the momentum their direction, early in the fourth quarter, with a 4 yard touchdown run, by Caleb Johnson, getting the scoreboard tilted in their favor at the 11:12 mark, of the 4th quarter

Steven Copeland drives in the two point conversion, putting the Bears up on the Panthers 20-12.

With things finally clicking for Ava in the fourth quarter, they were able to stop the Panthers, as Caleb Miles showed his eagerness to keep the Panthers at bay and held them to four downs.

Ava took over, on the 48 yard line, and the first possession of play, Nate Swofford breaks a number of tackles, getting to the outside and puts much needed points on the board, for the Ava Bears, as he crosses into the end zone. Kayden Myers runs the ball in for the two point conversion, putting Ava up 28 to 12, over the Mtn. Grove Panthers.

The Bears are able to hold off the Panthers in the fourth quarter, giving them their first conference win of the season. Come out Friday night, as Ava hosts the Liberty Eagles, here at Silvey field.