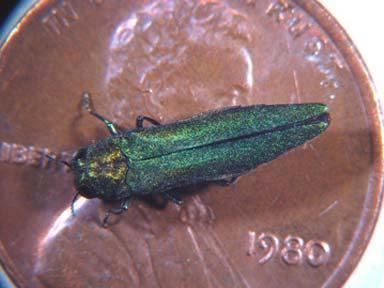 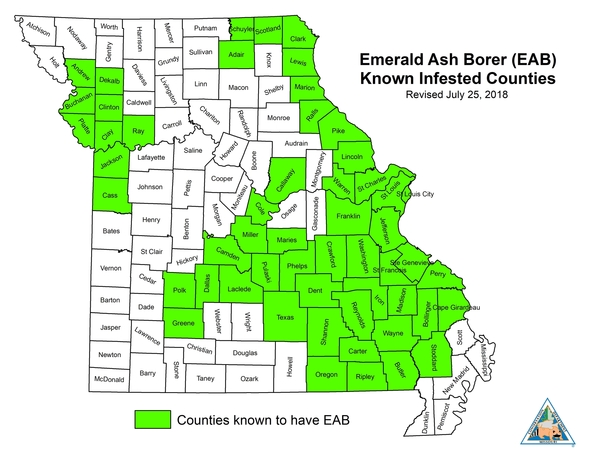 COLUMBIA, Mo. – Foresters with the Missouri Department of Conservation (MDC), in conjunction with the Missouri and U.S. departments of agriculture, have confirmed the presence of Emerald Ash Borer (EAB) in 11 new counties across Missouri. New detections have been confirmed in Adair, Callaway, Cape Girardeau, Cole, Greene, Jefferson, Lewis, Lincoln, Pike, Polk, and Warren counties. Since EAB was first detected in Missouri in July 2008, the exotic, tree-killing pest has spread to a total of 53 Missouri counties and the City of St. Louis.

EAB is a small, metallic green beetle native to Asia that only attacks ash trees. The adult beetle does very little damage. In its larval stage, however, EAB bores into the vascular layer of ash trees, creating distinct S-shaped galleries that slowly cut off the trees’ flow of water and nutrients and eventually cause the trees to die. Unfortunately, EAB kills more than 99 percent of the ash trees it attacks within 3-4 years of infestation.

MDC Forest Entomologist Robbie Doerhoff urges people who own ash trees in areas where EAB has been found to make a plan now to either treat or remove those trees.

“If you have a healthy, high-value ash tree in your yard, it can be treated with insecticides that will protect it from EAB. However, these treatments must be applied every year or two to guarantee protection,” said Doerhoff. “For some ash trees, especially those that have already lost more than 50 percent of their leaves and branches, the best option is removal, followed by replanting with a different species, such as an oak native to Missouri.”

Several insecticide treatment options are available, including some do-it-yourself methods. However, it’s important to note that insecticides available at home improvement stores work best on trees smaller than 20-inches in trunk diameter (measured 4.5-feet from the ground). Trees larger than 20-inches in trunk diameter require insecticides available only to licensed applicators in order to provide adequate protection from EAB.

“If you decide to treat your ash tree, make sure you use a pesticide labeled to kill EAB and that you apply it at the right time of year,” said Doerhoff. “Chemical treatments are most effective in early spring when a tree’s vascular system is better able to take up the insecticide. In late summer, and especially during drought conditions like we’re currently experiencing across most of Missouri, treatments may not work properly.”

Doerhoff advises that now is a good time to develop a plan, and if appropriate, contact a professional to get on a list for a spring treatment. For large trees that need to be treated by a professional, use a reputable company and get a couple of bids. Some neighborhoods receive discounts if several people have ash trees treated by the same company.

Ash trees that are removed should be disposed of locally to prevent the accidental spread of EAB to new locations. EAB can emerge from ash firewood and logs for up to two years after harvest, so don’t give EAB a free ride to your favorite camping locations.  Buy firewood near where you plan to burn it!

For more information on protecting your ash tree from EAB, download the Emerald Ash Borer Management Guide for Missouri Homeowners at short.mdc.mo.gov/ZSq.

MDC encourages Missourians to learn to identify signs of EAB and report possible infestations in counties where the pest has not yet been confirmed. For a map of EAB’s spread across Missouri and detailed information on identification, visit eab.missouri.edu. Report suspected EAB damage in new counties to a local MDC forester, call MDC’s Forest Pest Hotline at 866-716-9974, or email [email protected]