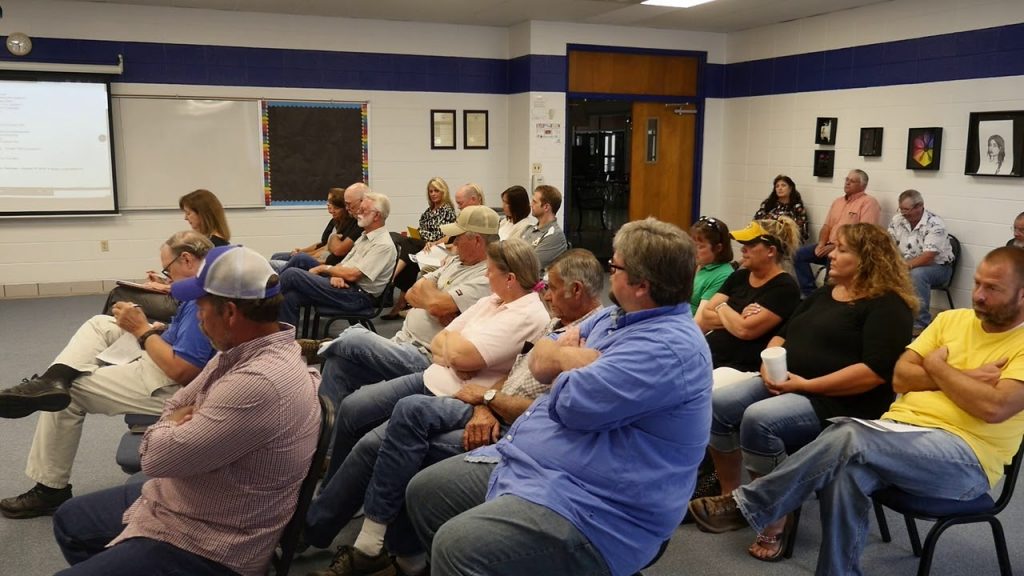 Meeting focus is once again devoted to student transportation and busing issues as the board continues to disagree about contract details.

Ava R-I School Board members continue to be at odds when it comes to assessing the pay scale for bus drivers and what amount, if any, is deemed fair for the contracted group to receive in compensation.  In the meeting last week on June 21, the board voted 4-3 against giving an increase to the contracted drivers for their services, whereas earlier in the meeting, the board rendered a 7-0 vote giving a 2.83% increase to non-certified staff and an $1,854 base pay increase to the salary career ladder for the teaching staff.

Board members voting against a pay adjustment for the contracted routes were Kenny Fleetwood, Mark Henry, Bart Ellison and Michael Stewart.

Those voting in favor were Troy Tredway, Lowell Strong and Deana Parsick.

In the discussion, Parsick commented “there is a belief that the bus drivers are making bank, but I know personally that is not the case, they are just getting by.  These bus drivers are taking responsibility and they deserve compensation.”

Tredway said he believed Ava’s transportation system is the best, and the board needs to quit making a big scene over every little thing.  “We just gave one of the biggest and best packages to everyone else at the school, but not the bus drivers.  Have you talked to Skyline, anyone?  Haven’t you noticed that other schools are struggling to find bus drivers…?”

However, there is also a fluctuating rate on gas allowances, and including those factors for this school year, total annual expenditures were $609,113.27.

According to research data provided by board member Troy Tredway, Ava R-I’s present student delivery transportation system ranks lower in cost when compared to other schools.  Tredway noted over the past two years Ava’s transportation costs have decreased, moving from a high of $722,828 in recent years to the current expense of $609,113.27 this year.   He noted Ava’s system is different than other districts, but Ava excels in safety and efficiency, and the current system has worked well for decades.

Tredway also advised of a recent conversation with Tim Ammon, Chief Business Development officer with TransPar, of Lee’s Summit, Mo., a company that evaluates and develops solutions to difficult operational questions in order to help school districts meet student transportation needs.  In an effort to gain research information, Tredway said he discussed Ava’s present system with Mr. Ammon, as well as inquired about their audit process for evaluating costs and efficiency of a busing system.  Ammon said he would need to evaluate Ava’s system before making conclusions, but based on their conversation, Ava’s system appears to be running efficiently.

Prior to making a motion to hire TransPar for the audit, Tredway said “there is a misconception on what we’ve got here, and yet we’ve got some members on the board that aren’t happy.  Doing this [the audit] would provide important information.” Nonetheless, the motion was voted down with only two board members, Troy Tredway and Deana Parsick, voting in favor.  It was then recommended Superintendent Dr. Jason Dial research companies for a possible evaluation audit, and bring that information to the board at a later date.

The pay options, as noted below, are recommendations given to the board as possible actions for enhancing the pay scale of the contracted bus routes.  The options were not openly discussed by board members with exception of option 4 which was recommended for board approval by Lowell Strong. The motion was voted down 4-3.

Voicing opposition to the idea of an increase, Michael Stewart said  “I can’t support that based on the last two years Missouri State Highway Patrol reports.”

The options follow below and are based upon base fuel reimbursement rates, with no increases for fuel:

According to Dial, the inspection included nine district buses and 26 contracted buses, for a total of 35 buses.  Eight district buses were approved, with one deemed defective.  Sixteen of the contracted buses were approved, with six found defective, and four placed out of service.  According to the standards, buses given a “defective” rating must be repaired within 10 days after the inspection, and re-inspected after repairs. Buses given an “out-of-service” rating must be repaired, re-inspected, and placed back into service by the Highway Patrol before transporting students. If buses are not presented for re-inspection within the 10-day period, they are reported to the Missouri Department of Elementary and Secondary Education.

Dial said a district inspection could be set up on a Saturday and possibly James Heath could be asked to help facilitate the event for bus drivers.

Strong made the motion to implement two bus inspection events per year, one in the spring and fall, and if bus owners do not attend, they will not receive monetary increases.  The motion passed 7-0.

In closed, the resignation of Emily Sterling, a first-grade teacher, was accepted.

Christy Albriton was hired as a para-educator in the elementary building.  Katrina Matney was approved for transfer from high school counseling office to the secretary/receptionist position in the administration office, and Deevala Miles was hired to fill the vacated position in the counselor’s office.

Cynthia Carnall was hired to fill a slot as high school special education teacher, and in the administration office, Shawna Cleavenhagen was hired as assistant bookkeeper.

During the meeting, board members also unanimously voted to approve the following: annual transfer of funds from fund one to fund four; annual correction of 2017-18 budget numbers; adoption of student handbooks with recommended changes; and authorization for the superintendent to pay July bills, as the board does not meet in July.

The next board meeting is scheduled for Thursday, August 16, with the tax rate hearing at 6:15 p.m.  The regular meeting will follow at 6:30 p.m.  Meetings are open to the public.