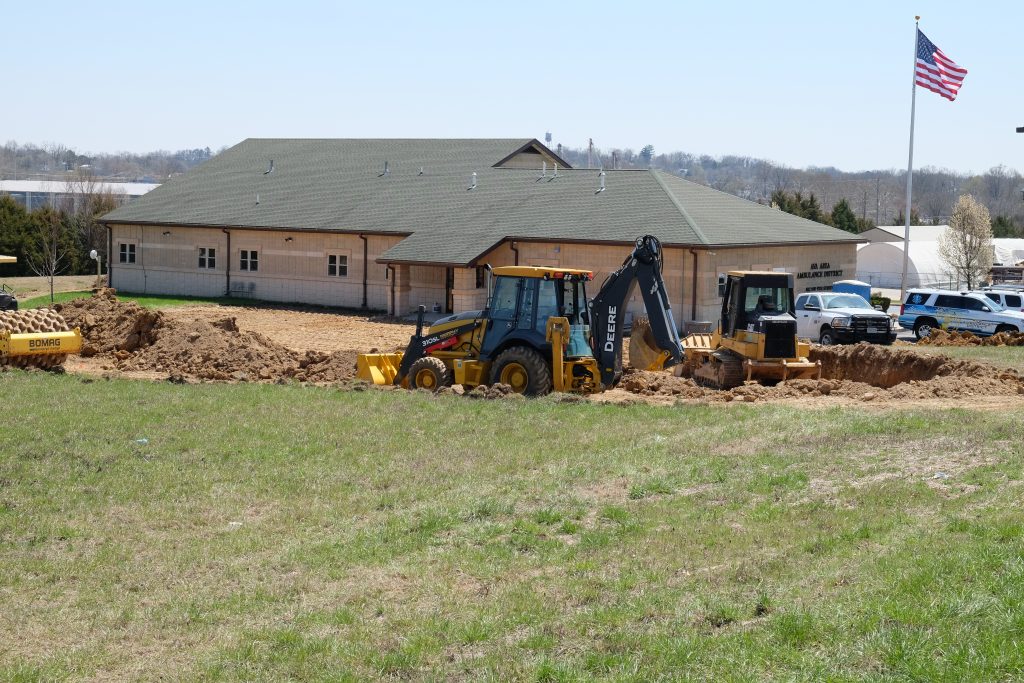 Submitted by Keith Moore
After months of bidding, rejecting bids, rebidding and negotiating contracts, the Ava Area Ambulance District began construction this week on an addition to the existing ambulance station at 1412 Prince Street in Ava.
The new building will consist of a large meeting room to be used for employee training as well as community classes in CPR and other related activities.
In addition to the 30-by-32-foot training room, the addition will include a new administration office area, an employee exercise area, and a storage vault. This 32×60-foot unit will be located to the north of the existing building and will be a separate building with connecting corridor.
With the number of ambulance calls answered by the Ava station increasing at a steady pace each year, the Ambulance Board decided to also add another ambulance bay to the east end of the existing garage section, and with that, another employee bedroom will be added.
The Ava Ambulance District contracts its ambulance services through Cox Health Systems, Springfield. Two advanced life support ambulances are on call 24-hours a day. If the call volume continues to increase as it has over the past several years, the district will be in a position to put a third fully-staffed ambulance in service as needed.
The new construction is designed by Steve Deckard of Keystone Architects, Marshfield. General contractor is Greg Crawford Construction, also of Marshfield.
Bales Construction, Springfield, was the original low bidder on the project at $881,000 but refused to present the district with a contract for construction after their bid was accepted.
That opened the door for the Ambulance Board to negotiate with Crawford for construction of the facility at a quoted cost of $904,000.
Last week the Ambulance Board received financing proposals from all five Ava banks and approved the plan submitted by Great Southern Bank.
Excavation began Monday and already construction plans have been altered due to the presence of rock. The storage vault that was to have been a basement room will now be built above ground. The cost difference is not yet known, but Greg Crawford said keeping it above ground will certainly cost less when considering the cost of removing the rock.
The new facility should be completed by early fall.