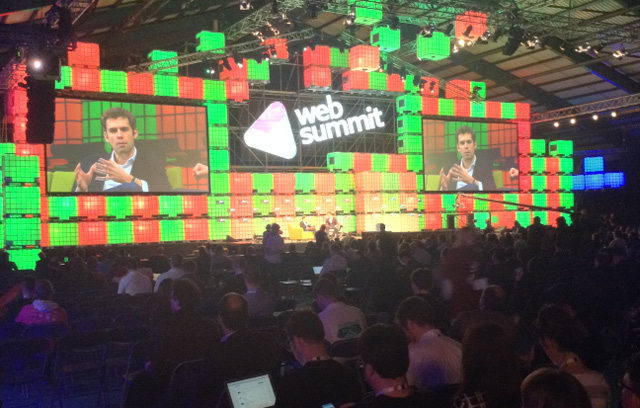 A view from the audience at the Web Summmit Centre Stage

Technology conference Web Summit was held in Dublin from 4th to 6th November, an impressively huge and very well organized tech event, where around 20,000 attendees from more than 100 countries met. During three intense days, we found gathered a great amount of insightful speakers sharing their ideas, enthusiastic startups willing to met investors, as well as countless workshops, roundtables, network sessions, presentation pitches, demos, stands, and also night parties. Actually, the event featured several summits happening at the same time: Builders, Enterprise, Food, Machine, Marketing, Music, Sport, amongst others.
From Hollywood to the real world
In the morning, one of the first speakers that impressed us was the interface designer John Underkoffler, pretty widely known for his work as science advisor on SF films like “Iron Man” and “Minority Report”. This MIT Media Lab alumni gave us a visionary glimpse of where human-machine interaction is heading. It looks like definitely you can forget your mouse, keyboard and other devices as 3D space UI is becoming the emerging trend. Oblong Industries, the company where Underkoffler serves as a CEO, has been working since more than a decade to make real the cool gesture-based data interface technology featured in the film “Minority Report”, and they are almost  there with G-Speak, an spacial operating environment, whose first commercial application is the conference room solution Mezzanine.

A hardware 2.0 company
Min-Liang Tan from high-performance gaming hardware company Razer explained why today developing hardware is once again so exciting. Hardware 2.0 companies like Razer, Beats and Oculus are blurring the boundaries between hardware and software, focusing instead on the user experience. In the case of Tan’s company, on top of that “bits and atoms” deep integration, a layer of user behavior big data is the key to design better gaming user experiences. As Tan put it, “huge amounts of data makes better products”. Having started as a gaming peripherals manufacturer, this Singapore-born entrepreneur is bringing his company to become a whole gaming platform for a global user base of superfans.

Your body is the platform
Stephen Lake and Aaron Grant from Canadian startup Thalmic Labs made an enjoyable presentation reviewing the evolution of user interfaces. Starting from the early beginnings of interfaces, and going through Douglas Engelbart, the first MacIntosh and the iPhone, to the wearable technology of today. What we can expect for the near future is, according to them, a new generation of interfaces that will blur the lines between humans and computers. In that sense, this promising gesture control and wearable technology company introduced us the MYO armband, a futuristic wearable device allowing seamless interaction with a broad range of technologies (computer, phone, and other gadgets) by reading muscle electrical activity directly.

Smart Dublin
Rob Kitchin, professor and researcher at the National University of Ireland Maynooth presented the Dublin Dashboard, a new site providing real-time information, open data, and interactive maps and graphs about many aspects of the city. The goal of this project, funded by European Research Council and Science Foundation Ireland, is to improve the habitability and attractiveness of Dublin by using innovative information and communications technology. However, distancing himself from technological solutionist approaches, Kitchin said that “technology is not the only answer”, underlining some objections to smart cities, as they can lead us to a technocratic and corporatized governance, reinforcing power imbalances and inequalities.

Robocars, the future of driving
Internet pioneer and entrepreneur Brad Templeton captivated the audience sketching the future of automated transportation. Amusing, but at the same time challenging, he really shined on stage, exposing the benefits that self-driving cars (or Robocars, as he calls them) will bring to society, such as the reduction of the number of accidents (human drivers kill 1,2 million people each year worldwide, most of the accidents caused by drunkenness or inattention), or savings in the energy budget and C02 emissions. With car manufacturers like Audi and Tesla getting ready to launch their first commercial models within two o three years, we should better take self-driving cars as a coming reality. According to Templeton, they could become popular by around 2020. Here, the slides of Templeton’s Robocars talk.

Templeton’s career is astonishingly multifaceted. Just to mention a couple of his past achievements, let’s recall that he was founder of ClariNet, one of the companies that can claim having been the first “dot.com”, and Chairman at the digital civil liberties defender Electronic Frontier Foundation. He is currently chair of computing & networks at Singularity University, software design advisor for BitTorrent, and advisor to Google’s team developing self-driving cars. We had the opportunity to speak with him on his career and future challenges. We will post the interview soon.

The long tail of making
Since its foundation in 2007, 3D printing company Shapeways is aimed to make 3D printing accessible for everyone. During his enthusiastic talk, Peter Weijmarshausen, CEO and co-founder of Shapeways, showed us the expanding possibilities of 3D printing, currently being possible to design and print, for instance, custom phone cases, model trains, jewellery, board games, etc. As he put it, “only your imagination is your limit”.

Shapeways provides services and tools to the members of its community to create and print their own objects, even for those without prior knowledge on 3D technologies. On the other hand, Shapeways is also a marketplace where makers and designers can get profit by selling their own designs.

Weijmarshausen also talked about the recent partnership agreement with Hasbro, Inc, to produce 3D printed models of characters of My Little Pony. That could open a path to further agreements with other licensed media companies as both, companies and their fans, benefit. It helps fans, because they can choose and decide about their most beloved licensed products; and it benefits companies as well, saving huge amounts of money in marketing and testing campaigns. Though “we still need something like Spotify for 3D printing”, he finished assuring that “in years to come, we are going to see the profound impact of these technologies”.

Legos for the iPad Generation
Since we witnessed their astonishing presentation at Sónar + Barcelona last June, we truly believe that the electronics manufacturer littleBits is one of the most innovative players of the Maker movement. littleBits is an open source library of modular electronics pre-assembled in small circuit boards that snap together with magnets. They empower makers and designers, allowing them to play and experiment with electronics even without being an expert. Education through electronics is also an important concern of littleBits as they provide a specific kit for educators and students.

At Web Summit, Canadian Ayah Bdeir, CEO and founder of the company, shared with us her fresh and visionary ideas on open hardware and maker movement. In that sense, a main aim of littleBits is to provide people with means for them to make things. Advocating for a democratization of hardware and engineering, she presented her company as an alternative to top-down and closed approaches of traditional hardware companies. Hardware needs iterations, it needs to be imperfect, she said. In that development scenario, the involvement of the community is decisive. She also proposed democratizing the Internet of Things by lowering the barriers to understanding and iterating, making it universal and raising the ceiling of complexity. As a result, we could make the Internet a modular block.

She closed her presentation saying that the next billion dollar idea is not going to come from Apple. It is going to come from designers, artists, entrepreneurs and everyday people.
Smart little things
After that, Ayah Bdeir joined to Zach Supalla of Spark and Moe Tanabian of Samsung to discuss the challenges raised by the exponential growth of the Internet of Things. The panel called “Connecting the dots” was moderated by Mischa Dohler from Kings College London.

All panelists agreed that there is still a long way to make the Internet of Things a land of opportunities. In that sense, Moe Tanabian, Head of Smart Things Innovations Lab at Samsung, said that “we are still in the early 90’s”, comparing the current trends in technology to connect IoT devices with the way computers were connected in that early stage of the Internet. He also addressed the privacy issue, sustaining that privacy is important but at this moment is overhyped, further considering that the value of the service overpasses the privacy issue.

“The world is waking up to the Internet of Things”, said Zach Supalla, CEO of open source and Internet-connected hardware Spark . Nevertheless, even when developing IoT hardware is getting easier, it is not that easy yet. During a hardware development process, it is necessary to overcome many barriers (or “reefs” as he said) before reaching a steady position to benefit from the fact that hardware is harder to copy than software. On the other hand, Ayah Bdeir of littleBits said that making a prototype is still difficult, as components dictate what a prototype can do. She also underlined the interest of her company in using electronics as a material.

In conclusion, Web Summit was a vast, humongous event: from pop stars to tech visionaries, everybody exposed their ideas and points of view about where new tech developments are driving us.

This annual Dublin event has something to offer to everybody, no matter which your interests are: for sure you will find someone with an enlightening idea or a brand spanking new project glad to tell you about it. Ultimately, as usually happens, the best of this kind of event is the rousing people you met there, the real driving force of our future. 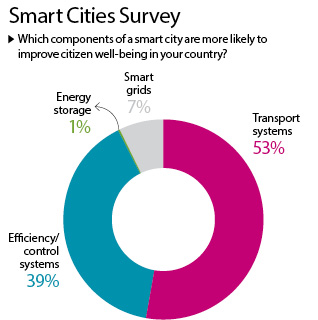 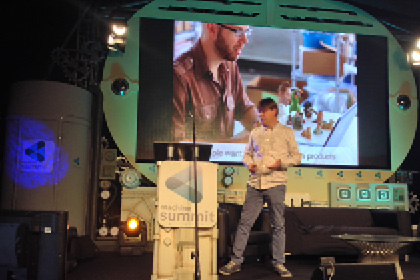