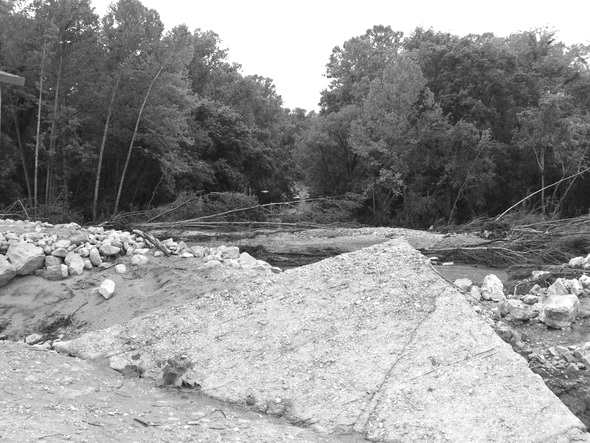 Progress being made in re-opening flood-damaged accesses, but work still remains
WEST PLAINS, Mo. – Missouri Department of Conservation (MDC) staff wants to remind fall floaters and anglers to check on the status of MDC river accesses before heading out on a canoe trip or an evening of gigging.
More than 184 MDC accesses and conservation areas were damaged in historic spring flooding. MDC staff has been working to prioritize repairs across southern Missouri. Currently, only four river accesses remain closed due to extensive flood damage.
One of the accesses still not open is the Jerome Access in Phelps County. This site remains closed while MDC discusses future options for this popular Gasconade River access that has been in the bull’s eye of several recent flooding events. Most recently, the site was the victim of flooding in April. The damage report included an entrance road washed out by a deep scour hole, a parking lot surface washed away entirely, a privy’s concrete apron flipped over and moved by floodwater, a boat ramp buried under deposited gravel, and multiple scour holes at the site.
Though the cause of this particular damage was a weather event the National Center for Environmental Information termed a “once in a millennium rainfall,” Jerome Access’ flood troubles have been much more frequent. There have been multiple closings of the site due to flooding in the past decade, the most notable being in 2013 and 2015 when the site was shut down for extended periods while significant damage was repaired.
While Jerome Access is closed, the nearest MDC accesses on the Gasconade are Bell Chute Access in Maries County near Vienna and Riddle Bridge Access in Pulaski County near St. Robert.
Accesses currently closed for repairs due to flood damage:
• Paydown Access on the Gasconade River (Maries County)
• Warren Bridge Access on the North Fork of the White River (Ozark County)
• Cook (Flo) Access on Bryant Creek (Ozark County)
• Mrytle Access (Oregon County) on Eleven Point River (only boat ramp is closed)
• Mitschele Access on the Gasconade River in Pulaski County is also closed, but this closure is due to construction on Missouri Highway 7, not flood damage.
People wanting information on other MDC accesses and fishing opportunities in the area can call the MDC Ozark Regional Office in West Plains (417-255-9561) or visit https://huntfish.mdc.mo.gov/fishing. For updates on area closures, visit MDC’s “Places to Go” feature at https://mdc.mo.gov. Search for a specific area or areas using the appropriate search fields. Next, click on the area name listed under the map to get any closure information.
Posted in City of Ava