| logout
Ava senior Quincey McDonald ran for two touchdowns and caught a pass for a 2-point conversion at Mtn. View last Friday night to help the Ava Bears in a 35-14 win over the Liberty Eagles.
The win boosts the Bears to 4-0 on the season while Liberty falls to a surprising 0-4 start of the 2017 football season.
Ava got on the scoreboard first when Joe Balassone picked up a blocked punt and returned it 25 yards to score with 9:18 left in the first quarter.
The Eagles had received the opening kickoff and picked up one first down at their own 44-yard line. Loss yardage had the Eagles in a fourth-and-15 at the 38, and the snap from center was low and mishandled by the Eagles allowing Balassone to pick up the loose ball and return it for the score.
Caleb Johnson’s kick was no good and the Bears led 6-0.
Liberty tied the game, then took the lead at 3:12 in the first period on a 4-yard pass from Koel Orchard to Andrew Holden. Holden also booted the point-after to put the Eagles up 7-6 at the end of quarter one.
A holding penalty that went against the Eagles and a couple of strong defensive plays by the Bears had the Eagles in a fourth-and-35 predicament that warranted a punt from midfield. The Bears began the next series at the 20-yard line, and on the first play from scrimmage, McDonald found a hole and sprinted the field, going 80 yards to score. Johnson passed to McDonald for the 2-point conversion to make up for the missed kick earlier, and the Bears had a 14-7 lead with 8:27 left in the first half.
The Bears would go up 21-7 before the half ended when quarterback Johnson kept on the option and scored from seven yards out with just under a minute on the clock. Johnson also kicked the extra point.
Liberty went to their passing game on the Eagles’ first possession of the third quarter, alternating Orchard and sophomore Jaris Acklin at the quarterback position. With 5:38 on the third quarter clock, Orchard scored on a 4-yard run from the quarterback position, and Holden kicked the extra point to trim the Ava lead to 21-14.
The fourth quarter began with Ava in a third-and-one at the Liberty 7-yard line. McDonald converted a first-and-goal a the 4, then scored from there with 11:37 left, and Johnson’s kick made it 28-14.
Once again the Eagles moved the ball up the field, picking up first downs a the Liberty 45 and the Ava 43, but came up just short on fourth-and-3, turning the ball over on downs at the 33-yard line.
McDonald, Johnson and Stephen Copeland took turns carrying the ball, advancing into Eagles territory and running minutes off the game clock. The Bears were in a fourth-and-8 situation at the Eagles’ 12-yard line when Copeland broke away an scored with 3 minutes on the clock and Johnson’s kick solidified the final score of 35-14.
McDonald had 17 carries for 175 yards and two touchdowns, and caught a pass for a 2-point conversion.
Copeland carried 11 times for 65 yards an and touchdown, and Johnson ran for a touchdown and passed for a conversion, and kicked three extra points.
Bailey Bewley led the Ava defense with 13 tackles, three for loss. Sophomore Aeneas Stout had 12 tackles, two for loss yardage. Another sophomore, Josh Bray, had 11 tackles and the blocked punt that Balassone ran back for a score.
Ava rushed for 292 yards on the night and passed for 62, for total offense of 354 yards.
This week the Bears are back home to face the big and physical Salem Tigers in what will also be Homecoming at Ava High School.
The Tigers, which will come here with a 2-2 record, have a big front line. The Tigers have returned to a wishbone offense this year, and typical of Salem football, they will just line up and come at you, and make you stop them, according to Ava coach Dan Swofford.
Posted in School News, Sports 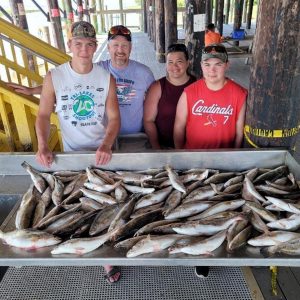