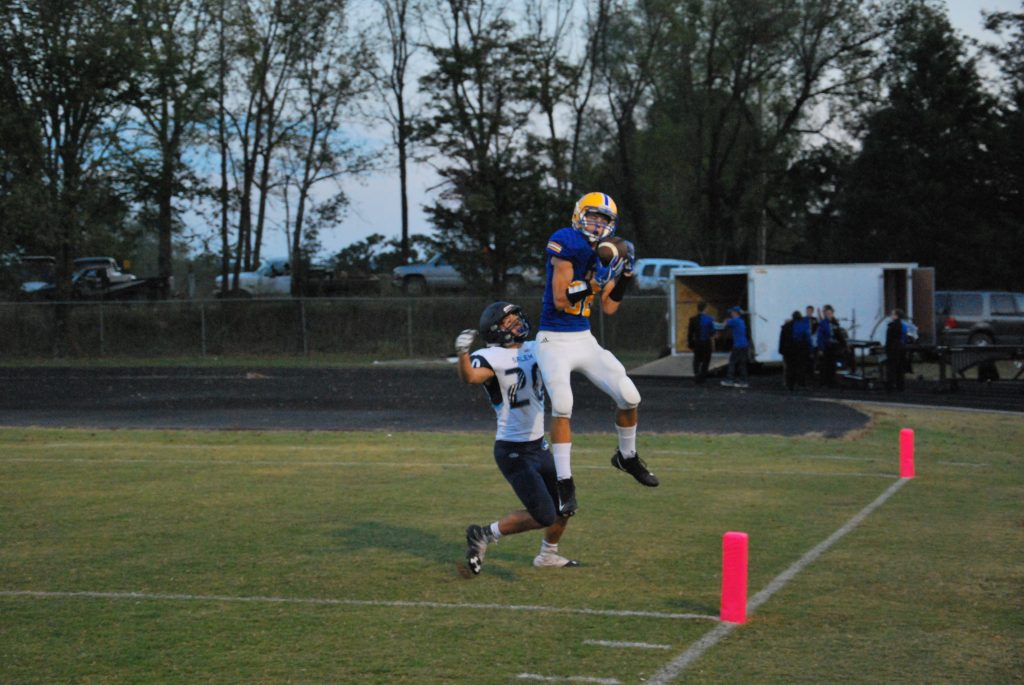 Senior Michael Lane makes a leaping catch and manages to stay in bounds for Ava’s first score on the night last week against Salem. Ava defeated the Tigers 45-0 in SCA action.

The Ava Bears brought Homecoming Week to a sweet climax last Friday night, defeating the Salem Tigers 45-0 in Friday night football.
The shutout victory boosts the Bears to 5-0 at the halfway mark of the regular season.
This week the Bears will travel to Houston which won its first game of the season over Cabool, 31-15, on Sept. 8. 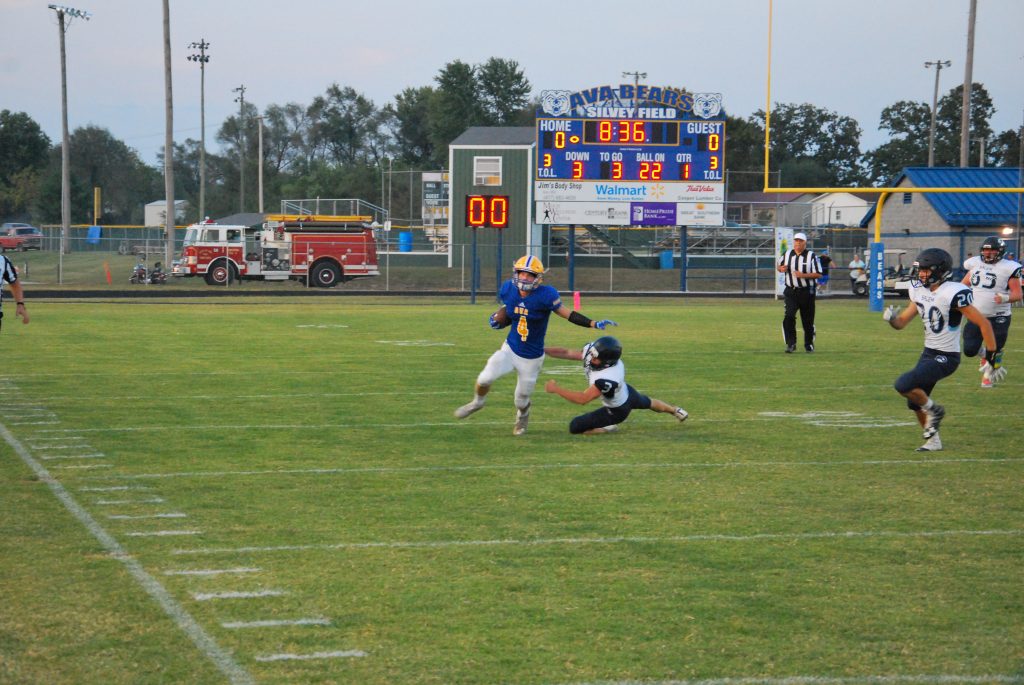 Stephen Copeland ran for touchdowns of 51 and 54 yards last Friday night and was Ava’s leading rusher with 191 yards on eight carries.
Quarterback Caleb Johnson passed for three touchdowns – all to Michael Lane – and was 3-for-4 kicking for extra points.
Ava had 348 yards rushing and 118 passing for total offense of 466 yards.
Ava began the scoring at 3:23 in the first quarter when Johnson passed to Lane for a 27-yard touchdown reception. The 2-point conversion attempt failed.
On the first play of the second quarter Johnson found Lane once again for a 12-yard touchdown reception and once again the 2-point conversion attempt failed and the Bears’ lead was 12-0.
Ava’s second score followed a 17-yard completion from Johnson to senior Joey Swofford.
The Bears scored again at 5:46 in the second period on a 51-yard sprint to the end zone by Copeland. For the third time, the Bears attempted a 2-point conversion and for the third time Salem stopped the run.
The Bears went up 25-0 before halftime when Johnson passed to Lane once again for a 20-yard touchdown reception. Johnson kicked the extra point following Ava’s fourth touchdown of the half which came with 5 seconds on the first-half clock.
That Ava score was set up by an interception by sophomore Aeneas Stout that stopped a potential Salem scoring drive.
The Tigers had picked up two first downs on the drive before the interception with 30 seconds on the clock.
Ava’s first possession of the game ended in a fumble to the Tigers, then the Bears scored on their next four straight possessions of the first half.
Ava’s first drive of the second half went 50 yards and climaxed with a touchdown run by sophomore Kayden Myers. Johnson’s kick made it 32-0.
Ava’s only punt of the night came inside 6 minutes in the third quarter. But the next time the home team got the ball Copeland once again outran the Salem defense for a 54-yard touchdown at 3:36. Johnson’s kick put the Bears up 39-0 and began the running clock for a rapidly-expired fourth quarter.
With the starters on the sideline, Ava continued to move the ball against the downcast Tigers, and with 7:29 showing on the game clock, Myers ran 11 yards for Ava’s final score, making it 45-0. The point-after kick was no good.
Myers intercepted a Salem pass on the Tigers’ next possession, then a few minutes later broke out of the Ava backfield for another touchdown that was called back for an Ava penalty.
As time ticked off the clock, sophomore quarterback Nate Swofford took a knee and let time expire.
Ava’s defense held Salem to just four first downs, all coming in the first half.
Stout had 13 tackles for the Bears, including two for loss yardage, and an interception.
Myers had 10 tackles, one for loss, and an interception, and Bailey Bewley had 11 tackles on the night, including five for loss yardage.