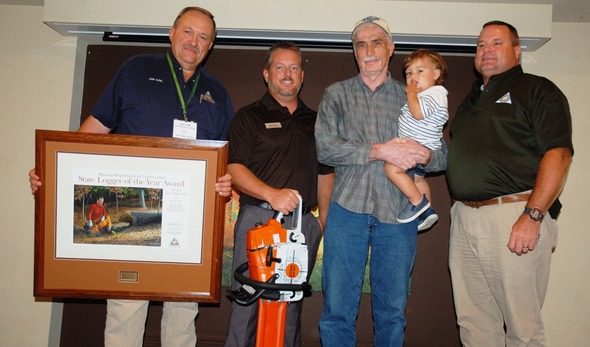 PIEDMONT, Mo. – The Missouri Department of Conservation (MDC) congratulates Eric L’Heureux of Piedmont on being named Missouri’s State Logger of the Year for 2017. L’Heureux was also named regional logger of the year for the Southeast Region.
L’Heureux was nominated by MDC Resource Forester Shane Botard, who says L’Heureux’s work represents some of the best quality logging jobs he has witnessed.
“Eric is professional-timber-harvester-trained and always does a good job protecting land and water resources on a logging site,” said Botard. “I’ve seen him harvest timber on several private land sales and he’s done a great job for the landowners.”
L’Heureux has worked several jobs as a timber cutter for Coblentz Sawmill in Grandin. Botard has observed L’Heureux’s work for Coblentz and is impressed with his ability.
“One sale had some very large mature trees to harvest, which can be difficult due to the damage they can cause when they fall,” said Botard. “Eric did a very good job keeping damage to a minimum, making sure the landowner’s woods will continue to thrive.”
MDC Forest Products Program Supervisor Mike Morris added, “Eric represents exactly what we want from Missouri’s professional loggers. He takes care to protect the natural resources and recognizes the value of proper training and safety.”
In recognition of his award, L’Heureux received a framed certificate from MDC at the Missouri Forest Products Association summer meeting, along with a STIHL chainsaw donated by longtime partner Crader Distributing of Marble Hill.
The Missouri Department of Conservation partners with Crader Distributing to give annual awards to loggers who have demonstrated outstanding performance and good working relationships with landowners and foresters. The loggers are recognized for minimizing damage to trees and natural resources and using best management techniques that preserve Missouri’s forested lands for generations to come. For more information, visit mdc.mo.gov/about-us/awards-and-honors/logger-year-award.