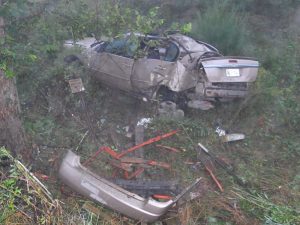 This late-model Chevrolet was demolished in a crash on West Highway 14 in 2017 but the driver was apparently not seriously injured and left the scene before emergency responders arrived.

Emergency medical and rescue personnel were dispatched just after 6 a.m. Monday for a one-vehicle crash on Highway 14 west of Ava near the bottom of Dogwood Hill.
Cox Ambulance-Ava and Ava Rural Fire Dept. personnel arrived on scene to find the Chevrolet car demolished, but the driver had left the scene and was apparently not hurt.
The Missouri State Highway Patrol also reported that a wreck last Tuesday resulted in only minor injuries.
Shelly M. Fitzcharles, 24, of Seymour, suffered minor injuries in a one-vehicle crash west of Ava on Tuesday, Aug. 8.
The Highway Patrol said Fitzcharles was a passenger in a 2005 Kia Spectra driven by Eric R Bliss, 24, of Gainesville. The wreck occurred at 7:35 p.m., six miles west of Ava on Highway 76.
The westbound car went out of control, traveled off the left side of the roadway, hitting a fence, a pole and a roadsign.
Both the driver and the passenger were wearing seatbelts, according to the Troop G accident report filed by Tpr. J.O. Prater assisted by Tpr. C.J. Mendez.