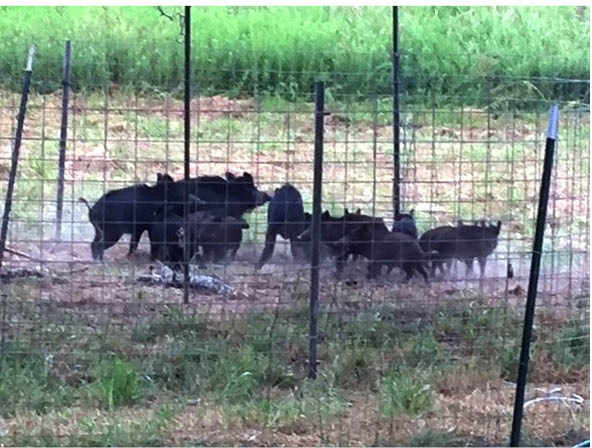 JEFFERSON CITY – When Ken Hobbs bought his 362 acres in Reynolds County, it was pristine and he planned to farm cattle and goats on the land. Then feral hogs moved in. Feral hogs are an aggressive invasive species. Their violent nature, rooting habits, and known diseases pose a threat to wildlife, farm crops, and the balance of nature.
“I had planned until this problem got so big to have cattle and goats in here,” Hobbs said. “I’d be afraid to put cattle out there because there’s no way I’m going to have a herd of cattle out there without broken legs, it’s not going to happen.”
The feral hogs didn’t only dash Hobb’s hopes of farming his land, they’ve also significantly decreased the numbers of wildlife that once thrived on the property.
“My turkey population went from one that I could actually go out and see every day, 15 to 20 of them in a flock, and in three to four different places on my property. Now those no longer exist,” he said.
Hobbs first began to try to control the feral hogs by shooting them and enlisting the help of his friends to trap small numbers of them at a time.
“We’ve been trying to control the hogs for several years with our own small traps and hunting,” Hobbs said. “But over the past two or three years, the problem has become so severe that there’s no way to control them personally by hunting.”
Now, on any given night, more than 30 feral hogs will congregate in Hobbs’ front yard, leaving scat every foot or so and rooting up his once flat, lush yard into continuous divots. His fields are in even worse shape.
“These spots get rooted eight-to-10 inches, quite often though it’s 12, 16, sometimes 18-inches deep,” he said.
Those damaged fields, the dashed hopes of farming, and the general destruction Hobbs has endured on his property are why he and other landowners reached out the Missouri Department of Conservation (MDC) to help. MDC, United States Department of Agriculture and other partner agencies are working with private landowners to teach them how to trap whole sounders of feral hogs at a time, which is more effective than shooting the feral hogs.
Dean Bridger is an Iron County landowner about 20 miles away from Hobbs. Bridger also understands that it’s just not possible to control feral hogs by hunting.
“I get a lot of people up and down the highway that say they want to shoot hogs and I say I’ve got 30 of them. I don’t want one shot, I want them all shot because shooting one doesn’t help me at all,” Bridger said. “They say they’ll come out every night but you can’t do that. The hogs are fast. Once they get scared, they’re gone to the four winds so you might be able to shoot one at a time.”
But trapping isn’t the only strategy that must be used against feral hogs.
“We have to look at this from a bigger picture, it can’t just be one landowner doing this it has to be everybody,” Bridger said. “We have to pull together, get them [hogs] all together and get them trapped.”
Mark McClain, a wildlife management biologist with MDC, is working hard to trap hogs and to pull people together on the effort. McLain leads feral hog elimination efforts in southeast Missouri. He spends a lot of his time with landowners like Hobbs and Bridger, outlining plans to trap the feral hogs on their property. This cooperation between landowners and conservation groups is the key to success in feral hog elimination.
“With the new innovations in traps and with more landowners on board, all of us getting together and working at it, we can saturate that landscape with effort and come up with better traps, better baits and better ways of doing things,” McLain said.
So far in 2017, MDC and partners have removed 4,128 feral hogs from Missouri, which is a great increase from previous years. This is nearly double the progress that was made at the same time in 2016. Increased efforts and better technology continue to show success each year and McLain says MDC and its partners will continue improving until their goal is met.
“As an agency with our partners, our goal is complete elimination of feral hogs from Missouri,” McLain said.
For more information about feral hogs and how to help with elimination efforts, go to www.mdc.mo.gov/feralhogs.