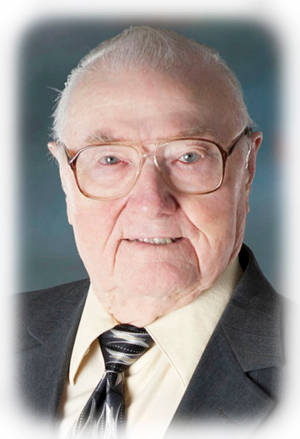 Kenneth H. Heard, 93, a resident of The Fountains in Bettendorf, died Saturday, July 29, 2017 at Clarissa C. Cook Hospice House in Bettendorf.
Funeral services were held at 10:30 a.m. on Thursday, Aug. 3, 2017 at McGinnis-Chambers Funeral Home in Bettendorf. Burial was at Davenport Memorial Park. Visitation was from 5 – 7 p.m. on Wednesday, Aug. 2 at the funeral home. Memorials may be made to Clarissa C. Cook Hospice House.
Born on April 26, 1924 in Garden Grove, Calif., Kenneth was the son of Henry Clay and Amanda (Page) Heard. On April 11, 1948 in Douglas County, Mo., he married Esther J. Freeman. She preceded him in death on May 14, 1997. On Nov. 7, 1998 in Ava, Mo., he married Christine Page. She preceded him in death on June 22, 2013.
Kenneth served in the United States Army from 1943 – 1945, stationed in the South Pacific. He finished his high school education upon his honorable discharge from the Army. Kenneth worked as an inspector in IPS for Alcoa for 33 years, retiring in 1986. He also drove a bus for Pleasant Valley Schools.
Kenneth was a devoted Christian. He was a long-time member of the Valley General Baptist church where he served as a deacon, taught Sunday school, and worked as a youth leader. Kenneth enjoyed gardening and woodworking. He loved to play spinner dominos and visit with many friends at the Fountains. He had a life-long devotion to his faith and family.
Survivors include his children, Mike (Deede) Heard of LeClaire, Iowa, Bryan (Jean) Heard of Davenport, Lietta (Glen) Riexinger of Scranton, Pa., and Gail (Danny) Gatton of Bettendorf; 12 grandchildren and 14 great-grandchildren; siblings, Leonard (Theta) Heard of Tulsa, Okla. and Shirley (Coday) Draper of Springfield, Mo.; as well as step daughters, Sue (David) Pitts, Janice (David) Meier, and Kay; along with numerous grandchildren.
In addition to his wives, Kenneth was preceded in death by his parents and two brothers, Robert and Arnold.
Condolences may be made to Kenneth’s family by viewing his obituary at www.mcginnis-chambers.com.