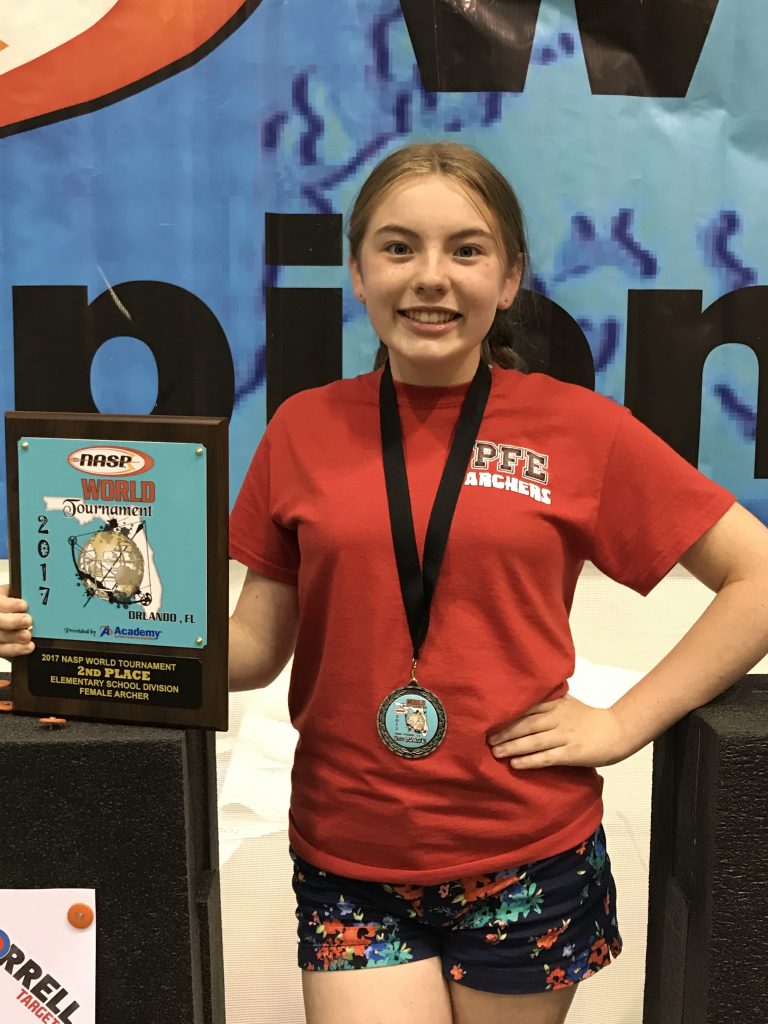 Bailey Mason, of Maumelle, Ark., placed second in the World Archery Championship in Orlando, Fla. Bailey is the granddaughter of Bill and Sue Downs of Ava.

Maumelle, Ark., has a champion archer in the making. You know — the bow and arrow kind. Students are not allowed to use just any type of bow or add on sights or make any modifications in order to help them better hit the targets successfully. All students must use a standard Genesis Original compound bow with no modifications. The maximum score possible is 300 with each of 30 arrows being worth a maximum of 10 points. Fifteen arrows are shot from 10 meters and the other 15 are shot from 15 meters. Bailey Mason is a fifth grader at Pine Forest Elementary and qualified for the NASP (National Archery in the Schools) National Tournament after scoring a 268 in the NASP Arkansas State Competition which was held in Hot Springs, Ark. Bailey finished 2nd in the state and qualified individually to go to Nationals. At the National competition in Louisville, Ky., Bailey scored a 287 out of 300. Her score was just one point away from first but by competition rules she placed fourth overall. First and 2nd places tied with identical scores of 288 and she tied 3rd place at 287. Because she scored in the top five she was invited to be a part of the National Academic All American Archery Team (24 students out of 15,000+ students were chosen) and go to Orlando, Fla., to compete in the NASP World Archery Championship. At the end of the competion, Bailey placed 2nd in the World Competition with a score of 285 out of 300. Bailey, 11, is the daughter of Sandra Downs Mason of Maumelle, Ark., previously from Ava. Bailey is the granddaughter of Bill and Sue Downs of Ava.