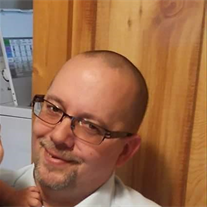 A celebration of life for Emil “Paul” Hagberg, Jr., 46 of Ava, Mo., (formerly of Gainesville, Mo.) was held on Saturday, June 17, 2017. Mr. Hagberg passed away at Mercy Hospital on June 15, 2017 in Springfield, Mo. Mr. Hagberg was born Jan. 28, 1971 in Wisconsin, the son of Emil and Patty Hagberg. Paul married his sweetheart, Kim, and they have been married for 28 years. Paul was very passionate about his family. He loved to hunt, fish, and spend any time he could outdoors, but most of all he loved his wife, children, and grandchildren. He had a wish of saving lives. With his passing he was able to help many others by being an organ donor. Survivors include wife, Kimberly; two daughters, Sarah Treat and husband, Levi, and Amanda Treat and husband, Shane, all of Watford City, N.D.; one son, Aj Hagberg and wife, Ashley, of Ava, Mo.; seven grandchildren, Emma, Landon, Walyn, Lauryn, Willie, Jaxsyn, and Corbyn; and many close friends that held a special place in his heart. He was preceded in death by his father, Emil Hagberg, Sr.