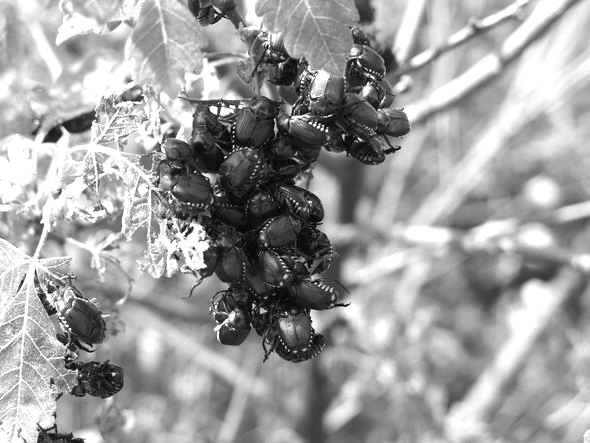 Japanese beetles eating leaves. These insects are leaf “skeletonizers,” feeding on the upper surface of leaves and leaving behind a lacy network of leaf veins.

The two pests look similar to one another, but are easy to tell apart.

JEFFERSON CITY – The Japanese beetle and the Emerald Ash Borer (EAB) are two invasive insects that are wreaking havoc on Missouri’s plants and trees. To the untrained eye, these two pests may look similar to one another. However, there are a few easy ways to figure out which green pest is plaguing your yard. “It’s easy to tell these two beetle species apart, even though both are metallic green in color and about a half-inch long,” said MDC Forest Entomologist Robbie Doerhoff. “EAB is slender and bullet shaped, while Japanese beetles are much wider and have copper-colored wing covers.” Japanese Beetle Japanese beetles were first discovered in North America in 1916, likely imported from Asia in potted plants. Japanese beetles can now be found through much of Missouri, with high populations in some areas. Japanese beetles are leaf “skeletonizers,” feeding on the upper surface of leaves and leaving behind a lacy network of leaf veins. They can feed upon more than 300 different types of plants and are frequently seen on grape vines, rose bushes, and elm, linden, sassafras, and fruit trees.  In Missouri, these pests are usually present in June and July. “Japanese beetles can defoliate an entire tree in just a few days. Good tree care, such as proper mulching and watering during dry spells, becomes very important in helping reduce stress to damaged trees,” said Doerhoff. For light infestations of Japanese beetles on shrubs and small trees, Doerhoff recommends hand-picking beetles and putting them in soapy water. While several insecticides are available to control these pests, caution is in order. “If you decide to use insecticides, select a product labeled for Japanese beetles and the plant type you want to protect. To avoid killing beneficial insects such as bees and butterflies, don’t apply insecticides to blooming plants,” she said. Learn more about the Japanese beetle on MDC’s website at http://on.mo.gov/2uiFcr3. Get treatment information at http://on.mo.gov/2tpI9ZI.

Emerald Ash Borer Like Japanese beetles, EAB is native to Asia. This invasive tree pest was first found in Missouri in 2008 at a campground near Lake Wappapello. Since then, EAB has been found in 37 counties throughout the state. Firewood movement is one way this pest has been able to establish in new locations so quickly. Doerhoff added EAB is much different than the Japanese beetle. “EAB only feeds on ash trees, and this species doesn’t congregate in large masses like Japanese beetles,” she said. “It can be difficult to actually see an EAB, even in areas where the population is high, because they will be feeding and mating in a tree’s canopy.” EAB only attacks ash trees. The adult beetle does very little damage. It is the larval stage that causes tree death. EAB larvae bore into the vascular layer of ash trees, creating distinct S-shaped galleries that slowly cut off the flow of water and nutrients. Unfortunately, EAB kills over 99% of the ash trees it attacks within 3-4 years of infestation. The best way to prevent EAB from attacking an ash tree is by treating it with a systemic insecticide. The size of the ash tree and its current state of health are important considerations when deciding on a treatment plan. “If you decide to treat your ash tree, make sure you use a pesticide labeled to kill EAB and that you apply it at the right time of year,” said Doerhoff. “Trees over 20 inches in trunk diameter need to be treated by a licensed applicator, such as a certified arborist.” For more information on protecting your ash tree from EAB, download the Emerald Ash Borer Management Guide for Missouri Homeowners at short.mdc.mo.gov/ZkT. 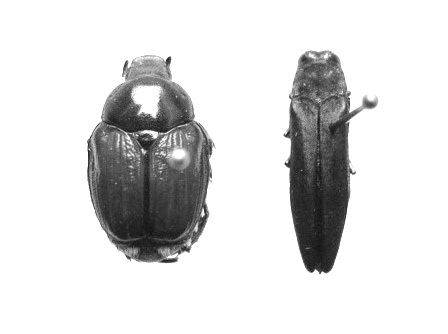 To the untrained eye the Japanese beetle (left) and EAB (right) may look similar to one another. However, there are a few easy ways to figure out which green pest is plaguing your yard. Look for the shape, color, and type of insect activity. 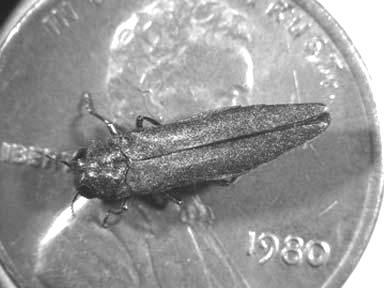 EAB compared to a penny. Both EAB (shown above) and the Japanese beetle are half inch in length.