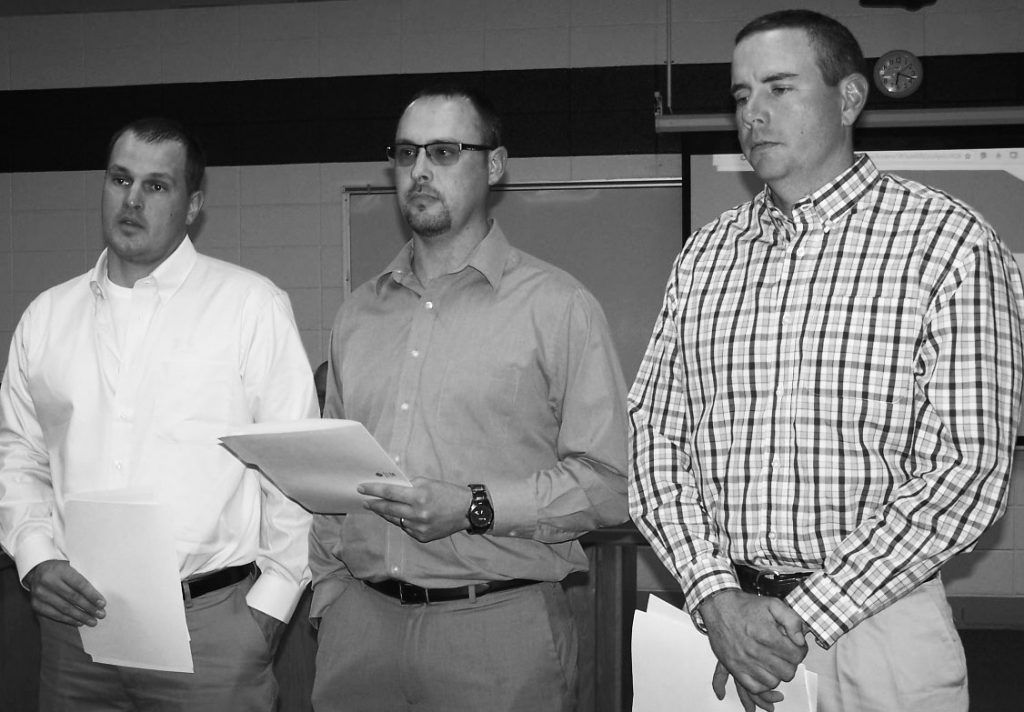 The Ava R-I Board of Education reorganized Thursday, April 20, with three newly-elected board members taking positions on the board panel.  In the municipal election held on Tuesday, April 4, candidates Mark Henry, Michael Stewart and Kenny Fleetwood were selected by voters to serve on the board.

As part of the reorganization meeting, and prior to swearing-in new candidates, the remaining four board members voted to accept the election tally as certified by Karry Davis, Douglas County Clerk.

Upon new members being sworn-in, the board voted a new slate of officers selecting Bart Ellison to serve as president; Vernon Johnson, vice-president; and Mark Henry, who ran a successful write-in campaign, secretary.  Monica Ray, an employee of the district, was reinstated as board treasurer.

With three new faces on the board, the board panel is now comprised of Troy Tredway, Kenny Fleetwood, Mark Henry, Bart Ellison, Vernon Johnson, Lowell Strong and Michael Stewart.  Student representative, Dwight Emerson, was absent from the session.

At the beginning of the business meeting, Superintendent Dr. Jason Dial expressed a note of appreciation and sincere thanks to past board members Marsha Aborn and Randy Spurlock for their commitment and dedication to the district, staff and students. He acknowledged Aborn’s service spanned from 2011 to 2017, and Spurlock’s from 2008 to 2017.  Spurlock also led as board president for several terms.

During closed session, the board accepted several resignations, two retirement notices, and filled five teaching positions for the 2017-18 school year.

Five positions filled for the fall term are:

Morgan Towell was hired as 6th-grade math teacher.  Towell is an Ava graduate who is currently completing student teaching in Mountain Grove;

Riley Jenkins will take on duties as assistant to middle school football;

Melissa Dalton, coach of the cross country team, will also serve as head coach of the high school girls track team; and

As in previous board meetings, Superintendent Dr. Jason Dial gave a review of state funding and an updated analysis of Ava’s proposed figures for next year’s budget.

Dial said few changes have occurred since his last funding report in February, as projections and figures from the State of Missouri continue to show that it “looks like $6,160 will be the state adequacy target (SAT), and Ava’s budget will be built on this number.”

State adequacy target represents the State of Missouri’s tuition factor for educating a student, each year, and that value is a part of the funding formula.  The projected figure for next year is $6,160, a slight increase from this year’s $6,110.

The state funding formula is a calculation multiplying the weighted average daily attendance, the state adequacy target, and the dollar value modifier which represents the cost of living in this school district.  Tax monies received from the local base are then subtracted from the equation and this sets the bottom line for funding.  Dial has assessed Ava’s funding next year will contain an additional $138,000.

Dial said closely following Ava’s numbers is a way of keeping funding on task and verifying district funds are being paid as designated.  He said it is also a way to monitor whether Ava is “bumping up” or “drawing down” on the funding scale and charting this movement provides an estimated but fairly accurate view of budget projections.

As part of the financial report, Dial advised that Senate Bill 313, the charter expansion bill, has a section that expands the school transfer law and travel hardships for public school students. The transportation hardship amendment proposes that if a student lives 15 miles from school, but lives five miles closer to another school, they can transfer to the closer school and the prior district must forward the student’s tuition to the selected school. Dial noted if this bill passes, it will have an impact on the district. At present, Ava’s tuition is $6,160 per student.

In a unanimous vote, the board authorized Dr. Dial to pay $2,000 to the Greater Ozarks Cooperating School Districts (GOCSD), a 38-school coop that is in the process of developing an extensive program of virtual courses, for digital learners.

According to Dial, the program initiative is well underway, and it is being developed as “Missouri’s solution to online learning.”  The program, called Launch, is also a grass roots effort to retain monies in the state of Missouri, as many out-of-state companies are vying for the virtual classroom business.

Dial said Missouri pays for classroom instruction whether it is virtual or seated, and this new venue keeps tax dollars from leaving the state.  Any student can participate in the program, even those who do not attend Ava schools, such as home schooled students.   Courses will be updated and reviewed every school year, and the online educators will be southwest Missouri teachers.

Dial said the $2,000 payment is a one-time contribution to bolster the start of the program.  Initially, class costs will be paid by the district, with a $300 fee for a ½-credit course, and $600 for a full credit class, and in turn, as students enroll, the district will receive the Average Daily Attendance (ADA) credit for every student participating.  The ADA total is defined as the total days of student attendance divided by the total days of instruction, and this number value is very important to state funding.

The GOCSD represents a total of 98,000 students, with a large segment attending Springfield schools.  The group was formed several years ago to support public school systems via lobbying efforts, and provide cost-effective professional development opportunities for teaching staffs.

In a 7-0 vote, the board agreed to purchase a Dodge Caravan vehicle from Corwin Dodge Ram of Springfield, Mo.  Bids were solicited from Corwin, Tri-Lakes Motor Sales in Branson, Davis Auto of Ava, and Lebanon and Marshfield.

The accepted bid from Corwin was for a 2016 white Caravan with low mileage, and a cost of $21,900.  The board opted for a newer model van; they also requested the extended warranty option.

Dial said the school’s 2014 white suburban was totaled, and a check for $4,300 would be forthcoming from the insurance company.  He noted a replacement vehicle was necessary as small groups of students occasionally travel outside the district, and taking a bus is not an economical option.

According to the presentation, Summit Learning offers different modalities for student use and the classroom environment –– including, small groups, focused activities, and individual tutoring, online. The system helps students develop skills by promoting teamwork, goal setting practices, and options for realizing their own individual path to learning.

The board approved the program with a 7-0 vote.

Unanimous votes were also given to the State and Federal Assurance policy on spending guidelines, and recent policy changes recommended by the Missouri School Board Association.  Dr. Dial said the district already complied with many of the policy updates, citing student record retention, A+ program, high school graduation requirements that now include CPR instruction, the Every Student Succeeds Act (ESSA) and House Bill 1432, which changes state administrative leave requirements.

Unanimous votes gave approval to the annual review of the guidance counseling program as presented by counselors Cara Roberts, Katie Burkdoll and Brooke Melton; and, renewal of the depository agreement with First Home.

With a recommendation from Dr. Dial, the board voted to participate in TIPS USA, a service cooperative that offers a vetting process for assessing reliable vendors and overseeing bids on major purchases and/or jobs.  The service is free.

Diana Premer, director of Bears Den, reported the Ava R-I is applying for a School Aged Child Care Grant.  The grant is a federal program, and if awarded to Ava, $60,000 would be conferred to the afterschool program.  Premer said Bears Den will continue to provide afterschool assistance next year, using the same format presently in use.  She noted Bears Den con-tinues to have strong student atten-dance, and the minimal tuition fees charged for the program are helping to keep the program up and running.

The district spotlight honored A+ students assisting middle schoolers and helping them complete learning assignments.  Recognition was given to Ava students Paden Coonce, Cage Kirkland, and Anthony Rosas, who was unavailable. There are 54 seniors participating in the program.

Both groups received a certificate of appreciation from the board.

The Ava R-I School District committee assignments are as follows:

The board will reconvene on Thursday, May 18, at 6:30 p.m. in the Board of Education room.  Sessions are open to the public.