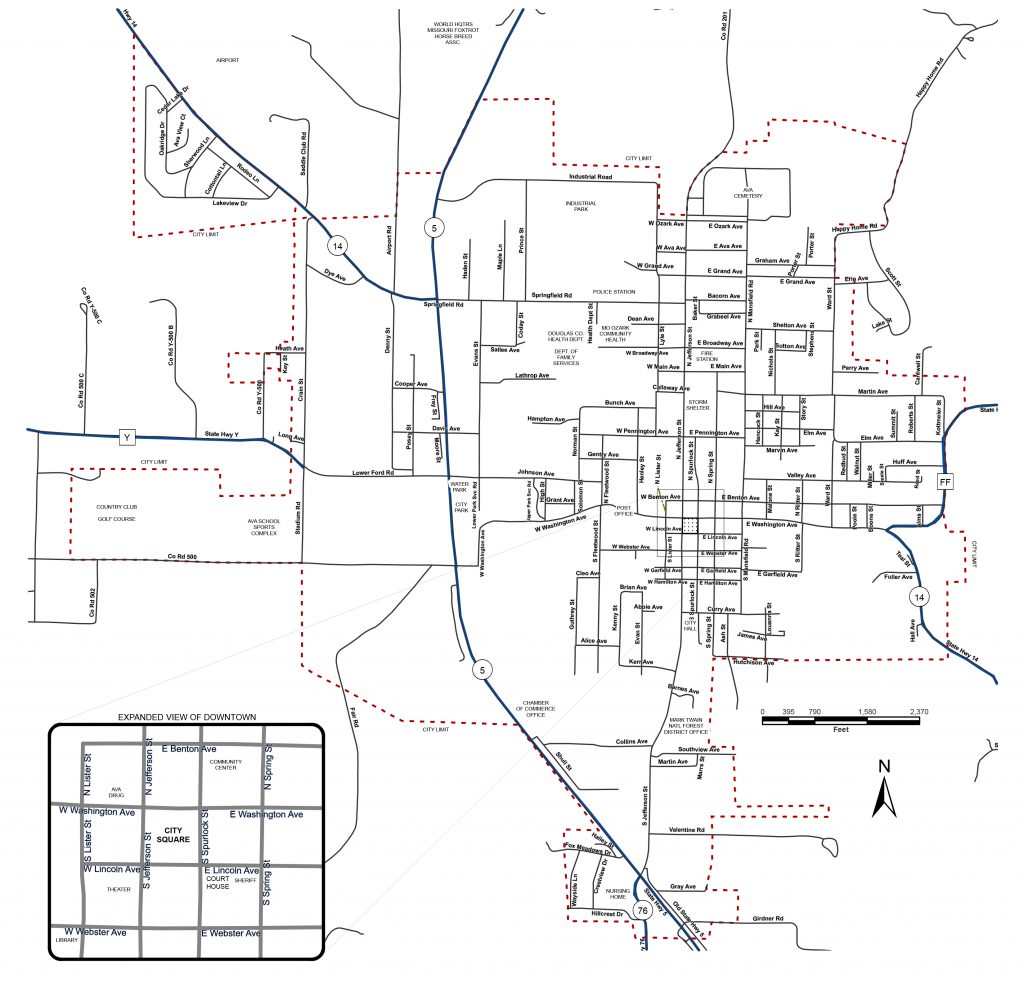 By Sue Curry Jones
Five ordinances were unanimously passed by Ava Board of Aldermen on Tuesday, March 28, with two of the five granting authorization for Mayor David Norman to contract work for the municipal airport improvement project.
For the project, Ordinance 1015 allowed the Mayor to sign a contract with Pace Construction LLC, the lowest bidder, for the construction of a new airport runway and pavement maintenance. Ordinance 1016 gave the Mayor permission to enter into a state aviation trust agreement with H.W. Lochner, Inc. who will serve as consultant on the project. Lochner specializes in airport planning, and architect and engineering design.
Ninety percent of the cost of the airport project will be paid through the State Aviation Trust fund grant. Under the agreement, the project has a total cost of $986,647, with Ava’s responsibility 10%, or $98,665.
To-date the city has paid $5212 toward the cost of the project and has a remaining balance of $93,452.
Norman said the city will pay for the project with funds from the street paving budget. It was mentioned that the airport is considered part of the city’s transportation component.
Council also passed an ordinance to modify the electric rate structure, an agenda item discussed during the prior council session. For most residential customers, the change does not mean a rate increase, but will simplify the current electric rate structure so cost factors better align with expenses, and the rate process is easier to explain and understand.
The change implements a fixed monthly charge of $22 per month for residential customers, with a usage rate of $0.0945 per kWh. Monthly charges for commercial customers will be $25 per month, plus a $0.1009 per kWh usage rate, and industrial demand customers will incur a base charge of $50, plus a rate of $0.0785 per kWh.
This rate restructure is being put into service per recommendations by Barnes Henry Meisenheimer Gende (BHMG), an electrical contractor firm in Arnold, Mo. According to BHMG, the new rate structure is comparable to electric cooperative rates and easier to understand. It also eliminates the layered billing format.
In other actions, council voted to approve Ordinance 1013 which extends user charges for water use and service, two additional years, as the present rate system expires in 2017. According to city officials, implementing the extension allows the water rate schedule and the sewer rate schedule to function on the same timeline and remain in force until 2019. The water and sewer rates may then be reevaluated in 2019.
In unanimous votes by council, in two readings, aldermen adopted the proposed plan to change number designations on certain streets and avenues, to streets with names. According Mayor Norman, most of the streets selected for new names have been plotted on a map, and the project is nearing completion. He advised that contact was made this week with Kelli Stafford, postmaster of the Ava Post Office, and Stafford has agreed to work with the city and implement the address changes this spring. Norman said maps with the changes will be delivered to the post office later this week. A copy of the map showing new street names will also appear on the Douglas County Herald website as soon as the info is made available.
Norman, who will now order new signs, commented that changes will be implemented in the northeast section of town first, with the south-east section to follow.
It was noted some city signs were already slated for repair and replace-ment because they do not meet new reflective standards. Nonetheless, the total cost of the project is estimated to fall within a range of $6,000 to $7,000.
Council selected a new sign for the Ava Police Department by giving the job to the lowest bidder, Payne Sign Company, in Springfield, Mo. Four companies were contacted for bids, and three responded, with Legacy Sign Company and Missouri Neon also submitting bids.
Payne’s proposal is for an elevated post sign with dual faces, and LED lighting. The other two bids proposed monument styles with LED lighting, but both proposals were much higher with quotes of $4,990 and $5,506.62, respectively. In the discussion, councilmen opted for the pole design, as it was more likely to be easily viewed by passing traffic. Whereas, the monument signs, which sit closer to the ground, could be obscured by vehicles sitting in the parking area.
Motions to select the Payne bid were by aldermen Keith Jones and Stan Lovan. The vote was 4-0.
Mayor Norman said he recently talked to Presiding Commissioner Lance Stillings to learn the county’s request for the recycling grant was denied. Norman said he recommends establishing a four-person panel to oversee recycling, as the old board, which is still in operation, refuses to help and have anything to do with the present operation.
City Clerk Suzanne Welsh noted the City will host another electric and hazardous waste pickup on April 20, from 3 p.m. to 6:30 p.m. Welsh also said the City Wide Cleanup is scheduled for the first week in May. Both events will be advertised in the Douglas County Herald and the local radio station, as more information will be forthcoming.
Norman reported Verizon is still reviewing options for placing an antenna and transmission equipment on the water tower site located at the corner of SE 4th Avenue and SE 8th Street, in town. He also advised the sidewalk construction project is now completed except for a few minor details which are the responsibility of the contractor.
The Municipal Court Docket dated March 17, 2017 was approved as presented. The vote was 4-0.
A closed session meeting was held, however, no voting action was taken. According to City Clerk Suzanne Welsh, discussions focused on personnel issues and litigation.
City officials and councilmen will reconvene on Tuesday, April 11 for the next session of city business. The meetings begin at 5:00 p.m. at City Hall. Meetings are open to the public.