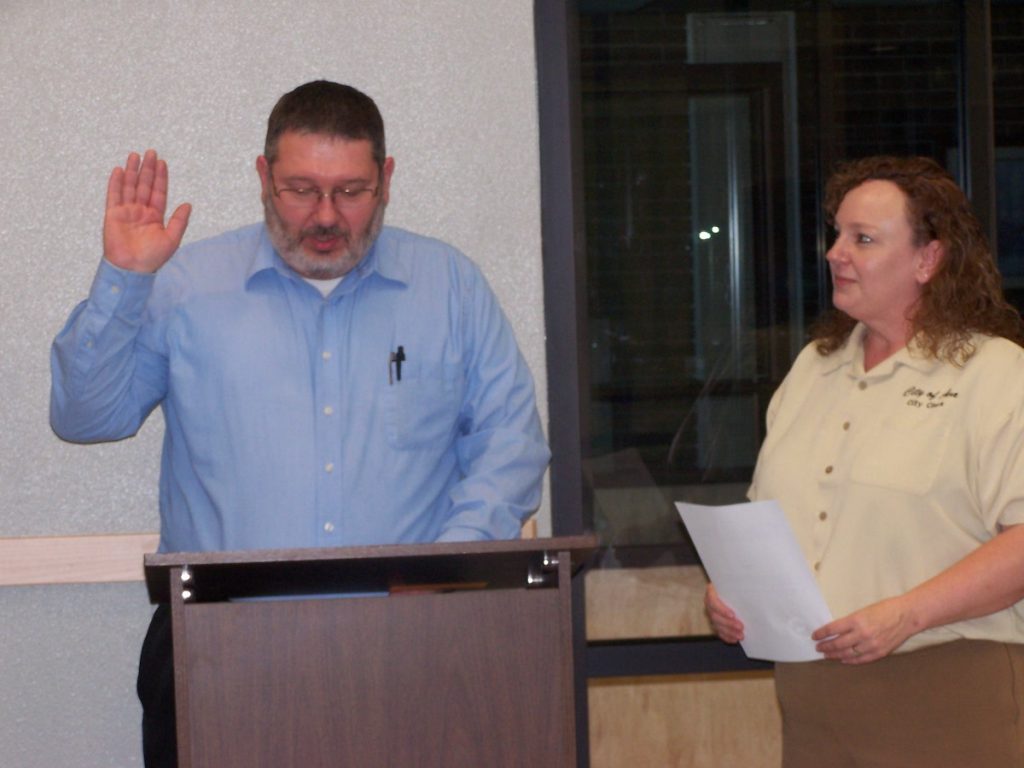 The Ava Board of Aldermen voted to appoint Noel Dye as a west ward alderman, filling the seat left open by the death of West Ward Alderman Leon Harris.  Dye will serve as an appointee until after the April municipal election, wherein Dye is an unopposed candidate for the city’s west ward.

During Tuesday’s meeting, Dye took the oath of office and was sworn in by City Clerk Suzanne Welsh.

Motions appointing Dye were by aldermen Keith Jones and Burrely Loftin.  The vote was unanimous.

Park Director Sherry Wallace was recognized by Mayor David Norman and council members for achieving the Jeff Ellis Aquatic Safety Award for the 2016 summer season at the Ava Water Park.  The award gives recognition to Wallace and the pool lifeguard staff for implementing and adhering to the prescribed industry standards for aquatic safety.  Mayor Norman also noted Wallace is very conscientious about fulfilling her responsibilities and duties at the city pool facility.

In closed session, board members discussed a proposal for restructuring job responsibilities within city hall.  According to City Clerk Suzanne Welsh, the change would afford more flexibility in the office, but at present, the offer is still under consideration as the idea has been offered to an employee, but not yet accepted.

Council voted approval to amend three city ordinances, as well as to accept Ordinance No. 1011 authori-zing the filling of an application with the Federal Energy Regulatory Commission (FERC).  The FERC application provides an exemption to the City of Ava by stating the City buys power from Missouri Public Energy Pool (MoPEP), and under direction of the municipal joint action agency, the Missouri Joint Municipal Electric Utility Commission then has the authority to represent the City in electrical power rate negotiations, if a need should arise in the future.

Ordinance No. 1008 amended the prices of grave sites for Block 11 at the Ava Cemetery.  According to the Mayor, this block is not deemed suitable for standard burial plots, but the area would serve for cremation plots.  Norman said in accordance with the change, the area will be re-surveyed, as the size of a normal grave site is 4-ft. by 10-ft.  Sites designated for cremains or ashes are 2-ft. by 5-ft.  The price established for cremation plots is $150 and burial markers are required.

Ordinance No. 1009 changed the zoning of a property site owned by Max and Wanda Murphy. The building is located at 810 SW 13th Avenue, and occupied by Area Land United County Realty and the Ava Chamber of Commerce.  The site was changed from B-2 Central Business to B-3 General Business. The change was submitted to council from the planning and zoning commission.

Ordinance No. 1010 also changed zoning designations from B-2 to B-3 for the Lester E. Cox Medical Center building located at 806 SW 13th Avenue, a site which is adjacent to the aforementioned property and owned by Max and Wanda Murphy.

All four ordinances were adopted in two readings, and each ordinance was unanimously approved.

Norman advised upcoming repairs for the “old” water tower located at the corner of SE 4th Avenue and SE 8th Street are estimated to be $44,000.  He said part of the work will be done in March or April, with the remaining tasks to be completed at a later date.  For the work, it is necessary to switch several residents to other water lines and those homes have been notified.  The repairs are part of regular upkeep and on-going maintenance.

Bid opening for the airport runway project is scheduled for Wednesday, March 8, Norman said.  Bids will be opened in Jefferson City at the office of Lochner, the aviation architect and design specialist firm.  Norman said he plans to ask the local engineer to attend the meeting.

Norman said the sidewalk project is continuing to make progress, as the workers are completing walkways on NW5th Avenue, NW 7th Street and NW 3rd Avenue.  In his comments, the Mayor noted if prevailing wage requirements are dismissed, as may be the case this year, the City of Ava may want to consider upgrading additional sidewalk areas through in-house resources. These repairs could be scheduled intermittently, allowing a longer time period for renovation.

Norman commented that Stewart-Morrison Redi-Mix, whose corporate office is in West Plains, had recently purchased Sanders Rock, and the business will be called Ava Redi-Mix Co.   Norman said he had talked with Travis Morrison, the new owner, and Morrison has several concrete plants in south central Missouri.  The redi-mix company is also state certified.  Norman said the city is in the process of cleaning up areas around the plant, and Jerry Pitts is doing some of the work.  Plans are to remove brush and line the edge of the creek with rock, to create a better spillway.  Ava Redi-Mix is slated to open in one month.

Several residents attended the meeting, including a local boy scout from Troop 68, who was observing to attain a communications merit badge.

The Board of Aldermen will re-convene for business on Tuesday, March 14, at 5:00 p.m.  Meetings are open to the public.