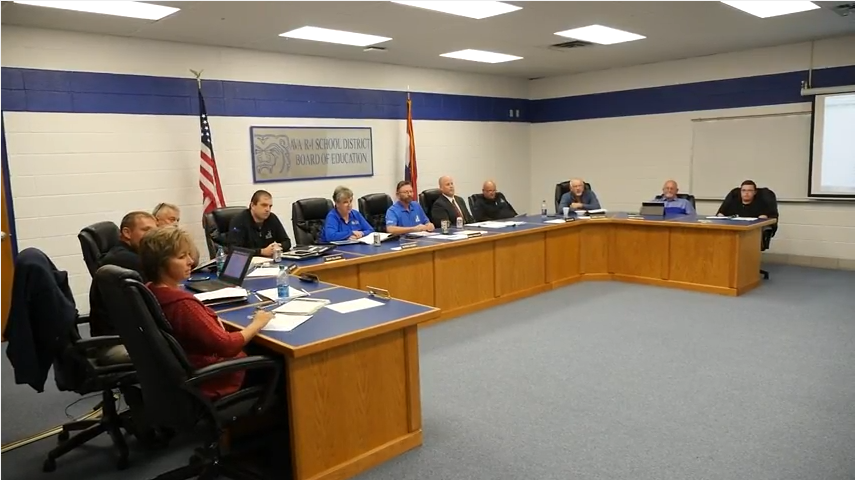 Voting actions during the Ava R-I School Board meeting Tuesday, Oct. 20, predominately focused on the annual overview of three district programs, with each program review providing an in-house assessment of needs and concerns.  The reports, which addressed campus buildings and grounds, the early childhood program, and special education, were all unanimously approved.   The board also voted to pay monthly bills totaling $358,377.28.

Superintendent Dr. Jason Dial stated student enrollment has garnered a positive increase in numbers with the addition of 12 students this term.  He noted enrollment numbers in 2014-15 were down 2.8 percent, and that trend continued through 2015-16 with a decreased enrollment of ½-percent.  Dial said there is a significant increase in the number of kindergarten students this year, but pre-kindergarten numbers are down slightly.

In the meeting it was announced a local resident had made application to purchase the three bus routes that have been unclaimed since school started in August.   Owner Charles McDonald represents the company, MR Ranch, LLC, and the board granted McDonald the Right to Contract for Servicing bus routes no. 3, 12, and 13.   However, the vote was split, with Bart Ellison and Ron Wallace voting against the transaction, and Marsha Aborn, Troy Tredway, Lowell Strong, Randy Spurlock and Vernon Johnson voting in favor.  Details of the busing agreement were not discussed.

Assistant Superintendent Mike Henry advised one of the HVAC systems in the elementary has a failed compressor and repairs to the system are underway.  Henry said parts for the overhaul are approximately $2400, but the fix may be short-lived as the unit is old and needs to be replaced.  Henry said the unit serves two areas in the elementary, the gym and music room.

It was reported the school’s new phone system is partially installed, but it will be about three additional weeks before the system is ready for operation.  Dial said insurance would defray a small portion of the expense, as the system is being replaced due to a summertime lightning strike.

In closed session, the Board accepted the retirement resignation of second grade teacher, Linda Black.  Black’s notice becomes effective at the end of the 2016-17 school year.

At the onset of the meeting, Douglas County resident Wayne Cipriano addressed the board to express his opinions about the school board’s recent decision to place the previous superintendent on a paid leave of absence.  Cipriano’s letter, in it’s entirety, is in this issue of the newspaper, and may be found in his column entitled, “What About This…..”   Cipriano also provided each board member with a copy of an article entitled, “Ten Commandments for Open Meetings.”  The editorial write-up was written by Brian Hunhoff and cites protocol standards for governmental meetings and elected officials.

The Ava Board Spotlight recognized several individuals during the evening, including students Devon Darlington and Wes Thomas for creating and directing several important school videos.  Thomas and Darlington were acknowledged for their efforts in creating a video of campus and student activities, and a promotional video about the Care to Learn Program.  Also, Judge Craig Carter was recognized for the Truancy Court program, and principals Teresa Nash, Marcella Swatosh and Clint Hall for their commitment and devotion to students.

School board President Randy Spurlock recognized Logan Little for his contributions as student representative to the school board.  Little, who recently attended the Missouri School Board Associa-tion’s fall conference with Spurlock, and other members of the board, helped facilitate a conference presentation as a representative of the Ava district.  Spurlock, Little, and Lacy Diel, last year’s student representative, were instrumental in presenting a break-out session on Student Governance, which explained Ava’s student partnership with the board of education.  Spurlock commended Little on a job well done and for successfully handling questions from the crowd.   The Ava district also facilitated sessions detailing the Care to Learn Program, as directed by Kati Burkoll, and the local Truancy Court program, which was presented by Judge Craig Carter.   Several school board members also commented on conference sessions, and how some of the information may be useful to the district.

In the facilities and grounds program review, areas of concern in the elementary building were noted as plumbing and electrical, and the need for new exterior doors.  In the middle school, it was reported the entrance on the north side of the building continues to have wintertime icing problems; consequently, the concrete is pitted from salt applications.  In the high school, the permanent gym bleachers need to be refinished.

The early childhood program review acknowledged 92 students are served through the program.  In the report, the program was cited as instrumental in helping pre-school youths transition to kindergarten, as well as adapt to a structured educational environment.  The pre-school program also offers access to speech assistance, meals, and gives parents the option to allow their student to participate in the afterschool Bears Den program.   Program needs were cited as inadequate parking, well-used playground equipment, and the latitude to enroll more students.

The special education program review cited the school is serving approximately 200 students this year by providing services to 39 elementary students, 51 middle school students, 49 high school students, 16 early childhood youths, and assisting 80 students with speech and language.  Program concerns were the need for an autism / behavior classroom, and upgrades in technology.

The next regular meeting of the board is scheduled for Thursday, Nov. 17, at 6:30 p.m.  Meetings are held in the Board of Education Room, on the north side of the Decker Library.