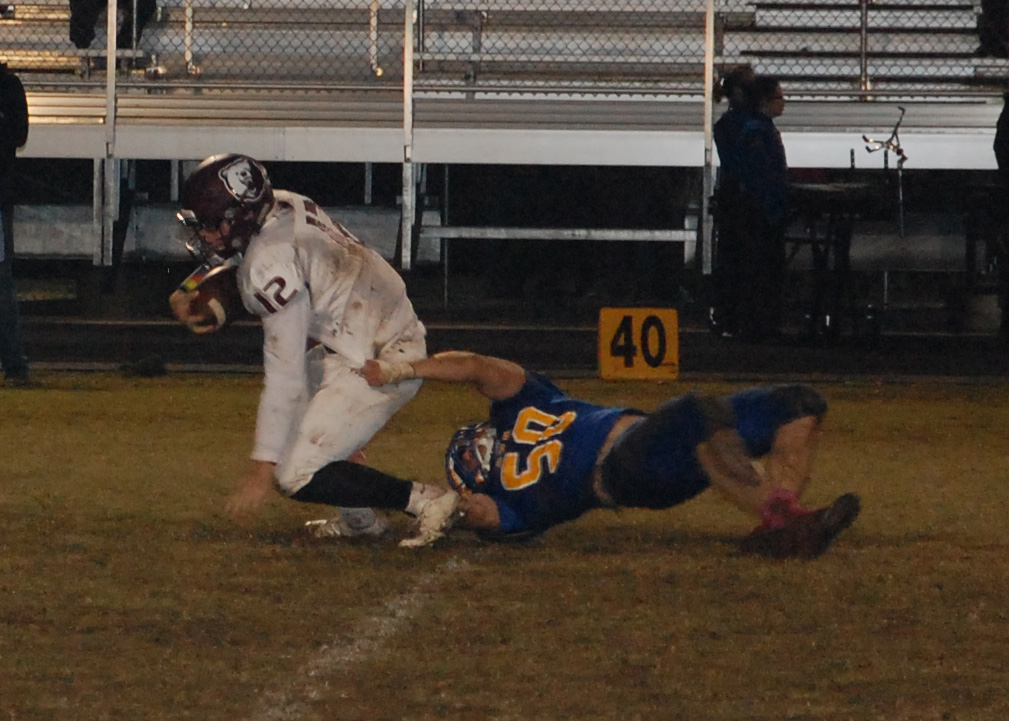 Sophomore quarterback Caleb Johnson ran for four touchdowns and passed for two more to lead the Ava Bears to a 61-27 SCA win over Willow Springs in the final game of the regular football season here last Friday night.

This week the Bears will host Strafford in the first round of district play. Game time is 7 p.m. and fans are reminded that in district play games are regulated by the Missouri State High School Activities Association (MSHSAA). Gate admission for Friday’s game will be $5 for everyone and no school passes will be accepted.

Ava jumped out to a 27-0 first-quarter lead Friday night, scoring twice in the first 2ݣinutes of the game.

Ava’s first score came at 11:22 on a 40-yard pass play from Johnson to Michael Lane. Playing on a wet field, the snap was mishandled on the extra point attempt, but holder Kelly McDonald pitched to would-be kicker Johnson who crossed for the 2-point conversion.

Willow Springs lost three yards on its first possession, and punted the ball away on 4th-and-13. Johnson received the punt and returned it 54-yards for his second score of the night. Johnson then added the point-after to give the Ava Bears a quick 15-0 lead over the Bears of Willow Springs.

Willow’s next possession ended abruptly on a fumble recovered by Ava’s Bailey Bewley, and with 7:01 still left in the first quarter, Johnson passed to Lane for a 44-yard scoring aerial.

Ava would score again with 1:07 left in the opening period on an 8-yard run by Johnson. Again Willow Springs blocked the PAT and the home team Bears held a 27-0 lead when the teams swapped ends of the field.

Willow Springs got on the scoreboard late in the second period when quarterback Alex McNew passed to Dakota McDaniel for a 35-yard scoring play with 3:14 left on the clock. The kick was no good and Ava’s lead was 27-6. McNew took over at the quarterback position when starter Bryce Duddridge left the game with an injury with 4ݣinutes left in the second quarter.

Before the half ended, Ava’s sophomore track star Stephen Copeland got the ball and sprinted 76 yards to the end zone and Johnson’s kick gave the Bears a 34-6 lead at the half.

A combined five touchdowns were scored in the third period which saw Ava extend its lead to 54-19.

Willow Springs was the first to score in the second half when Ben Wake stepped up to intercept a pitch from Johnson and went 25 yards to score. The kick was blocked.

Ava would score next on a 48-yard run by Johnson to make it 40-12, then with exactly 4 minutes on the clock Johnson took the ball in from three yards out to make it 46-12. That touchdown was set up by a fumble recovery by Kelly McDonald at the Willow Springs 18-yard line.

At 2:13 in the third period, McNew passed to McDaniel for a 66-yard scoring play to make the score 46-19, but exactly one minute later Johnson passed to Eli Maggard for a 10-yard touchdown. Johnson ran for the 2-point conversion to give Ava a 54-19 lead when the third quarter clock finally expired.

Willow Springs scored again at 10:12 in the fourth quarter on a 39-yard pass to McDaniel, then McDaniel ran the ball in for the conversion, making the score 54-27.

Ava’s final score came with 4:58 left in the game with junior varsity quarterback Connor Moran calling signals. Copeland, who was Ava’s leading rusher for the second straight week with 132 yards, scored on a 45-yard run and Johnson’s kick made it 61-27.

Lane caught two touchdown passes for a total of 84 yards, and Maggard’s 10-yard reception gave the Bears 94 passing yards on the night.

Ava had 353 yards rushing and 94 passing for a total of 447 yards. Adding the kickoff and punt returns, Ava had more than 500 all-purpose yards in the game.

Michael Lane had a pass interception in the end zone in the second quarter to prevent a Willow Springs score.

Looking at this week’s opponent in district play, Coach Dan Swofford says Strafford is a very athletic team. Although they enter district play with a record of 3-6, four of their losses were by a touchdown or less. Strafford only lost one game by more than 8 points.

Coach Swofford says Strafford has a very good quarterback who both runs and throws well, and he has good receivers. The Indians also have good team speed, according to the scouting report.

In other Class 2 District 3 games this week, Houston is at Mtn. View-Liberty, Cuba is at Mtn. Grove, and Willow Springs travels to Diamond.

Liberty finished the nine-game regular season undefeated and Mtn. Grove finished 8-1, 6-1 in the SCA with the Panthers’ only loss coming at the hands of Liberty.