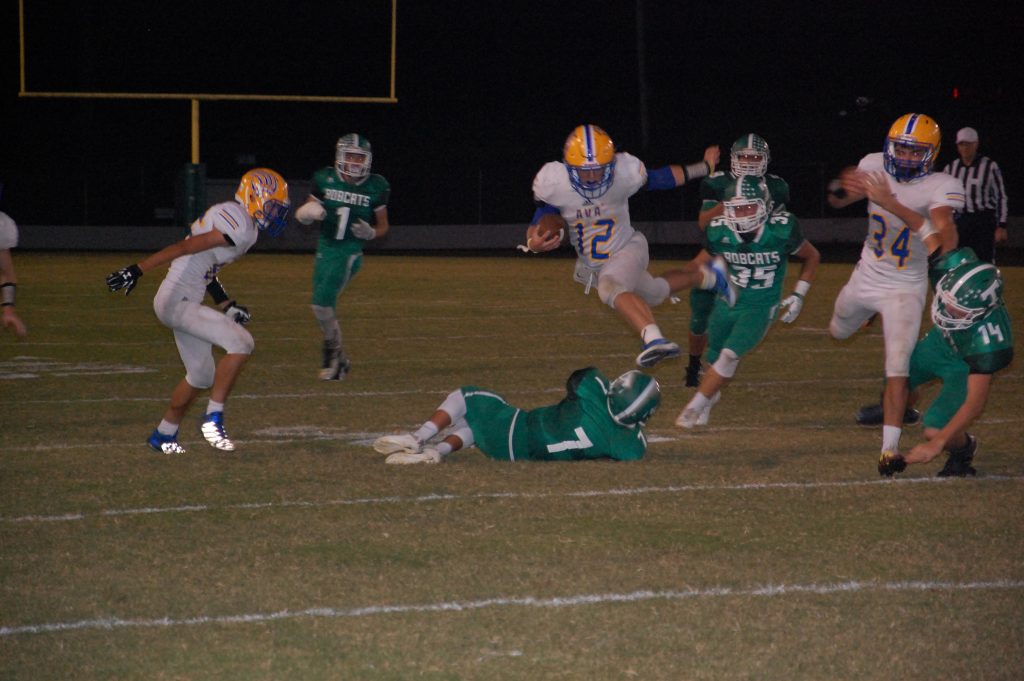 The Ava Bears took advantage of key Thayer turnovers last Friday night to take a 34-19 SCA win from the Bobcats at their homecoming.

Both teams came in with a record of 4-2, and the Bobcats entered the game ranked No. 10 in the state in Class 1.

The Bears, now 5-2 overall and 3-2 in the SCA will travel to Cabool this week, and will close out the regular season next week with Willow Springs at home. The Oct. 14 game will also feature Senior Night prior to the 7 o’clock start.

Week 10 will begin district play and as it stands right now it looks like the Bears should get a No. 3 seed and the home-field advantage.

The Bears drew first blood at Thayer last Friday night with senior Kelly McDonald scoring on a 5-yard run at 9:04 in the first quarter. The drive included a 17-yard run by Eli Maggard, who was Ava’s top rusher on Friday night with 87 yards and a touchdown.

Four different players had touchdowns for Ava, and while no one had a 100-yard night, four had 79 or more yards. McDonald had 83 yards and two touchdowns, Stephen Copeland had 84 yards and a touchdown, and quarterback Caleb Johnson ran for 79 yards on the night, with a touchdown.

After a scoreless third quarter, Thayer came knocking early in the fourth quarter when Langley connected with Austin Bowers for a 63-yard touchdown pass play. Danny Gorham’s kick pulled the Bobcats within striking distance at 20-13 with 11:49 left in the game.

It stayed that way until 3:05 when Johnson crashed through the Thayer defense for a 46-yard touchdown run. His kick put the Bears up 27-13.

On the ensuing Thayer drive, Johnson intercepted a Bobcat pass to set up a 44-yard touchdown run by Stephen Copeland that put the Bears up 34-13.

Thayer got its last score of the night on an 11-yard pass from Ayden Stone to Dillon Poulette with 45 seconds left on the clock.

Ava was then able to take a knee and run the remaining seconds off the clock for the big conference win on the road.

Defensively for Ava, Quincey McDonald was the leading tackler with 13, plus an interception.

Kelly McDonald had 10 tackles, including two for loss, and Bewley had nine tackles and the big interception to set up a touchdown.

Quincey McDonald also caught  the Bobcats’ Garrett Young from behind to stop a long run and prevent a touchdown in the second quarter.

The Bears rushed for 223 yards and had 11 yards passing for total offense of 234 yards.