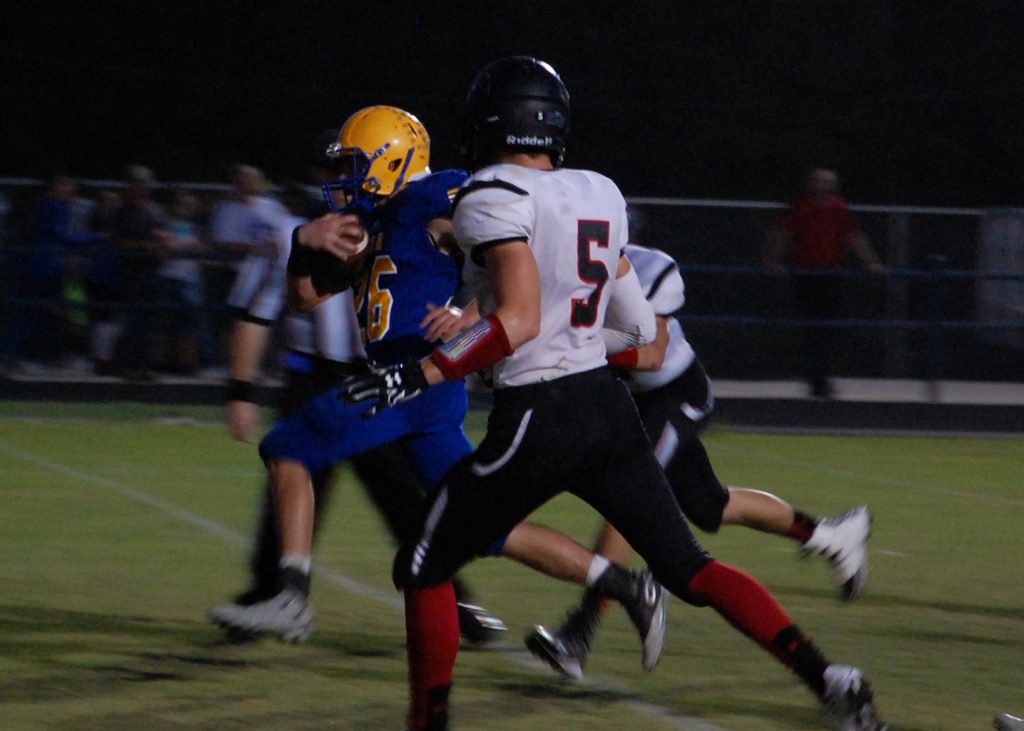 Kelly McDonald scores the first of his three touchdowns Friday night on a 14-yard run in the first quarter.

Ava’s Caleb Johnson returned the opening kickoff 86 yards for a touchdown here last Friday night to set the tone of the game.

Fifteen seconds into the game the Bears had an 8-0 lead, and the Bears went on to beat Houston 70-22 in the SCA contest.

The snap from center was mishandled on the extra point kick attempt, so Johnson picked the ball up and passed to Quincey McDonald for the two points.

This week the Bears will make the long road trip to Thayer to face a very strong and well-coached Bobcat team.

Coach Dan Swofford commented this week that Thayer always fields a good team that is fundamentally sound and will not beat themselves.

With 2:14 left in the first quarter, Kelly McDonald scored his first of three touchdowns on a 14-yard run, and before the quarter ended Stephen Copeland would add a 23-yard touchdown to put the Bears up 21-0 after one quarter.

Houston’s Chance Hunter would trim Ava’s lead with a 16-yard touchdown run at 8:08 in the second period. Hunter also run for the 2-point conversion to make it 21-8.

Half a minute later, Ava’s Eli Maggard broke a 52-yard run to extend Ava’s lead to 28-8, then with just under 6 minutes left in the quarter Johnson would break a 94-yard punt return to put Ava up 35-8.

Hunter excited the Houston fans with a 96-yard kickoff return and when Ava blocked the PAT kick the score stood at 35-14.

With 5:01 left in the second quarter Kelly McDonald scored his second touchdown of the first half on a 38-yard run. Johnson, who kicked six PATs on eight attempts, put the Bears up 42-14.

Before the first half ended, Johnson squirted through the Houston defense for a 77-yard touchdown and the Bears held a 48-14 lead at intermission.

The Bears scored twice in the third quarter  to expand their lead to 63-14. Johnson passed to Maggard for a 26-yard touchdown completion then Kelly McDonald sprinted 78-yards for a score.

Johnson kicked the point-after following the passing touchdown. The 2-point conversion following the second score of the quarter involved a little razzle-dazzle. The snap from center was mishandled so holder McDonald picked the ball up and started to run with it, then pitched to kicker Johnson who passed to Maggard in the end zone for the conversion.

Houston’s Gavin Alston shot through the line and outran Ava’s defense for an 80-yard touchdown with 6:44 left in the game. Connor Clifton then passed to Michael Clayton for the 2-points to make the score 63-22.

With Ava’s junior varsity now on the field and the game clock running, junior quarterback Connor Moran kept the ball on an option run and sprinted 36 yards to score with 2:27 left. Johnson’s kick put Ava’s final point on the board for the final score of 70-22.

Ava rushed for 489 yards and passed for 26, for a total of 515 yards from scrimmage. But, factor in the long returns and Ava had around 700 all-purpose yards in the game.

Defensively, Kelly McDonald had 13 tackles with one sack and Caleb Johnson had 10 tackles and an interception.