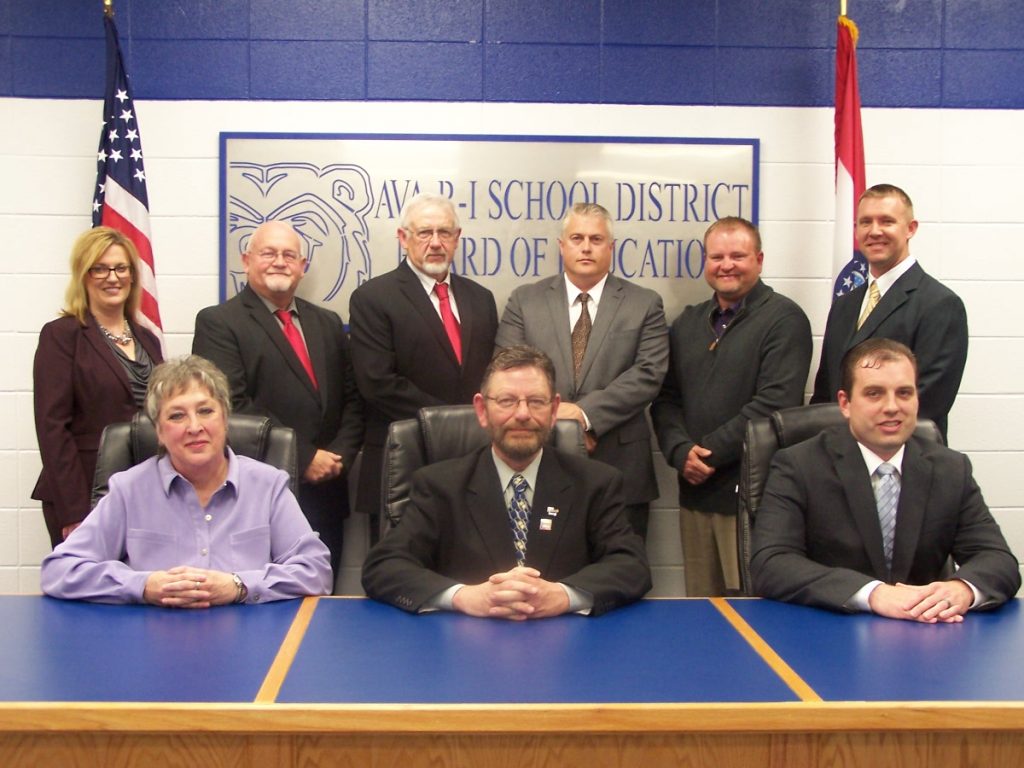 Confrontation and disagreement was the foundation of the Ava R-I School Board meeting Monday evening August 8.  At the onset of the session on student busing and transportation, board members were outspokenly split on the issue and differing opinions filled the room as point – counter point views were openly expressed by school board members, who behaved respectfully and with restraint.

However, halfway through the session, school board president Randy Spurlock lost control as harsh words interrupted the meeting when a verbal conflict arose from spectator Karen Etheridge, a staff member who is employed by the district as the Parents As Teacher coordinator.  Soon thereafter, a deputy was summoned to quell the temper of Etheridge who was overtly angry with Jerry Wagner, a retired bus driver.  According to Etheridge’s comments, she was angry with Wagner for making remarks during the meeting, stating she could not hear what the board was saying.   Board member Troy Tredway recommended Etheridge pull her chair closer to the board table so she could easily hear board conversations, and Etheridge refused.  Once Spurlock regained control of the session, the meeting continued.  However, at the conclusion of open session, the brouhaha started up once more to no avail, and the deputy asked the quarreling party to leave the room and go to their car.

The meeting began with a public comment segment wherein Bryan Etheridge addressed the board and expressed his opposition to the new contracts recently implemented by the district.  In his letter, Etheridge posed several questions, asking the board to defend their stance on the issue.   He also said board actions were “not only irresponsible, but unethical.”  In the concluding paragraph of the letter, Etheridge said he looked forward to hearing the board’s response during the August 18 board meeting. The full text of the letter can be found at the end of this article.

Addressing the issue of student transportation, the board vote was consistently split throughout the meeting with Troy Tredway, Marsha Aborn, Lowell Strong, and Randy Spurlock on the side of the newly revised contract settlement agreements, and Vernon Johnson, Ron Wallace and Bart Ellison in opposition.

Superintendent Dr. Nancy Lawler reported 13 of 17 bus routes have been filled, with bus routes no. 12, 13 and 3 open and unclaimed.  Lawler said route no. 3 is still being reviewed as to whether or not it can be broken down into transferable segments, with those pick-up / drop-off points added-on to the routes of Roger Sanders and Gary Harvill.  Lawler said the recent request for driver qualifications garnered one person who may be interested in an opportunity, but to-date, they were uncertain about making the commitment.  The name of the interested party was not provided.  Currently, she noted two school employees are willing to drive and they could be hired as short-term fill-ins.

Initially, board member Bart Ellison made a motion for the school district to assume operation of all remaining routes, which he noted as five open routes.  Ellison said these routes should be operated by the district, as that would be a more efficient use of district money.  He added, “The board is capable of hiring.”  Ron Wallace seconded Ellison’s motion.

Board member Troy Tredway said he would only support Ellison’s recommendation if it was for a temporary period of time, as “a district run transportation system cannot compete with the present system –– this system we now have in place is the most economical and efficient.”   Tredway countered Ellison’s statement about cost savings with “I can come up with a plan to save money, anyone can.  But that doesn’t mean the plan is going to work.”   Board member Lowell Strong concurred by citing a requirement from the newly-revised contract that stipulates “the district cannot operate more than four routes.”

Tredway referred to the West Plains district and a recent study analyzing their transportation system.  The assessment, facilitated by a firm in Lee’s Summit, Mo., cites that district run transportation costs have skyrocketed and the school is looking to cut costs, as well as save money.  Tredway said Douglas County has more miles than anyone else, and when compared to other districts, those schools are running low mileage routes on pavement, and Ava’s district is different with long routes and country roads, and “I’ve not found one exactly the same [for comparison].”

Ellison said he was talking about a blended system and the opportunity to make a direct comparison, with the district running several routes next year for that purpose.    Ellison rescinded his prior motion noting the contract stipulation as cited by Lowell Strong.  In a new motion Ellison proposed that the district operate routes no. 12, 13, and 3 for the school year 2016-17.  Wallace seconded.  In a 3-4 vote, the motion did not carry, as Ellison, Wallace and Johnson stood in favor, and Tredway, Spurlock, Aborn and Strong opposed.

Tredway then offered a motion for the district to operate the vacated routes on a temporary basis for a short-term only, with the understanding the routes would be sold.  Aborn seconded and the motion carried in a 4-3 vote.  Spurlock, Aborn, Tredway, and Strong voted in favor of the motion, and Ellison, Wallace and Johnson against.

The board also split votes on the transfer/sale of Rolla Swofford’s route no. 15 to Jerry Wagner, and the proposed transfer / sale of Randy Duckworth’s route no. 8 to Rhonda Heath, both were approved in a 4-3 vote.  Spurlock, Aborn, Tredway and Strong endorsed both actions, and Ellison, Johnson and Wallace opposed.  Motions were by Aborn and Strong, and Tredway and Strong, respectively.

Dr. Lawler provided the following email report on issues handled in closed session: “The Board of Education met in closed session on Monday, August 8, 2016, following the open session meeting.  Personnel issues were discussed.  No motions were taken that are required to be release per the Sunshine Law.”

The school board will convene for a regular session on Thursday, August 18.

Bryan Etheridge’s Letter to the Ava R-I School Board

Bryan Etheridge presented the following letter to the Ava R-I School Board during the Monday, August 8, transportation meeting.  The statement was read to the board as follows:

To community members, it appears that there were four board members who insisted on changing attorneys until they found someone who would agree with them and simply write a contract to benefit the drivers regardless of the impact on the school and tax payer’s dollars.

Why did you not accept the advice of seasoned school attorneys as well as MSBA attorneys?

Why do bus drivers, who are contracted service-providers have so much negotiation power while teachers and employees do not?

What did the study of area bus wages show?

Why did we increase the bus driver mileage reimbursement when gas is cheaper currently than it has been in years?

How do you justify giving the bus drivers a larger raise than other school faculty and staff?

Why has there so frequently been such a difference in contracted miles turned in by some drivers versus actual miles driven?

Why does the school not have the first option to operate a route when a bus driver gives up a route?

How will this additional expenditure of money benefit our district or our children?

What was the board’s justification for not accepting the proposed Options 1, 2, or 3, when so much money would have been saved and how does that additional expenditure benefit our district and our children?

I look forward to having these questions addressed by the board members and hearing the responses given at the next board meeting on August 18.