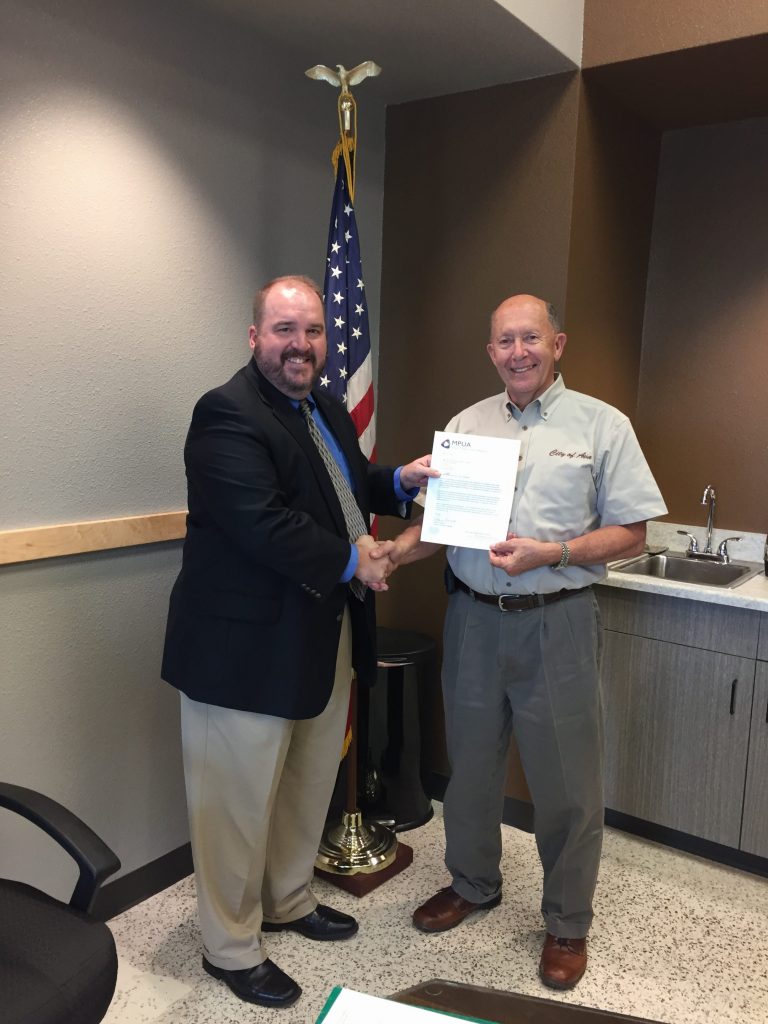 “Ava’s improvements will help the city deliver more reliable and con­sistent service to customers,” Law­son said.  He noted strengthening the lo­cal infrastructure brings greater effi­ciency to the MoPEP partnership, and MoPEP is thankful for the leader­ship in Ava and their commit­ment to improve the community.

According to information provided by Lawson, the MoPEP Power Infrastruc­ture Modernization Grant Pro­gram helps MoPEP municipal utili­ties invest in long term capital assets for local municipalities.  The in­tent is to improve the efficiency of the electric infrastructure, and grant funds must be used for purchasing capi­tal assets associated with electric util­ity operations.

Mayor David Norman reported the annual contract renewal with the Ava Cham­ber of Commerce is now due and a decision on the Chamber’s re­quest for more money was needed.

In April, Chamber board president Anita Madche had requested the City of Ava increase their financial gift to the Chamber by $9,480, for a revised total out­lay of $37,080.

In her letter to the City, Madche stated, “although the Director does not work directly for the City of Ava, I kindly request you consider a raise of $790 monthly to the financial sup­port of the Chamber of Commerce.”

Under an annual contract, the City pays Chamber salaries and supports activities with an annual donation of $27,600, an amount the city has contractually donated since 2009.

Councilman Keith Jones noted the Chamber has received a total of $193,000 in this seven-year period from 2009 to 2016.   Jones said, “I’m try­ing to be frugal in spending city money, while also looking at our responsibility as councilmen for meeting future infrastructure upgrades and expenses.”

Jones advised he had contacted other municipalities in this local area, and had talked to at least seven or eight towns that were comparable in size and most city governments did not subsidize a Cham­ber organiza-tion.  If they did provide funding, it was less than $10,000.

Alderman Stan Lovan commented that he would have liked more information and details about what the Chamber office really achieves for the business community.

Jones cited it may be worthwhile for the City of Ava to con­sider using this money to fund a city hall position and pay for someone who can focus on duties of answering questions, distrib­uting demographic materials and packets, and promoting Ava and Doug­las County as an attractive busi­ness location.   Jones said the city presently does all those items, but if the job was in-house we would have a bet­ter idea of what transpires.

Alderman Leon Harris tendered a mo­tion to renew the contract with a $200 monthly increase, rather than $790 per month as requested by the Chamber.  Council­man Loftin seconded.

Votes in favor of the increase were by Lovan, Loftin and Har­ris.  Jones voted against.

On the issue, council also voted to give Norman the authority to renew the Chamber contract, with Lovan, Loftin and Har­ris voting in favor, and Jones against. Loftin and Harris made the motions.

Council also passed an ordinance which authorized the mayor to sign a contract agreement with MoDOT for future upgrades to the Bill Martin Memorial Airport.  The improvement project is projected to cost $900,000, with the City of Ava responsible for 10% or $90,000.  The agreement adopted on Tuesday is an initial step, and solidifies the city’s commitment to move forward.  The airport project includes reconstruction of the airport runway, along with added upgrades to the connecting taxiway and apron.  The project is expected to begin in the spring of 2017.

Councilmen voted 4-0 to appoint David Davidson of Ava, as manager of the Bill Martin Memorial Airport. Norman noted Davidson has done an excellent job assisting the city with airport issues, but to-date, no action had been taken to officially retain Davidson for on-site management.  Lovan and Jones made the motions.

Norman said next year Davidson’s position will be considered an annual appointment.

Norman advised the fuel system at the airport is ready for operation, but the City is waiting for an inspector, and approval from the Missouri Department of Agriculture, Weights and Measures Division.

According to City Clerk Suzanne Welsh, several items were discussed in closed session, but no votes were taken.

The municipal court docket was approved in a 4-0 vote, with motions by Jones and Loftin.