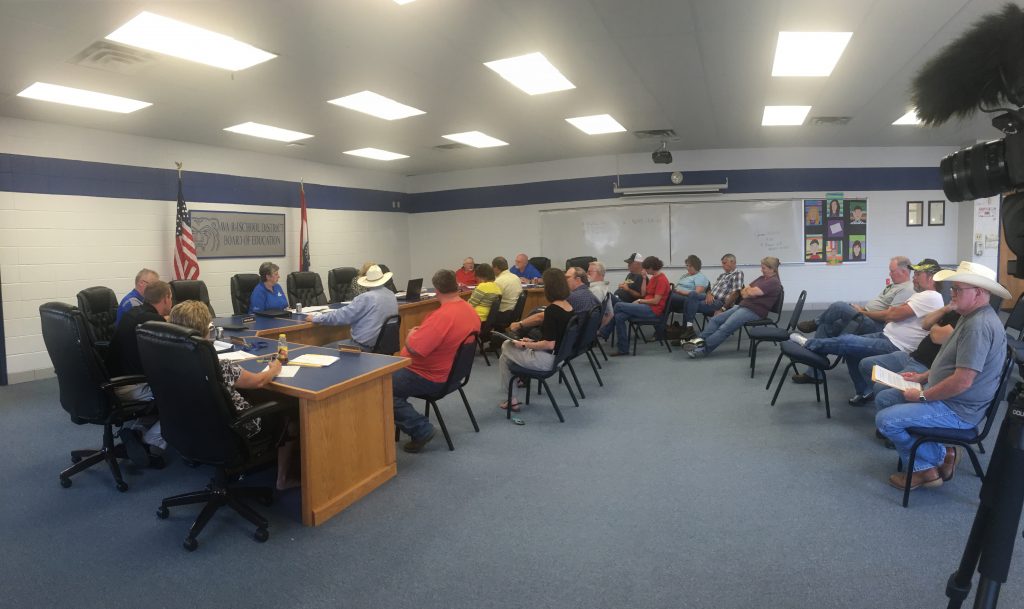 Administrator deceives board members and bus route owners – whether actions were intentional or unintentional damage was done.

The Ava R-I School Board held a transportation study session Monday, June 6, with four board members present and establishing a quorum. They were Marsha Aborn, Troy Tredway, Lowell Strong and Vernon Johnson.   Marsha Aborn, vice president of the school board, facilitated the meeting.

Board members absent from the session were Ron Wallace, Bart Ellison and Randy Spurlock.

According to Dr. Nancy Lawler, the purpose of the study session was to “negotiate transportation costs and set a transportation budget figure for the 2016-17 school year.”   However, after nearly three hours of interaction with bus route owners, and dialog about budget constraints, the issue was once again tabled.

During the study session, however, several vital points were brought to the forefront.  First, and possibly most importantly, board members and route owners were deceived about the legal contents of the transportation settlement addendum approved nearly two weeks ago, and secondly, bus route owners had an open opportunity to voice opinions and express what they would like to occur moving forward.  It was also evident by their overt actions, board members Marsha Aborn, Troy Tredway and Lowell Strong intend to work closely with route owners to achieve a comprehensive and fair agreement.

Another point politely woven into route owners comments was the fact administrators have not been trust-worthy or upfront, making the school year difficult and trying for everyone.  The route owners said the longstand­ing relationship of trust and fairness established with prior boards has been diminished, those affiliations which have been prevalent and well-regarded for over 50+ years have not only been eroded, but lost.

In the meeting, and through the course of discussions, it became apparent board members and the bus route owners had been deceived about the contents of the settlement agreement addendum, as the episode was briefly referenced in the session.  The deceit is tied to the settlement addendum, which was approved by the board on Friday, May 27.

During the May 27 meeting, and prior to adoption of the settlement addendum, administrators were specifically asked if the revised document supported the present route owners and substantiated their rights as had been previously agreed upon.  The answer from Dr. Lawler was affirmative, and the addendum garnered a 6-1 vote of approval from board members.

On Monday, it was acknowledged board members were misled about a passage in the addendum, and due to this misrepresentation, board members voted for an agreement they did not intend to support. The extra clause slipped into the adden-dum actually robbed bus owners of routes and denied future prospects.  In essence, all seven board members voted contrary to their fundamental goal.

Even though nothing was resolved in the study session, the three-hour session was productive, and several important comments were voiced.

Bus route owner Dwain Turner noted the financial needs of each bus route owner are different, and this process has messed with families and incomes.  He noted the drivers are skeptical, they feel if the settlement money is taken, they are done and will have no control or negotiating power over what happens.  They fear they are giving up future prospects.

Initially, at the onset of the session, Dr. Lawler provided handouts to the board which explained Ava R-I’s transportation expenses for 2015-16, totaling $654,188.61.  Lawler passed out sheets explaining past formulas for determining dirt mileage vs paved mileage, and the how the daily rate is figured.  BJ Sterling noted how fuel prices are checked each week as she calls two local gas stations for current prices and a small percentage of price fluctuation is built into the formula.

Lawler also re-visited three busing options which have been on the table throughout this process.  The options offer: a plan structured according to long, medium or short routes; a plan based on actual route mileage; and a plan with an established daily rate of pay.

Several times throughout the meeting, Marsha Aborn asked bus route owners to address the board and share their input, thoughts and needs.  For example, at one point she asked the group, “what would you like to see in the contract.”   Aborn also expressed a desire for the board and route owners to work together to solve the problem, and in turn, asked route owners to provide guidance and direction.  Assurances of “let’s work together” were also voiced by board members Lowell Strong and Troy Tredway.

–– route owners cited the fairest strategy was a base pay plan, which included compensation for mileage, with separate rate levels for gravel and paved roads.

–– bus drivers were told the school district will be able to sell the rights to a renewable contract, but not sell the routes per se.

–– with the board’s recent decision to reduce the number of student school days from 174 to 168, a savings in transportation costs will be generated with fewer days of bus service.

–– Strong recommended bus route owners accept the settlement money. He noted concluding this settlement action, will allow the board to get out from under the scrutiny of attorneys, and freely negotiate.

–– Bus route association members had designated four speakers, they were Larry Vinson, Rolla Swofford, Randy Duckworth and Randy Jenkins.  However, in the session, meeting rules were informal and individual questions and comments were most generally recognized.

–– During the meeting, Tredway diligently reviewed transportation numbers and re-evaluated proposed saving options using prior budget figures.  Tredway advised, that in his opinion, a realistic budget amount for 2016-17 would be $595,000.  He stated the $479,188 figure proposed by Lawler was not sensible.  He also noted the administration’s numbers were not actual numbers.  In response, Lawler said budgets are fleshed out to include unexpected cost factors.  She noted the school must retain 21% of the overall budget as a “rainy day” fund to ensure three-months operational costs are ready for use.

–– Lawler advised three bus routes will be consolidated for a savings of $31,304, or optimistically $45,000. These route changes are the result of the professional consultant the board hired to assess the current system.

But, according to bus route owner Randy Duckworth, consolidating three routes will most likely not save $31,304 as projected, and will also add more ride time for students.

Pinpointing one specific route that was changed, Duckworth said the consolidation added 45 miles of dirt road to the route, and that equates to adding at least another 45 minutes, possibly an hour, to the overall run.   Rolla Swofford and Randy Jenkins concurred on the issue, and added, “the professional guy contracted by the school board was inaccurate in his route assessments.”  In response, Strong and Tredway asked route owners if they would be willing to help the board establish a better system of bus routes.

Closing the meeting, Aborn once again posed the goal of working together to solve the problem, noting she welcomed the association’s input on the issue.

The school board has a budget session scheduled for Monday, June 13, at 4:00 p.m.; the board will meet in closed session prior to the meeting.  The standard monthly meeting is set for Thursday, June 16, at 6:30 p.m.   A follow-up to this session was not discussed.

News Editor’s Note: While writing about this session, a need arose to not only explain our reporting process, but also add a disclaimer to our accounts of Ava R-I proceedings.

As many know, our reports of open sessions are recorded on video and in print, so our accounts are accurate.  We may misspell a name or not understand an acronym, but the facts on what transpires are accurate.

However, reports of closed session meetings are different.  Those details come to us from administrators, and many times, the whole story is not relayed, and/or all voting actions are not reported.  On more than one occasion, we have also been denied access to records.

These issues fall under Sunshine Law –– a set of governmental rules to promote transparency and foster sound relationships between governmental agencies, community, and media. The Law also protects topics such as personnel, real estate negotiations and legal court battles.

However, the Law is not meant as a shield to hide behind, and yet, it is consistently used in this manner.

In this most recent session of the board, a board member commented the Ava R-I school district has spent an extensive amount of money on attorneys.  It was noted over 40 lawyers reviewed the settlement addendum document, to no avail, as the contract could not be rescinded or broken.

And, regarding Ava administrators and their stance on transpar­ency and openness, and the abil­ity to work amicably with others –– just ask a local bus route owner or driver about their one-on-one experience and how they have been treated.