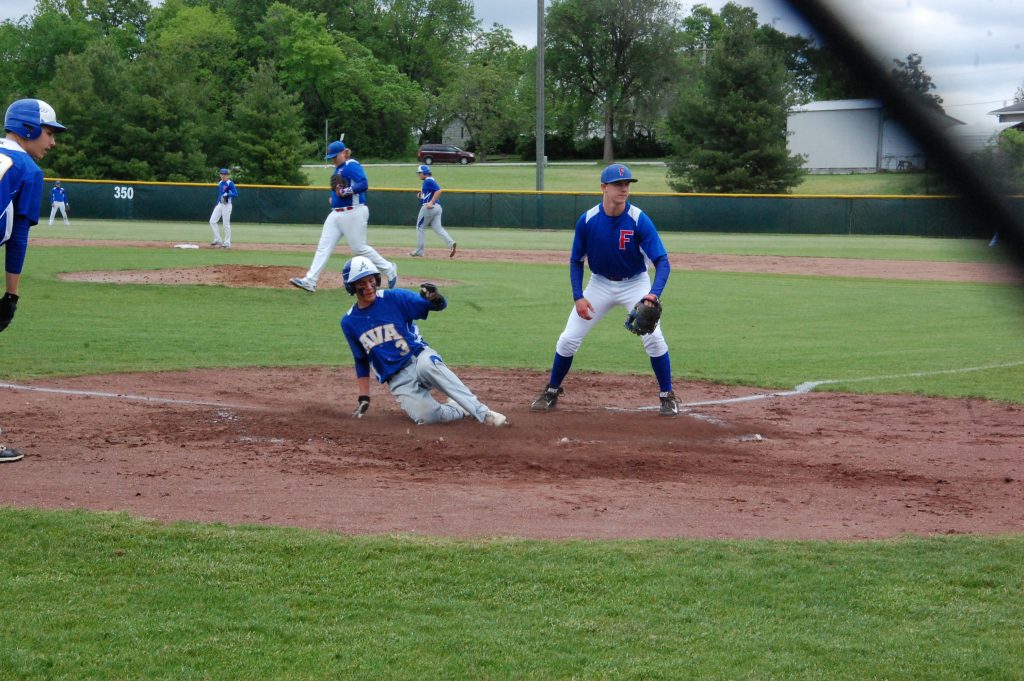 Thomas Emerich scores on a wild pitch in the game with Forsyth here Monday. Ava won the game 5-2.

The Ava Bears boosted their season record to 12-7 with a non-conference win over Forsyth, 5-2, here Monday afternoon.

The Bears were also scheduled to play at Gainesville on Tuesday.

The team will wrap up the regular schedule in the Ash Grove Tournament next week before beginning district play here at Ava on Friday, May 13. Games at Ash Grove begin on Saturday with Ava playing Bolivar at 11:30 and Marionville at 2 p.m. Ava will face Ash Grove at 4:30 Monday, and records will determine play for the finals on Tuesday, May 10. The third place game will begin at 4:30 with the championship game set to begin at 7 o’clock.

The Bears traveled to Salem last Wednesday to make up a conference game rained out earlier in the season and fell 4-0 to the Tigers. The loss dropped the Bears to 4-3 in conference play.

Jon Arzt got the win for Salem while Zach Hunsaker took the loss for Ava.

Ava had only three hits in the game, one each by Thomas Emerich, Kolton Ritter and Chase Dodson.

Each team had three errors in the game.

On Thursday the Bears boarded the bus again and traveled to Rogersville where they fell to the Wildcats 3-1.

Ryan Gruener got the win for Rogersville; Nick Sterling took the loss.

Ava had four hits in the game but produced only one run. Rogersville came up with three runs on five hits. Each team had an error.

The Bears hosted Forsyth on a blustery Monday afternoon and took a 5-2 win in a game that was preceded by recognition of the team’s two senior players, Zach Hunsaker and Gerald Smith. Smith has had to sit out the season after suffering a broken ankle in the early spring.

The Bears jumped on Forsyth early, picking up two runs in each of the first two innings, then adding an additional run in the fourth.

Forsyth got both its runs in the sixth inning, forcing Ritter to trade places with second baseman Thomas Emerich who would finish the game for the Bears.

Ava will host the Class 3, District 10 tournament beginning Friday, May 13. Tournament seedings were being decided on Wednesday.