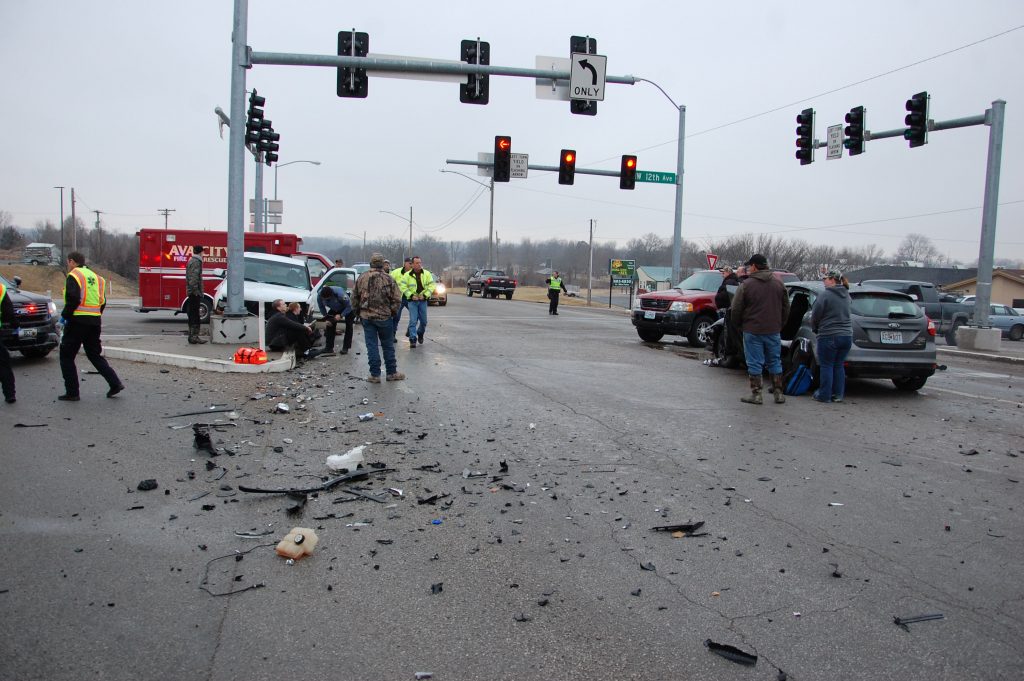 Three people were transported by ambulance from the scene of a two-vehicle crash at the intersection of Highways 5 and 14 in Ava last Sunday afternoon.

Ava Police reported that the crash occurred at 4:50 p.m. when one car made a left turn into the path of an oncoming vehicle on Highway 5.

Injured were Megan Swearengin and passengers in her car, Derrek Ross, 23, Mansfield, and Lars A. Swearengin, 22, Mansfield.

Refusing treatment by EMS were Strong and a passenger, Amanda M. Davis, 21, of Mansfield.

Assisting at the scene of the crash in the busy intersection were Cox Ambulance-Ava, City of Ava Fire and Rescue, and the Missouri State Highway Patrol.

The police report stated that the roadway was wet at the time of the crash.

Only Megan Swearengin was wearing a seatbelt at the time of the collision, according to the report.

The Highway Patrol investigated a one-vehicle crash Saturday afternoon east of Ava and resulted in minor injuries to the driver.

The Troop G report said Rick V. Hendrix, 63, of Ava, was traveling east on Highway 14 in a 1998 Ford Escort when the vehicle ran off the right side of the road and overturned.

Hendrix was taken by ambulance to Ozarks Medical Center in West Plains.

The wreck was investigated by Sgt. Logan Elliott of the Highway Patrol.

A Bradleyville man was taken to Cox South Hospital in Springfield with moderate injuries following a 1:20 a.m. crash in Taney County Sunday morning.

The Highway Patrol’s Troop D reported that Christopher E. Whittaker, 30, was traveling at a high rate of speed on Highway 76, four miles northeast of Taneyville when he crashed his Dodge Durango which ran off the road, hit a tree, overturned and caught fire.