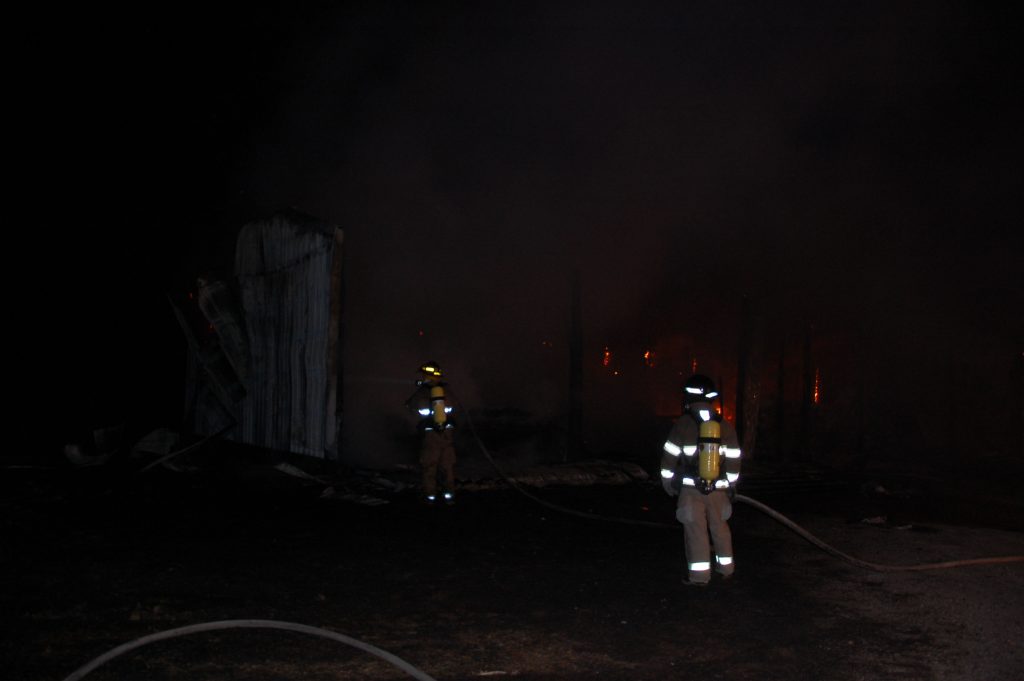 The finish shop at Lakey's Custom Cabinets was reduced to rubble last Friday night when fire destroyed the building located in the Ava Industrial Park in north Ava. No one was hurt in the fire but firefighters and bystanders received quite a scare when a propane tank exploded inside the building. Members of the Ava City Fire Department are seen in the photo above.

“Tell the people we’re still open for business,” was the word from Gary Lakey Monday after a building occupied by the finish shop of Lakey’s Custom Cabinets was destroyed by fire Friday night.

The metal building located on the Sentinel property in the Industrial Park in north Ava was used for finishing cabinets and for applying cabinet tops for the business. Due to the nature of work done there and the materials used, the building contained lots of highly-flammable materials.

Ava Fire Chief Tom Woods said the building was fully involved in fire when the fire department got the call just after 8 p.m. Friday. He said any speculation as to the cause would only by a “wild guess.”

Because of the extreme heat and the amount of damage, the electrical boxes were all melted.

Woods did say Lakey told him it was a common practice to kill the power to all the equipment in the building before leaving every day.

Cabinets are actually built at another location separate to the building that was destroyed, and Lakey said Monday that equipment to replace what was lost “has been ordered and is on the way.”

No one was hurt in the fire, but shortly after the fire department’s arrival, there was a huge explosion that was later determined to be a propane tank located inside the building. That explosion was heard across town and blew sections of metal siding or roofing a hundred feet or more.

Lakey said he thought the 100-gallon tank was empty and had even forgotten that it was in the building.

Woods said the fire call came in at 8:06 p.m., but the original call said it was a storage building behind the Copeland plant. Upon further investigation, it was determined to be the Lakey building which is adjacent to the Copeland property, but accessed behind Dollar General, off NW 12th Avenue.

The initial call came from someone driving on Highway 5, Woods said.

Copeland security personnel routinely patrol the area behind the manufacturing plant and told the fire chief there was no indication of fire less than an hour prior to the time that the fire was through the roof.

John Wallace, who has equipment stored in an adjacent building, said he had some equipment damage but the other metal building was not affected by the fire.