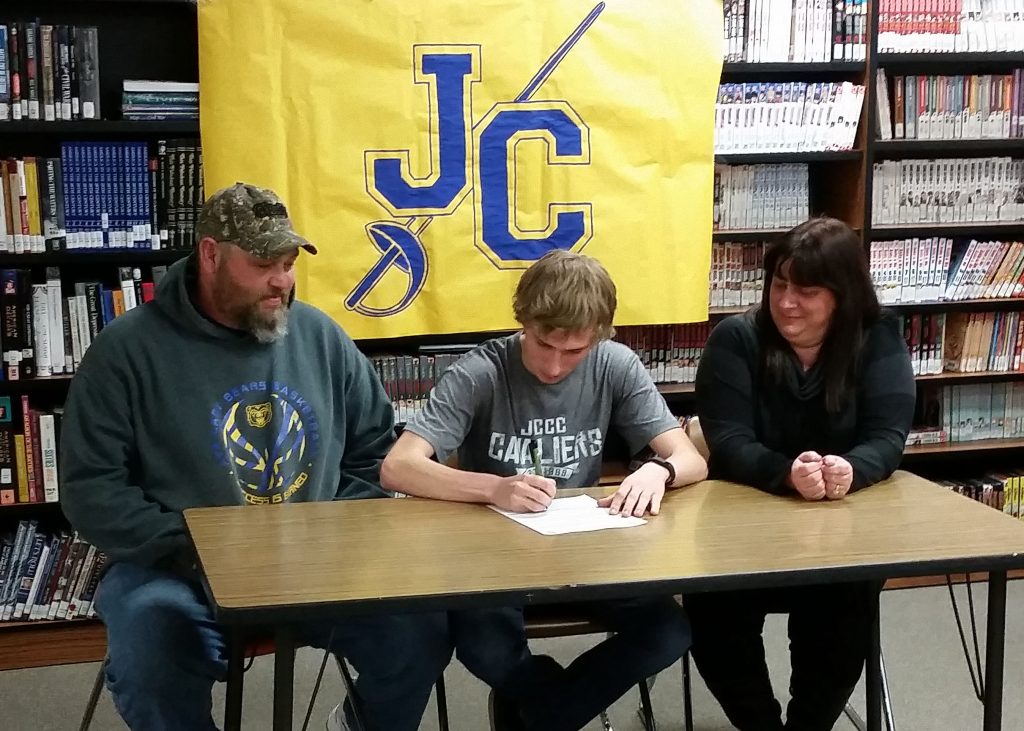 Ava High School senior Caleb Stillings signed a letter of intent on Tuesday to attend Johnson County Community College in Overland Park, Kan. His coaches there will be Mike and Katherine Bloemker.

As Caleb signed the letter, with parents Bryan and Renee Stillings looking on, Coach Liz Kyger stated, “Caleb, you have set the bar so high for Ava cross country, it may possibly never be matched.”

Some of his highlights include:

In 2012, his freshman year, Caleb was No. 3 on the Ava team that made all state, only the 2nd sports team in the history of Ava to earn an all-state title and banner.

That year he qualified for state by placing 9th individually which earned him all district status.

In 2013, Caleb’s sophomore year, he won the district individual title by beating Mtn. Grove’s John Burd and Liberty’s Daylan Quinn. He then went on to finish will all-state honors individually by placing 10th.

That same year Caleb set a new school record and had the highest placing in Ava cross country history.

In 2014, Caleb’s junior year, he was all-district by placing 2nd behind Daylan Quinn. Then, tragedy struck as Caleb sprained his ankle the night before the team left for the state championships. Caleb still ran but it was a major disappointment as he would have most certainly finished again in the top 10.

In 2015, his senior year, Caleb was all-district in 2nd place again finishing behind Quinn. But at state he finished in 3rd place with a spectacular finish right at the line, three-tenths of a second ahead of the runner from Lamar, but ahead of Quinn by three spots.

During his senior year Caleb rebroke his own school record with highest placing and fastest time at state in Ava cross country history.

In all of his races, Caleb’s personal record is a 16:28 earned at MSSU, which is the fastest finish of all time of any Ava runner on a certified course. That PR this year has earned him National Elite Status on the high school level.

Some of his other honors:

* Southwest Cross Country Coaches Association voted him all-area in 2013 and 2015;

* No. 1 runner for Ava sophomore, junior and senior years;

* Member of the elite Springfield Track Club which competed in Albuquerque this past summer; and

Coach Kyger summed it up by saying to Caleb, “All that have run with you, watched you develop as a runner and coached you are immensely proud of your accomplishments at our high school and we wish you the best of luck as you continue your running career.”