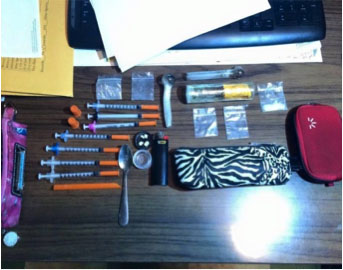 On Jan. 1, Sheriff Chris Degase and Deputy Taylor Wallace conducted a traffic stop on Highway K that resulted in arrrests.

Michael Royston, Seymour, was arrested on multiple warrants and cited for DWI.

Deputy Gabe Stroud also conducted a traffic stop just minutes into the New Year, as well, on County Road 509.  As a result of this traffic stop Anna Marie Davis, Mansfield, was arrested and cited for DWI.

On Jan. 1, Corporal Nathan Long and Deputy Wallace stopped a vehicle in the Signal parking lot with multiple people inside. Two of those individuals, Bradly J. (B.J.) Henry and Cassie Mincks, were arrested.  Both were still being held in the Douglas County Jail at last report.

Henry is charged with two felony counts for possession of controlled substance, Class D felony resisting/interfering with arrest for a felony, and misdemeanor unlawful use of drug paraphernalia. His bond was set at $20,000, 10 percent cash or surety bond.

Mincks was arrested on a probation violation warrant with no bond set, plending a hearing.

On the evening of Jan. 2,  K-9 Yadi made a positive hit on a car located at Gentry Roadside Park north of Ava. As a result, Deputy Stroud and Deputy Wallace arrested two subjects out of Arkansas.

The subjects were found to be in possession of methamphetamine and a large quantity of drug paraphernalia.  Both subjects are currently being held in the Douglas County Jail.

Warrants were obtained for felony possession of a controlled substance (methamphetamine), misdemeanor possession of up to 35 grams marijuana, and misdemeanor unlawful use of drug paraphernalia for both subjects.

The two were identified as Stacy Ross and Ross Rains, both out of Arkansas, and both are being held on a $20,000, 10 percent cash or surety bond.