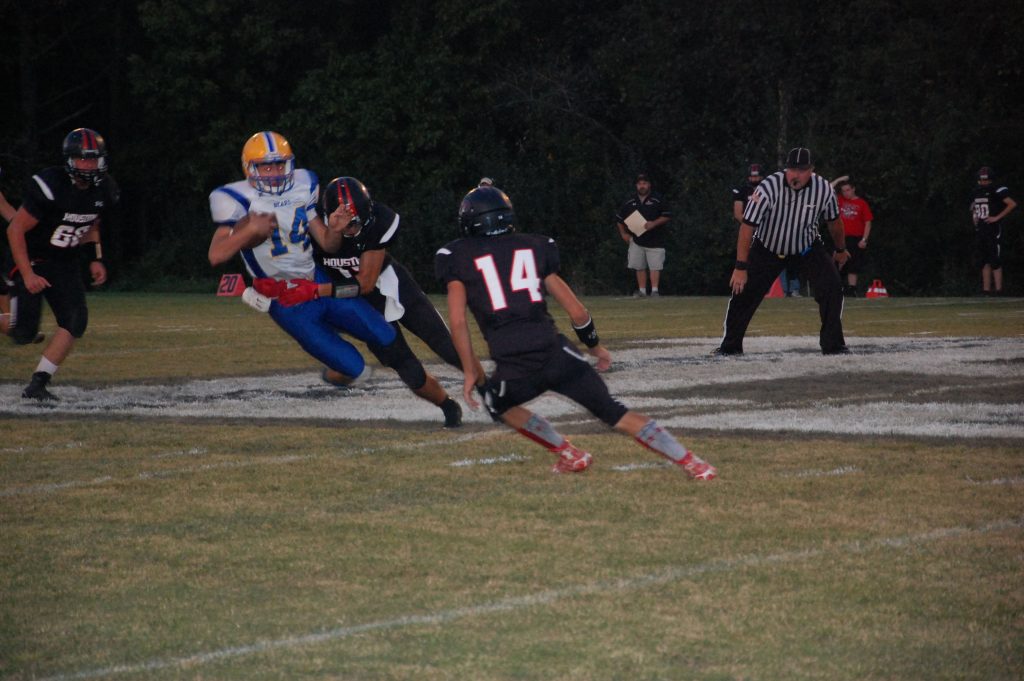 The Bears struggled to move the ball against the Tigers, but were able to break the big plays. At the same time Ava’s defense was good enough to limit Houston to just two touchdowns.

Ava took a 7-0 lead with 2:57 left in the first quarter on a 58-yard sprint by Caleb McFarlin and the kick by Caleb Johnson.

The Bears would expand their lead to 13-0 at 4:19 in the second period on a 51-yard break-away run by Paul Porter. Johnson’s kick was no good.

Before the half ended, Houston got on the board on a 4-yard run by Chance Hunter with 38 second remaining. The point-after attempt by C.J. Lee was blocked and the Bears would hold a 13-6 halftime lead.

Ava took the opening kickoff of the second half and on the first play from scrimmage, Nate Bray broke free and ran 62 yards to score with 11:41 still on the clock. Johnson’s kick gave the Bears a 20-6 advantage.

The Bears were unable to capitalize on a Houston fumble and had to punt the ball away, backing the Tigers up to their own 18-yard line. The Houston team then put together an 82-yard scoring drive that ended with a one-yard dive by Hunter at 3:03 in the third quarter.

Quarterback Nathan Poynter passed to Austi Schock for the 2-point conversion to trim Ava’s lead to 20-14.

The final score of the game came at the end of the third quarter on Ava’s ensuing drive. Bray found an opening around the left side of the line and scampered 51 yards to paydirt. Porter ran for the 2-point conversion for the final score of 28-14.

The drive included a 16-yard pass completion from Johnson to McFarlin for an Ava first down at midfield prior to Bray’s touchdown run.

On Houston’s first possession of the fourth quarter, the Tigers drove the ball all the way to the Ava 4-yard line, but Ava’s defense held and the Bears would take over on downs at the Ava 6.

Twice more the Bears’ defense would hold on fourth down, allowing the Bears to take over on downs and finally run out the clock to secure the victory and spoil Houston’s homecoming.

Bray was Ava’s leading rusher with 158 yards on 19 carries and two touchdowns.

Bray also had another good night on defense, with 16 tackles, four for loss, and a blocked extra point attempt.

Kelly McDonald had 11 tackles for Ava.

Ava junior varsity defeated Houston Monday night to go to 5-0 on the year.

The JV Bears will host Thayer next Monday night at Silvey Field.