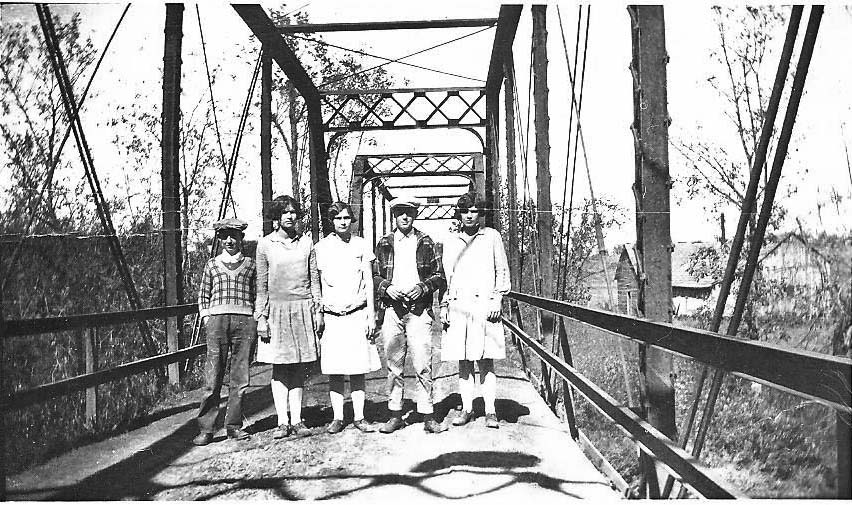 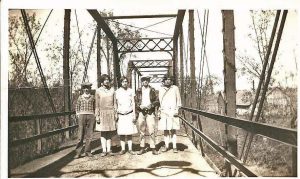 As we reflect back on this grand ole bridge, she withstood an amazing amount of traffic from the time it opened in 1914 until July 2015; it was used by those living nearby and for those that traveled just to see it, cross it, and swim under it. It was one of the first ones in the area made of iron, and I am sure for those that saw it for the first time standing tall-it was considered to be a “Grand Lady”.

This two-span bridge was built by J. H. Murray according to the bridgehunter site online, and then assembled across Big Beaver at old Rome, Missouri, right beside the swinging bridge that it replaced. This was located off of Hwy 76 and east on Douglas County Road 76-436. This is roughly halfway between Bradleyville and Ava.

Way before this bridge appeared on the scene, during the Civil War, a fort was built on the banks of Big Beaver to protect the gristmill that was actively grinding meal for the troops. It became a large Union re-supply operation for horses, wagons, as well as weapons storage, medical services, food stocks for animals and soldiers. It was named for the owner of that property, William Lawrence. The Confederates called it Fort Lawrence and others including the Federals called it “Lawrence Mill” or “Beaver Station”.

General Marmaduke dispatched Colonel Emmett MacDonald with 270 Missouri Troopers with the intent of destroying the fort; they arrived in the early morning of January 6, 1863 and made a surprise assault on the fort. The Post Commander, Major William Turner, was warned that morning of a possible raid but did not believe it.

The fight was over within a few minutes. Major Turner was wounded and six of his men killed. Colonel MacDonald then gave the orders to burn the fort.

By some coincidence the log Officers Headquarters in which Major Turner and Captain Pleasant T. Green lived, was NOT set afire. The block house fort structure was destroyed.  Afterwards, the headquarters building was used as a private residence and at some point possibly in the 1960’s, it was bought by businessmen in Ava, disassembled, each log marked for identification, and moved to Ava and reassembled.  It still stands as a museum just east off the square.

This was all in Taney County before it was given to Douglas County in 1864 and before the Rome Post Office was established in 1867.  According to the book, A Reminiscent History of the Ozarks Region”, by Goodspeed Brothers (1894), Francis “Frank” Richards moved to Douglas Co MO, built the store by the mill, then applied and received his appointment as the first Postmaster, January 10, 1876.

For more detailed information and photos, see the White River Valley Historical Quarterlies: Fall 2008 / Spring 2009 / Summer 2009 / Fall 2009 / and Winter 2009. This includes Fort Lawrence; Rome; the Lawrence family history plus others including the Mackey family; more on the Command Post; and the businesses there. A photo of the Rome Bridge in the process of being built in 1913-1914 is on page 8 of the fall 2009 WRVHS issue that was gleaned from the Douglas County Historical & Genealogical Society Journal article (Summer 2004) by Kenneth Brown.

Also, there is a Facebook page for the Rome Bridge, where additional photos and details may be found.