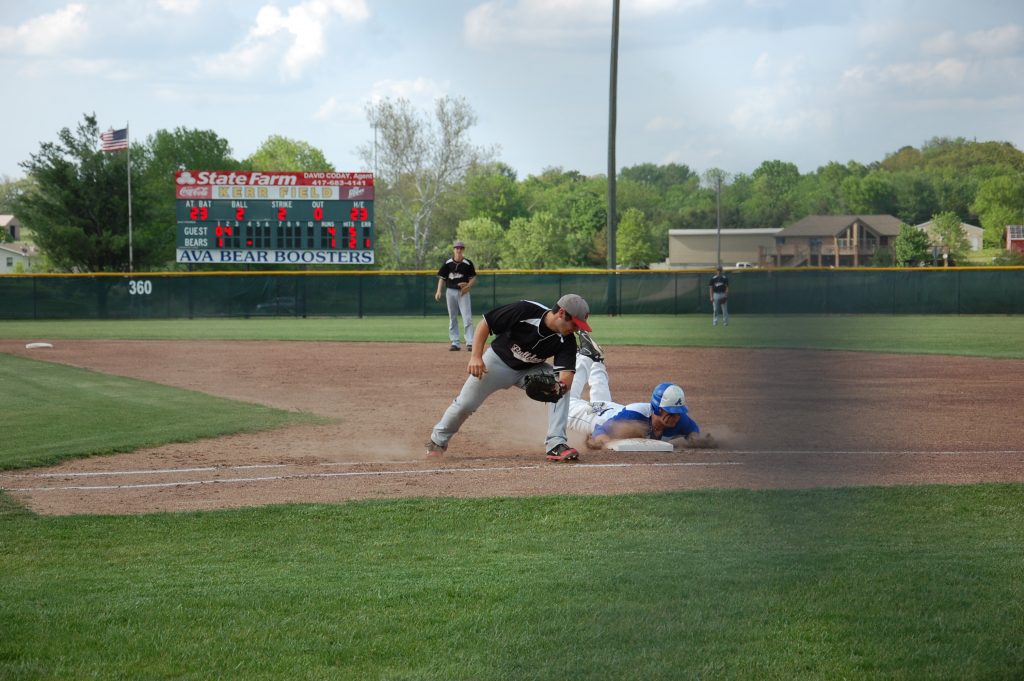 The Ava Baseball Bears are not exactly where they would like to be with the season winding down and district play about to start.
The Bears have lost their last three games – albeit to good teams – and four of their last six.
The Bears have the Ash Grove Tournament on the schedule beginning this weekend as a final tune-up before entering district play next week.
The Class 3, District 10 tournament will be hosted by Mtn. Grove. The Bears are the No. 3 seed and will play Willow Springs in first round action Friday, May 15, at 6:30 p.m.
Mtn. Grove and Licking are seeded 1 and 2, respectively, and both have first round byes in the six-team tournament.
Houston (4) will play Liberty (5) at 4 o’clock Friday, May 15, with the winner to face the top-seed Panthers at 4 p.m. Monday, May 18. The winner of the Ava-Willow Springs game will play Licking  at 6:30 May 18. Finals will be Tuesday, May 19, at 4:30.
The Bears hosted Rogersville for Senior Night last Thursday at Kerr Field and fell to the Wildcats 7-3.
Rogersville held a 5-0 lead before Ava finally got on the scoreboard with a run in the bottom of the fourth inning. The Bears added one in the fifth and one in the seventh.
Ava left 16 runners on base in that game, leaving the bases loaded in each of the first three innings. The Bears also had the bases loaded in the sixth inning with no one out and failed to score.
Morgan Smith was 4-for-5 in the game and drove in two Ava runs. Zach Hunsaker was 1-for-3 with a double and an RBI.
The Bears were on the road to Forsyth Monday afternoon and took the Panthers down to the wire before losing the game 4-3.
With the Bears down to their last out in the seventh, Caleb McFarlin hit a solo home run to tie the game at 3-all and force Forsyth to bat in the bottom of the inning. Forsyth answered the challenge, however, and scored the winning run on a sacrifice fly.
Zach Hunsaker pitched a strong game for the Bears allowing eight hits and walking one Forsyth batter.
Chase Gastineau had two hits and a run scored for the Bears. McFarlin scored two runs for Ava on Monday.
The Bears hosted Gainesville in the final home game of the season Tuesday at Kerr Field and fell to a 6-1 decision. The Bears scored one run in the bottom of the first inning and that’s all they would get. Nick Sterling went the distance on the mound for Ava and took his first loss, falling to 4-1.
Cody Huff was 2-for-4 on the day and Zach Hunsaker had Ava’s only RBI of the game. Gastineau had the Bears’ only extra base hit, a double in the first inning that led to Ava’s only run.
Smith is leading the Bears in hitting with a .518 average. He also leads the team in average with runners in scoring position, at .469, and in slugging percentage at .661.
Shannon Huff leads the team in runs batted in with 22. Smith and Cody Huff had 21 RBIs apiece.
Chase Gastineau leads the team in runs scored with 24.