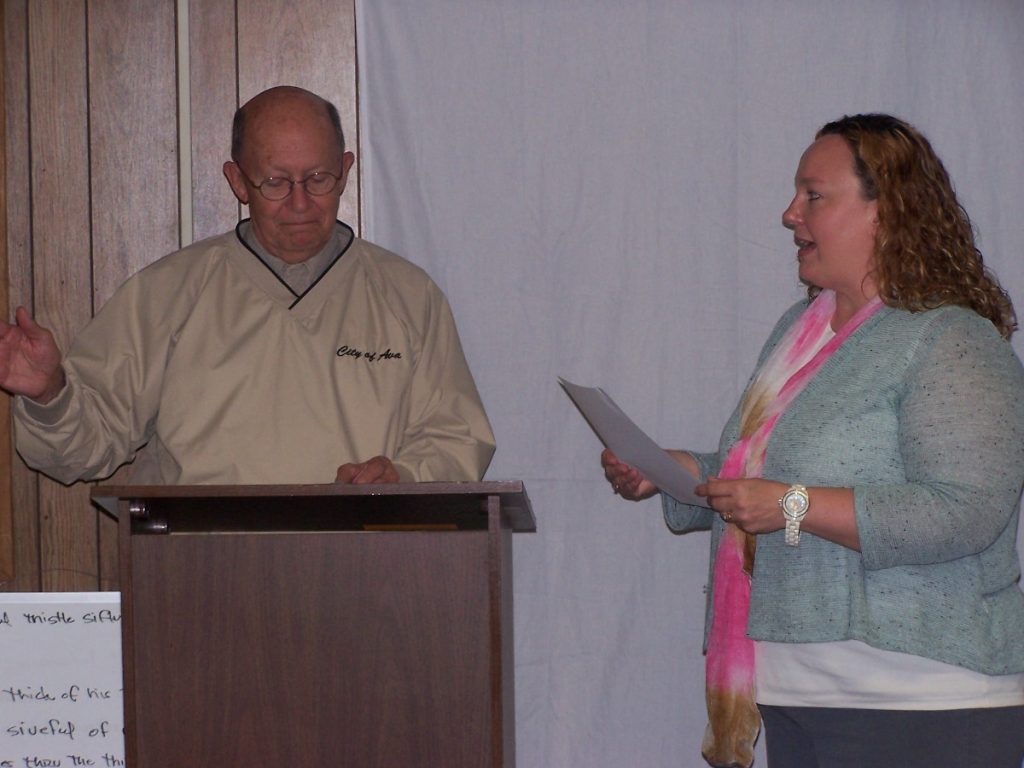 The Ava Board of Aldermen met on Tuesday, April 14, at 5:00 p.m., with the first item on the afternoon agenda the acceptance of the voting results from the General Municipal Election held in Douglas County on April 7, 2015. The official tally was certified by Karry Davis, Douglas County Clerk, and council adopted the election voting results via City Ordinance No. 983, wherein the official ballot count was stated as:

The official election results were accepted by council in two separate voting actions, with motions from aldermen Burrely Loftin and Bill Long, and Bill Long and Keith Jones. Both votes were 4-0.

At the recommendation of Mayor David Norman, councilmen voted 4-0 to appoint Suzanne Welsh as city clerk for the ensuing year. Motions to re-instate Welsh were given by aldermen Loftin and Lovan.

At this point in the meeting, the Mayor and Loftin were sworn in, with the oath of office administered by City Clerk Suzanne Welsh.

Mayor Norman advised newly-elected west ward alderman Leon Harris will take the oath of office at a later date. Harris is presently recovering from surgery and plans to assume the elected position very soon. But, during Harris’ absence, Norman said west ward alderman Bill Long will continue to fill the position on the board.

In recognition of Long and his commitment to city council, Mayor Norman and the Ava Board of Aldermen awarded Long a special plaque recognizing six-years of service to the City of Ava, as a west ward alderman. Long was first elected to the west ward position in 2009, and will be stepping down as soon as Harris is able to assume the job.

In conjunction with the election, the following annual appointments were unanimously approved:

Motions to adopt the slate of annual appoint­ments were given by Loftin and Lovan.

Alderman Burrely Loftin was also re-instated as council president. Councilmen Long and Keith Jones made the motions, with the vote 4-0.

During the meeting, bids for the repair of the maintenance shed roof were opened, and JG Home Repair was selected as the lowest bidder. Only two contractors had submitted proposals for the project, with Lewis Construction offering repair costs of $12,900, and JG Home Repair, $10,767.

Aldermen Bill Long and Burrely Loftin tendered motions to accept the lower bid, and the vote was 4-0.

Mayor Norman updated council on Ava’s recycling center, citing the organization’s plans to discontinue service to the community. Norman said the recycling center is a positive for the City of Ava, as it sends a environmental message, but also serves as an added feature and attractive benefit for the community. However, Norman noted the present facility is not thriving; consequently, the City of Ava is researching whether or not to step in and maintain the center and offerings.

In the report, Norman cited recent visits and talks with other recycling facilities, noting effective operations in Marshfield and Branson. He also advised of his intentions to contact the waste management district, and SCOCOG, for additional help.

However, at present, the City is only gathering information to see what options are available, and if opportunities may be pursued.

Administrative Assistant Peggy Porter reported city financials are up from last month, with totals moving from $1.8 to $1.9 million. Porter advised that supervisors are starting to review budgets and expenses for the upcoming fiscal year.

In a 4-0 vote, council approved the municipal court docket as presented.

The aldermen and city officials will reconvene on Tuesday, April 28, at 5:00 p.m. in council chambers at Ava City Hall. Meetings are open to the public.