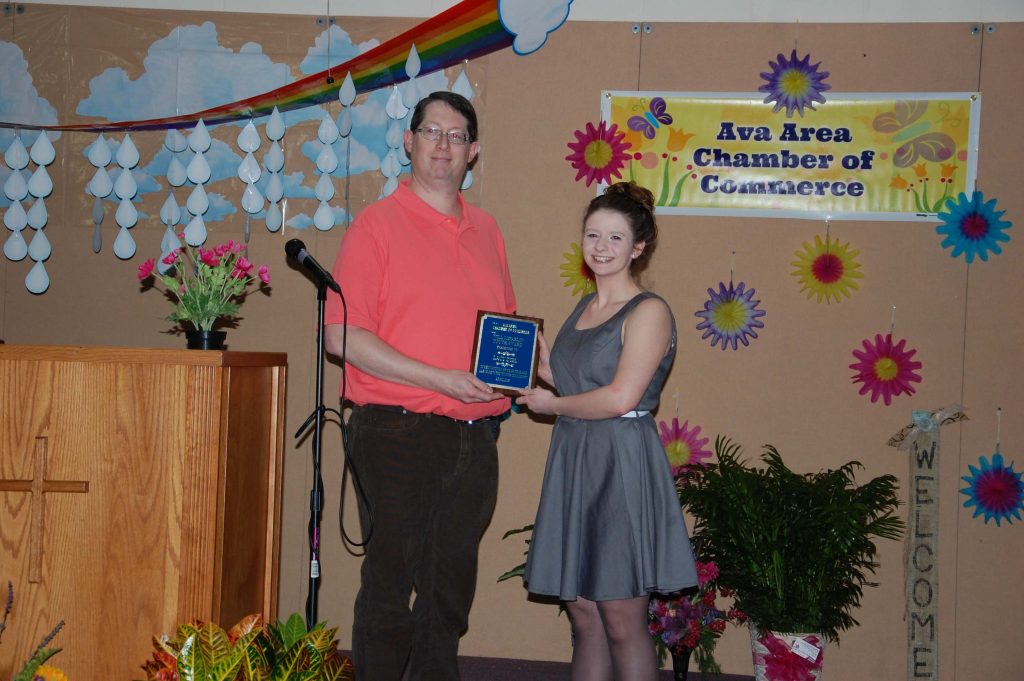 Will McFarlin presents the Will McFarlin Youth Award to Lacy Diel at the Chamber of Commerce Banquet on April 11.

The annual Membership and Awards Banquet of the Ava Area Chamber of Commerce was held last Saturday night at Ava Victory Academy.
A highlight of the program was the presentation of the John N. Dickison Award which was presented to Carol Cunningham.
The Will McFarlin Youth Award was presented to Lacy Diel, a sophomore at Ava High School.
Musical entertainment was presented by vocal and string students of Mrs. Barbara Deegan who will be presenting concerts at the Ava Performing Arts Center next week.
String students will perform on April 21 and vocal presentations will be on April 30. Judy Shields, executive director of the Chamber of Commerce was program emcee and announced door prize winners throughout the evening as well as winners of the silent auction.
Members of the board of directors were also recognized, along with outgoing board members.
Special recognition was given to Max and Wanda Murphy who provide free office space to the Chamber, and prizes were given for the best dressed man and woman depicting the banquet theme, “Spring Picnic.” Award winners were Peggy Charchol and Danny Letsinger.
Food awards were presented as follows: Best dessert, Carol Cunningham; best veggie dish, Darlene Sorensen and best casserole, Lesa Berger.
Chamber of Commerce Volunteer of the Year Awards were presented to Richard Sturgeon and Caryl Posada-Stillings.
Will McFarlin presented the Youth Award established in his honor several years ago.
Marie Dickison Bristol presented the John Dickison Award named in honor of her late father.
Following are excerpts from letters of nomination presented on behalf of the two recipients.
Will McFarlin Youth Award
Lacy Diel, a sophomore at Ava High School, is a prime example of a student leader within our community. She has consistently exhibited her leadership skills through her involvement and leadership in various high school activities/clubs (Future Business Leaders of America, Student Council, Volleyball, Anchor Club, Cheerleading, Dance Team, Future Farmers of America, National Honor Society, and Pep Club) while still maintaining a high GPA and being a role model to other students.
Lacy was elected by the student body at Ava High School to be the first ever, student representative on the Ava R-I Board of Education.  Since that time, Lacy has facilitated a meeting for students struggling in academics and has served as a mentor to some of those students.  Lacy is in the planning stage of beginning a peer tutoring program at Ava High School.
Within the Ava community, Lacy has been involved in numerous community service project activities through National Honor Society.
She is a true inspiration to those around her.
John N. Dickison Award 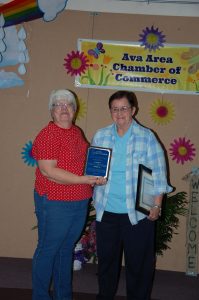 Carol Cunningham consistently provides a remarkable service to the community of Douglas County through her ongoing volunteer involvement.
Her dedication from 1980 through 2010 was outstanding as the Community Service Representative of Ozark Action, Inc., where its mission is to coordinate and provide services for low income, elderly, and disabled individuals by way of energy assistance, commodities, HUD housing, emergency food, home weatherization, family support, and property tax credits.
Carol’s volunteer work has occurred at a variety of levels:
• DoCo Sheltered Workshop Board Member for 2 years
• FEMA Board Member for 8 years
• VFW Auxiliary Member for 26 years
• Secretary/Treasurer of Ava Saddle Club for 5 years
In 1972 she played a supporting role in establishing the Ambulance service in Douglas County.
Since 1996 she has served as Board President of Douglas County Public Health, known now as Missouri Ozarks Community Health which was started in Ava, then expanded into Gainesville, Mansfield and Cabool. MOCH provides medical, dental and behavioral health clinics. In the winter of 2010 the Wellness Center was opened.
Carol brings tremendous energy, attention to detail, hard work and unique ability to organize each and every endeavor as president.
She also had a part in establishing and has been a member for many years of Douglas County CHART (Community Health Assistance Resources Team), which is dedicated to helping Douglas County residents achieve better lifestyles.
Recently, in 2014, Carol was inducted into the Missouri Fox Trotting Horse Breeders Association Hall of Fame, along with her husband, Don, as long time owners, breeders and exhibitors of Missouri Fox Trotters. She donates her time and currently serves as chaplain during the spring and fall horse shows, and was active in supporting the youth organization.  Her horses have been shown here in Ava since 1970.
Although retired, Carol still supports the community by her attendance to different charities and functions. As a resident of Douglas County for 57 years she is well deserving of this award.