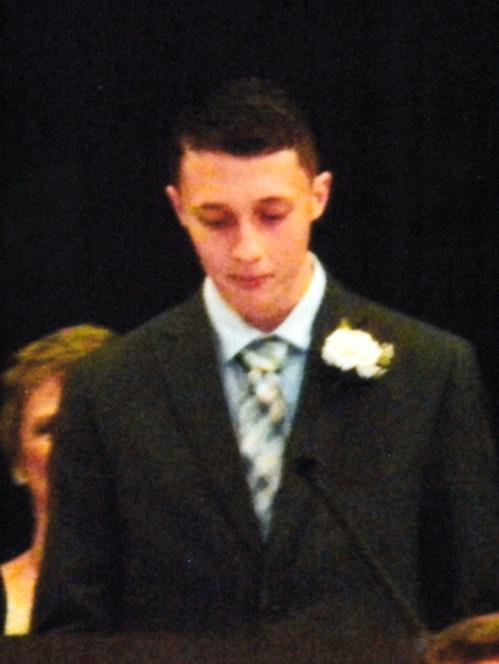 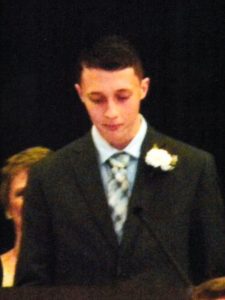 On Saturday, Jan. 31, Caleb Ball, of Lebanon, won the State of Missouri Voice of Democracy speech and essay contest. For winning state, Ball received a $2,000 scholarship and now advances to the national scholarship contest in Washington, D.C., and an opportunity to receive a $30,000 scholarship.
Following is the essay presented by Caleb Ball at the state competition.
A Peek Into a Classic
I love to read! I read many different kinds of books, but the ones I like to read the most are about our nation and her people. As I consider the veterans of our nation, I imagine their story to be a book. I imagine this book to be entitled “The Heroes of Liberty,” It is not your typical book. It does not entertain us with stories of knights in shining armor, or cowboys fighting Indians, but it highlights the most important characters of all time, those men and women who cultivate the plot of our great nation. Let us use our imaginations as we dive into the pages of this fascinating book.
The “Preface” to this book pinpoints the era when the authors of freedom struggled to draft the first copy of America. The hunger for freedom rumbled through the colonies making everyone restless. The conflict was tough and hard fought by both sides, but the authors prevailed with a masterpiece final copy-The United States of America. The protagonists or heroes of this book are the veterans. These heroes played an important role in the foundation of our country by striving for change amidst the setting of an age dominated by English control.
Their story illustrates for us that we do not have to bend to the flow of a world that is controlled by the powers of oppression, communism, socialism, or terrorism; we can remain a beacon of hope.
After the prologue, we delve into the meat of this book-the chapters. The chapter titled “The Past” displays many examples of the outstanding things that the veterans did for our country. Just a couple of those examples are the veterans who did not want a monarchy as did some of the people. They prodded for something better: rule by the people, for the people, under the umbrella of the Constitution. It has also been veterans that have protected our nation from oppression, invasion, and destruction. Turning to the next chapter we find “The Present.” The characters in this chapter are the veterans who live in your neighborhood; who eat at your table; and who you know and love. Two veterans that have played an important role in my life are my Grandpas; one served as a mechanic in Vietnam, and the other served as a Drill Sergeant during the Korean War. Each time they share their stories of hard work and dedication, I am inspired to be more like them. I think I can say without any doubt that all of you have a veteran who has impacted your life. The veterans of “The Past” and “The Present” help set a national stage for the chapter entitled “The Future.” Their work effort, their good morals, and their sacrifice demonstrate for us what is needed to preserve our heritage of liberty. They give us an outline to follow in the days to come.
As we turn to the next section of this account, we stumble upon a page entitle “The Cast of Characters.” The men and women who have served in our nation’s military have always been the main characters of “The Heroes of Liberty.”
Listed on this page are people like George Washington, who fought bravely during the War for Independence, became a politician, and eventually owned a plantation as a loyal citizen of America. Here is Ulysses S. Grant, who led the Union forces in the Civil War and later became President; and Theodore Roosevelt who led the Rough Riders before serving his country as President. Another character entry is Sergeant Alvin York, who rushed a machine gun nest in World War I, capturing many prisoners single handedly. I find a famous actor, Audie Murphy, who became one of the most decorated soldiers of World War II for his bravery on the field of battle during the invasion of Sicily and capture of Rome.
These are famous examples, but all veterans are important. Current veterans listed have become politicians, scientists, doctors, first responders, business owners, and productive citizens. The list goes on and on … Hey! Isn’t that your name right there? I see many of your names here! It is filled with pages of veterans in uniform and even some who can no longer fit into their uniform.
Let’s turn the page. Wait! It is blank! These pages are blank so that we can finish the book with our own stories. We are all the authors of this book, and we will be the ones who determine the theme of our nation. We must fill the pages with tales of bravery, stories of kindness, and acts worthy of honor. The veterans of this best-seller have not only filled the preface, the chapters, and the cast of characters with their heroics, but they have also readied us to change the future of the world. I know I will strive to make them proud. Will you?