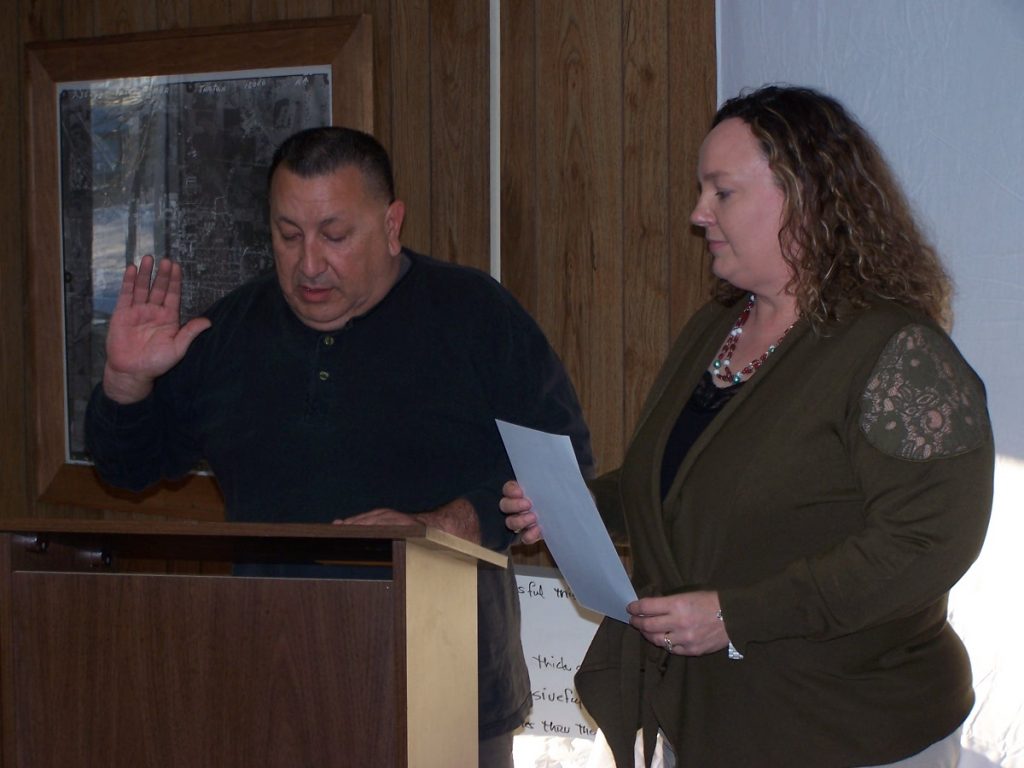 Tom Woods of Ava was installed as fire chief of the Ava Volunteer Fire Department on Tuesday. The oath of office was administered by City Clerk Suzanne Welsh, right, during city council meeting.

The Ava Board of Aldermen convened on Tuesday afternoon for a brief session of city business, as council members proceeded to fulfill the task of confirming Mayor David Norman’s selection of Fire Chief for the City of Ava. Norman’s recom­mendation to council was Tom Woods, of Ava.

According to city ordinances, the Mayor of Ava selects the individual to fill the fire chief position, and councilmen then vote to confirm or deny the candidate.  A new fire chief is being appointed due to the resignation of the current fire chief, Keith Moore. Moore tendered his resignation last council meeting.

In Tuesday’s meeting, motions to nominate Woods were given by councilmen Burrely Loftin and Stan Lovan. The vote of the council, however, was split with Loftin and Lovan voting in favor, and councilmen Keith Jones and Bill Long opposed. Norman broke the tie by voting for the appoint­ment.

Following the vote, Woods was administered the oath of office by City Clerk Suzanne Welsh, and volunteer fireman Scotty Upchurch was designated as assistant fire chief for the City of Ava.

During closed session, the board accepted an early retirement resignation from Janice Lorrain. Lorrain has been employed with the City of Ava for 16 years, and her departure as director of development is effective March 27.

Also, the board discussed a liti­gation issue, a personnel problem, and voted to increase pay for two employees.

Administrative Director Peggy Porter advised the Missouri Inter­governmental Risk Management Assn. (MIRMA) audit had been re­cently completed, and the City of Ava was 100% in compliance.

In a 4-0 vote, councilmen author­ized the mayor to execute an agree­ment with Anderson Engineering, Inc. for the design and construction of sidewalks along NW 5th Avenue and NW 7th Street.   The sidewalk improvement project is being im­plemented under a grant partnership with MoDOT.   The motions were by councilmen Loftin and Long.

Bids for plug­ging and abandoning well No. 7, south of Ava, were reviewed and of the three offerings received, the council unani­mously selected Layne Christensen Co., of Kansas City, Mo., as the lowest bidder with a cost factor of $18,965.

The remaining two submissions were from Flynn Drilling Company of Troy and Rolla, Mo., for $20,793.75; and Harper Drilling Co. of Clinton, Mo., for 27,050.00. Councilmen Loftin and Long made motions to select Layne, and the vote was 4-0.

Mayor Norman revisited the LED street lighting project, and council’s ven­dor selection for the upgrades. The mayor noted the City of Ava did not select the lowest bid by choosing Howard lighting fixtures. Norman said the Cree fixture was the lowest bid, but that particular fixture was 50% heavier and less efficient, as they only allow for two bulbs. In contrast, the Howard fixture holds four bulbs and projects a wider and bolder beam of light. Norman said the Cree fixtures were more difficult to install.

Ava City Council will reconvene on Tuesday, March 10, at 5 p.m. at City Hall. The meetings are open to the public.