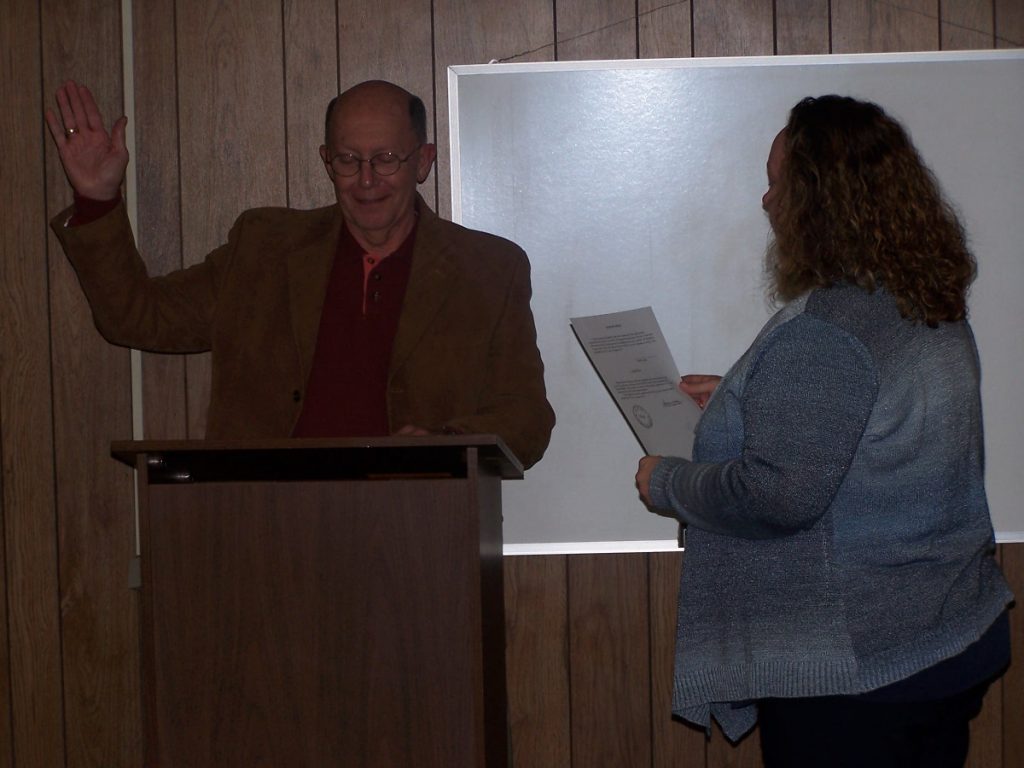 The Ava Board of Aldermen convened Tuesday, Jan. 27, at 5:00 p.m. with Burrely Loftin, east ward alderman, presiding over the initial part of the meeting. But, prior to addressing any business items on the agenda, the councilmen voted 3-0 to appoint David Norman, west ward aldermen, as Mayor of the City of Ava.

Norman, a mayoral candidate in the municipal election, is running unopposed for office; consequently, council opted to install Norman as mayor, rather than continue with a temporary or interim situation. In addition, Stan Lovan, who resides in the west part of Ava, was selected as candidate to fill the west ward seat vacated by Norman.

After reciting the oath of office, as administered by City Clerk Suzanne Welsh, both office holders assumed positions on the board.

Administrative Director Peggy Porter provided updated financials to the board, along with a six-month update on funds, and balances. Porter also provided information on the city’s current water and sewer rate charges, and the proposed charges recommended in the latest analysis performed for the City of Ava. Porter said the water rate is close to the recommended mark, but the sewer rate for city services falls short, and needs to be adjusted. At present, the city’s base rate applied for sewer is 17.38; whereas, the rate advocated in the survey jumps up to 25.46.   Council concurred the rate must be adjusted and suggested a 10% increase March 1, 2015, with plans to implement a 10% increase each year thereafter. Porter said she would look at the rates and figures, and draft a resolution for council to consider.

Director of Development Janice Lorrain reported the capping of well No. 7 must be planned or completed by May 1, 2015. Lorrain said the process requires the city to complete a competitive bid process, and for that to occur with adequate time, it needs to start now.

Lorrain also asked permission to pursue two additional projects: the State Aviation Trust Fund grant for resealing the airport runway, and updating building codes to comply with 2012 codes, as needed. She explained the runway grant will be earmarked for 2017, but if the city does not revise the building codes, the city’s rating drops significantly. Council advised Lorrain to proceed with the projects, but asked for the building code revisions to be studied individually, so it is easier to decide what codes are suitable for Ava.

Lorrain said the city’s waste water treatment permit expires September 2015, and the new application is due March 21, 2015. She recommended submitting the application March 1 instead, as this allows extra time to address issues that might arise.

Kurt McGee, building inspector, reported the Ava Water Park pool repairs discussed at the last meeting can be completed by city employees. With the board’s recent decision to implement a temporary fix, McGee said he felt certain city employees can fix the areas, and save money on the repairs.

Mayor David Norman said the on-going negotiations with Syspro, a new business interested in the Rawlings building is still underway. Norman praised Emerson Climate Technologies for working alongside the City of Ava, in the effort to make it happen. He said building cleanup continues, and final details have not been set, but all parties are diligently working together to make it happen.

In other business, council voted to change the bank signature card at Town & Country Bank and remove the signature of former Mayor Eddie Maggard. In turn, Mayor David Norman will be added.   The vote to revise the card was 4-0, with motions from aldermen Bill Long and Keith Jones.

Also, the municipal court docket was approved with a 4-0 vote, with motions by aldermen Long and Jones.

In closed session, a personnel issue was discussed, but no votes or actions transpired.

The next council meeting is set for Tuesday, Feb. 10, with open session starting at 5:00 p.m. Meetings are held at City Hall, and sessions are open to the public.