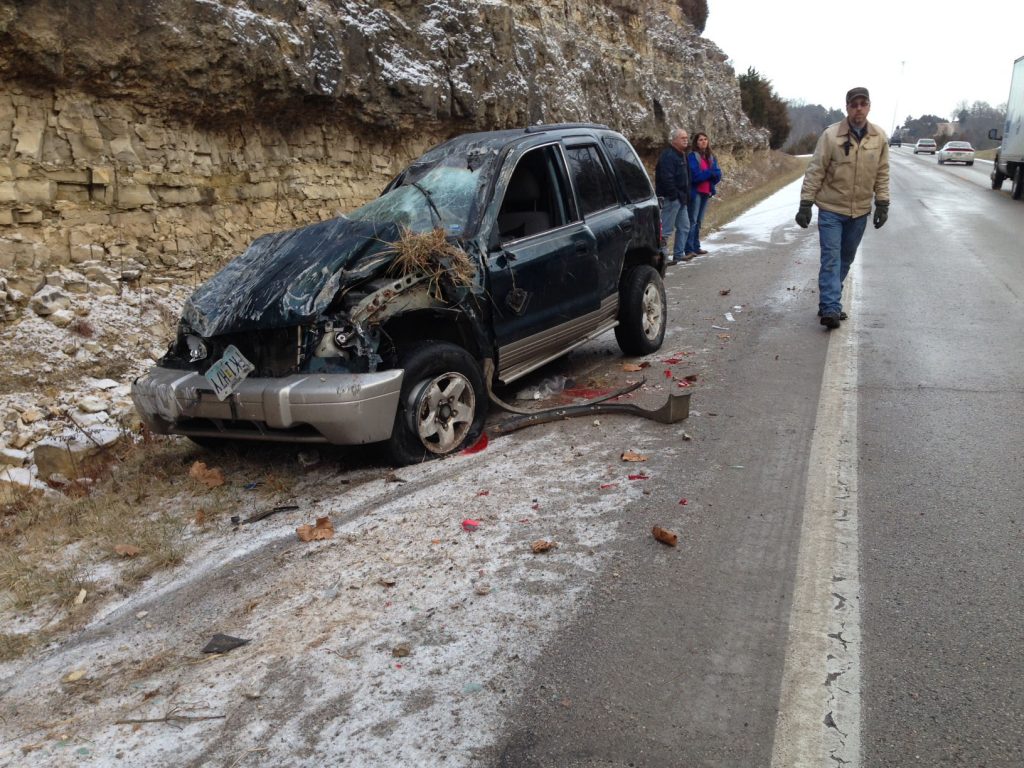 The driver of this SUV was seriously injured in a crash last Thursday morning north of Ava. Witnesses said that section of highway was treacherous due to a thin coating of ice that formed on the roadway.

All roads were not icy last Thursday morning and those that were didn’t stay slick for long as the temperature warmed above freezing. But for a time, some roads were very treacherous due to a thin layer of ice that formed during the early morning hours.
One serious crash occurred four miles north of Ava on Highway 5, sending a 31-year-old Ava man to a Springfield hospital.
The Missouri State Highway Patrol said Tyler J. Shull was traveling north on Highway 5 at 7:45 a.m. when his 2000 Kia Sportage slid out of control, struck a rock embankment and overturned, partially ejecting the driver.
Witnesses to the crash said the SUV flipped several times end over end, but that was not documented by the Highway Patrol.
Shull was treated at the scene by EMS personnel with Cox Ambulance – Ava before being airlifted to Cox South Hospital in Springfield.
Ava Rural Fire Department first responders assisted ambulance and law enforcement at the scene of the crash, and extricated the driver from the wrecked vehicle.
Following the wreck, Shull was admitted to the neurotrauma intensive care unit. According to family members, he was released from the hospital this week, but remains in a guarded condition.
On Friday, Jan. 16, at 9:30 p.m., Thomas C. Sprague, 53, of Drury, suffered serious injuries when he crashed his 2000 Dodge Caravan on Highway 95 south of Drury.
The Highway Patrol said Sprague was traveling north when he failed to negotiate a curve, ran off the roadway and struck a fence and 11 tombstones in the Pleasant Home Cemetery.
Sprague was taken to Mercy Hospital in Springfield by ambulance.