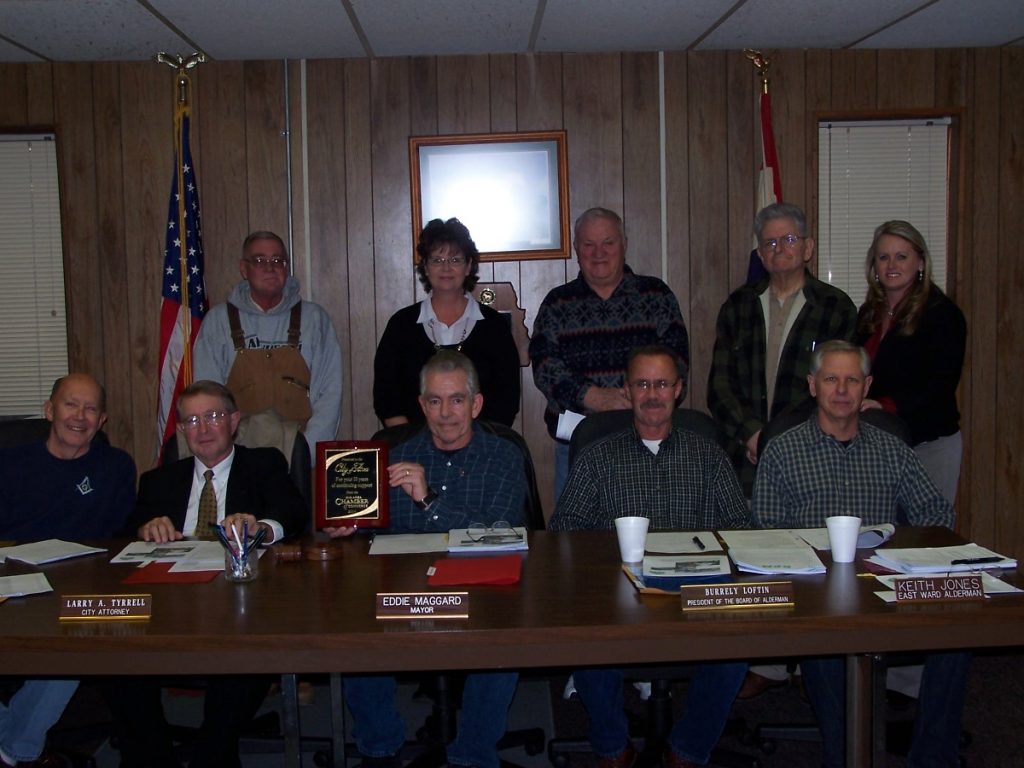 Ava Board of Aldermen accepted Mayor Eddie Maggard’s letter of resignation Tuesday, the notice was presented to council members after a closed session segment of the meeting.

According to City Clerk Suzanne Welsh, city officials and council members adjourned to closed session on Tuesday, and following a brief discussion of a legal issue and court case, the aldermen reconvened into open and Maggard tendered his resignation.

Several members of council, and other city employees became aware, in August or September of last year, Maggard had pursued employment with a manufacturing plant in Marshfield, Mo. As per information received from the City of Ava, Maggard acknowledged his on-going position with the company on Tuesday and his intentions to accept a more permanent position with the firm. Council unanimously accepted the resignation letter and final work date in motions given by aldermen Burrely Loftin and Keith Jones. In the letter, Maggard cited Friday, Jan. 16, as his last day at the city.

With the mayor’s absence, the president of the board of aldermen is responsible to fulfill the office of mayor and assume responsibilities. This transfer of power remains until a new mayor is elected, or aldermen opt to pursue other actions.

As an elected official, the mayoral position provides an annual salary of $17,999.80; the office holder also receives a monthly expense check of $915.00. Annual compensation for the office totals $28,979.80.

The owners of Syspro, a company that manufactures and sells pre-fabricated wall elements and core insulation panels, appeared before council members to express their desire to establish a corporate office, showroom and manufacturing site in Ava, at the Rawlings building. Jim Vineyard and Casey Blau stated the company has selected Ava as their location citing “we want to be here,” if all the details can be worked out to the satisfaction of all involved.

The company wants to lease the west end of the Rawlings building, utilizing 13,000 sq. ft. However, at present, the unknown factor is that the new company must also have access to use two of the six dock doors on the west side of the building, and to do that, Emerson Climate Technologies who presently rent the dock area and use part of the adjacent building for storage, must agree to the dock use.

Alderman Burrely Loftin noted the City of Ava is ready to install a wall between the dock doors for privacy, and to provide a secure area for the two companies to work separately within the same loading dock area. Loftin said his intentions were to discuss the issue with the plant manager of Emerson Climate Technologies as soon as possible, so a decision could be reached and the City would know how to proceed.

Councilmen also discussed other options for creating a dock delivery area for the new company, as well as installing a standard ‘walk-in’ entry door that also qualifies under federal rules for disability requirements.

Vineyard and Blau said January is their target start date, and they are ready to move forward as soon as possible. The company has several contracted orders lined up and ready for production.

Loftin said the City will do their best to meet the needs of the group, and he hoped to have an answer on the dock issue by the end of the week.

Administrative Director Peggy Porter said the City of Ava needs to set a plan or goals to address the concerns expressed in the auditor’s letter of recommendations. Porter noted three topics were pinpointed for adjustment, they are:

Councilman Keith Jones said after meeting with Peggy and Janice Lorrain earlier in the day, and acquiring a better understanding of the financials, he recommended the City of Ava address the failure to establish reserves, by starting small and setting aside monies to cover three-months payroll, and growing the account from there.

Jones also recommended the City should start paying on the inter-fund loan in two years, when the final payment is made to the Ava Industrial Development Corporation (AIDC) for the Rawlings building. Once the AIDC note is paid, Jones said, those monies may be redirected to pay-off the inhouse loan amount over a three-year or six-year time frame.

Jones made the motion to adopt the proposed financial plans, and Norman supported the motion. The vote was 4-0.

In a 4-0 vote, with motions by Loftin and Jones, council authorized city participation in the Energy Loan Program with Missouri Department of Economic Development / Division of Energy. The program allows the City to use funds totaling $99,330.00 and replace the present streetlights with energy efficient bulbs with a life-span of 20 years. In the agreement the City agrees to make semiannual payments equal to one-half of the annual energy savings until the promissory note is retired. Bulb replacement will focus on the high-wattage bulbs on the main thoroughfares in town.

The aldermen approved a request from the University of Missouri Extension council members asking for assistance with the program’s 2015-16 operating budget, and a donation of $10,000.   This special item was in the city’s budget for the year, and council approved with a 4-0 vote. Motions were by aldermen Norman and Long.

The aldermen tabled a request from the newly formed Summerfest committee. The group was asking the City of Ava to partner in the event and continue the relationship as previously established with the local Chamber office; however, the council concluded more information was needed before a decision could be reached.

In a 4-0 vote, council agreed to pay for a partial repair, and general paint job for the city water park pool and site. Following up on a prior discussion Tuesday evening, the board deemed it too expensive to implement a pool project and paint repairs totaling $80,474.29, and in addition, an epoxy concrete repair for $5,833.22, when the pool site could ‘get by’ one more season with less expensive maintenance. Instead, the aldermen asked for bids on a partial repair and paint project.

Administrative Director Peggy Porter said Summit Natural Gas had recently sent a letter to the City informing of a 20.04% increase in natural gas rates. The letter said the increase was effective Dec. 2014.

The Municipal Court Docket dated December 19, 2014, was approved as presented. Aldermen Bill Long and Burrely Loftin made the motions, and the vote was 4-0.

City Clerk Suzanne Welsh noted the City of Ava has a new web page design, and asked councilmen to review the site. Councilmen Jones asked Welsh to include a notation on the site for the animal shelter, and upload photos and details about the dogs and cats needing placement.

Council reconvenes on Tuesday, Jan. 27, 5:00 p.m. at Ava City Hall. Meetings are open to the public.