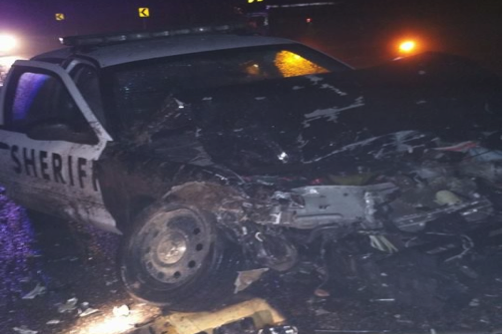 A high-speed chase on East Highway 14 early Saturday morning by Douglas County deputies resulted in the crash of a county patrol car and injuries to both officers.
Sheriff Chris Degase said just after midnight on Jan. 3, Deputy Gabe Stroud and detention officer Taylor Wallace were on patrol in an area where suspected drug activity was believed to be occurring.
As a vehicle left a residence in that area, Deputy Stroud attempted to make a traffic stop.  The driver of the vehicle sped away, attempting to elude the officer.
Approximately two miles out of Ava on East Highway 14, the driver of the fleeing vehicle lost control, turning around in the road, resulting in a collision with the officers’ vehicle.
The two officers were able to exit their vehicle and arrest the driver, Trevor Pippin, age 21, who was found to have a felony warrant out of Stone County and a warrant for probation violation out of Jefferson City.
The officers were assisted by Deputy Chris Page and Missouri State Highway Patrolman Jason Philpott who were responding to give assistance when the crash occurred.
It was later discovered that the vehicle that Pippin was driving had been stolen from a residence in Ava.
Both Stroud and Wallace were taken to Cox South Hospital in Springfield where they were treated for moderate to minor injuries.  Deputy Stroud is currently on light duty and Wallace has returned to regular duty.
Pippin received no injuries and was transported to the Douglas County Jail where he is held on the existing warrants and awaits further charges.
On unrelated incidents, the Douglas County Sheriff’s Office is currently looking for Matthew Lane, 39, and Michael Bailey, 37, for outstanding warrants. Currently there are 29 inmates in custody in the Douglas County Jail.
During the week of Dec. 29 to Jan. 4, the Douglas County Sheriff’s Office answered 80 calls for service, and arrested and booked 15 into the Douglas County Jail.
If you have information regarding a crime or any information on the location of the above listed subjects, you are encouraged to contact the Douglas County Sheriff’s Office at 417-683-1020.