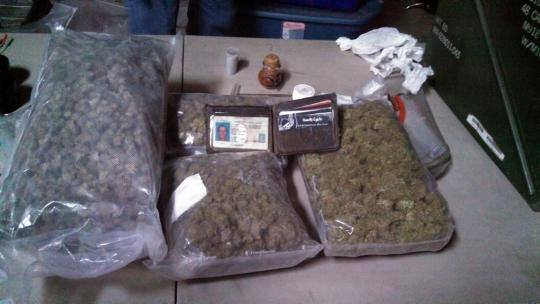 Processed marijuana and other related paraphernalia are shown in the photo above, which was submitted to the Herald by the Douglas County Sheriff's Office.

The Douglas County Sheriff’s Office investigated a reported shooting on Dec. 18 that resulted in a drug bust at a residence in eastern Douglas County.
The sheriff’s office received a call around 10 p.m. stating that a 2-year-old male had been shot in the leg. Numerous deputies responded, along with first responders from Eastern Douglas County Volunteer Fire Department. Mercy Ambulance from Wright County was also dispatched to the location.
The child was transported to Ozarks Medical Center in West Plains, and was then transferred to Mercy Hospital in Springfield.
While on this call officers seized several pounds of commercial marijuana with an estimated street value of approximately $6,000. Charges in this case are currently pending.
During the weeks of Dec. 21 and Dec. 29,  the Douglas County Sheriff’s Office answered 76 calls for service, and arrested and booked 10 people into the Douglas County Jail for various charges.
John Galloway, 48, was arrested in Howell County, on a Douglas County warrant for failing to obey judge’s order regarding charges of domestic assault 2nd degree-prior offender, felonious restraint, and unlawful use of a firearm that occurred in June of 2014.
Galloway is currently being held without bond pending a bond revocation hearing.
According to Sheriff Chris Degase, as of the final week of 2014, the Douglas County Sheriff’s Department has received and responded to 4,007 calls this calendar year.  That is an average of 333 calls per month, or 11 calls per day.
Officers are currently looking for Matthew Lane, 39, and Michael Bailey, 37, for outstanding warrants.  Currently there are 17 inmates in custody.
If you have information regarding a crime or any information on the location of the men named above you are encouraged to contact the Douglas County Sheriff’s Office at 417-683-1020.